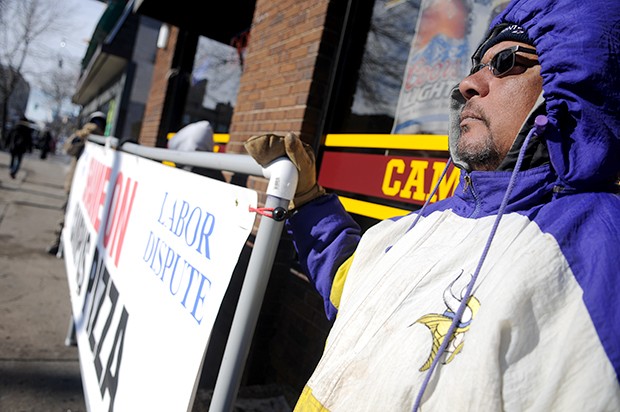 Disgruntled laborers who declined to give their names or comment hold up a sign outside outside Campus Pizza on Washington Ave reading, "Shame on Campus Pizza."

The North Central States Regional Council of Carpenters picketed Monday outside the future Campus Pizza and Pasta location, under construction in the Stadium Village Mall. The protest, however, had nothing to do with the menu. Herb Jacobson, a business representative for the NCSRCC said the union was protesting because Friedges Drywall, the sub-contractor chosen to install drywall in the new restaurant, is driving down labor standards in the area. The unionâÄôs wage package for their commercial metro carpenters is $33.79 per hour in gross taxable income plus $12.50 in fringe benefits, including health care and pension, Jacobson said. Todd Friedges , one of four brothers who own Friedges Drywall, said his employees wouldnâÄôt be working for him if he was treating them unfairly. He said his company pays a slightly higher hourly wage than the union, but the fringe package is considerably smaller. He covers 100 percent of his employeesâÄô health care, but if they want their families covered, the employees have to pay for it. Jim Rosvold , the owner of Campus Pizza, said the protesters have the right to protest, but that he also had the right to hire the contractor of his choice. âÄúI got three bids, and Friedges was the lowest qualified bidder,âÄù he said. Eighty-five percent of the work on the new location will be done by union members, Rosvold said. Union contractors are doing the plumbing, tiling and other work. Rosvold said he is aware of the possibility of his business being the target of protest, but it doesnâÄôt change his decision. The union has been protesting Friedges Drywall jobs across the area for several months, Friedges said, including work for the city of Apple Valley, a church in Faribault , a dentist and others. âÄúWhen workâÄôs tight and workâÄôs slow, everybody fights for all the work they can get, and they feel that in Minnesota you should be union to work, and we feel different,âÄù he said. Friedges Drywall has been picketed in the area before. In 1996 and 1997, the Carpenters Council of Southern Minnesota passed out leaflets for several months in front of Brueggers Bagels bakery locations around the Twin Cities, promoting a boycott of the chain for hiring Friedges.