From Los Angeles to Minneapolis, Kylie Miller hopes to fill role for Gophers

The UCLA transfer has one year of eligibility left to mark her mark for the Gophers. 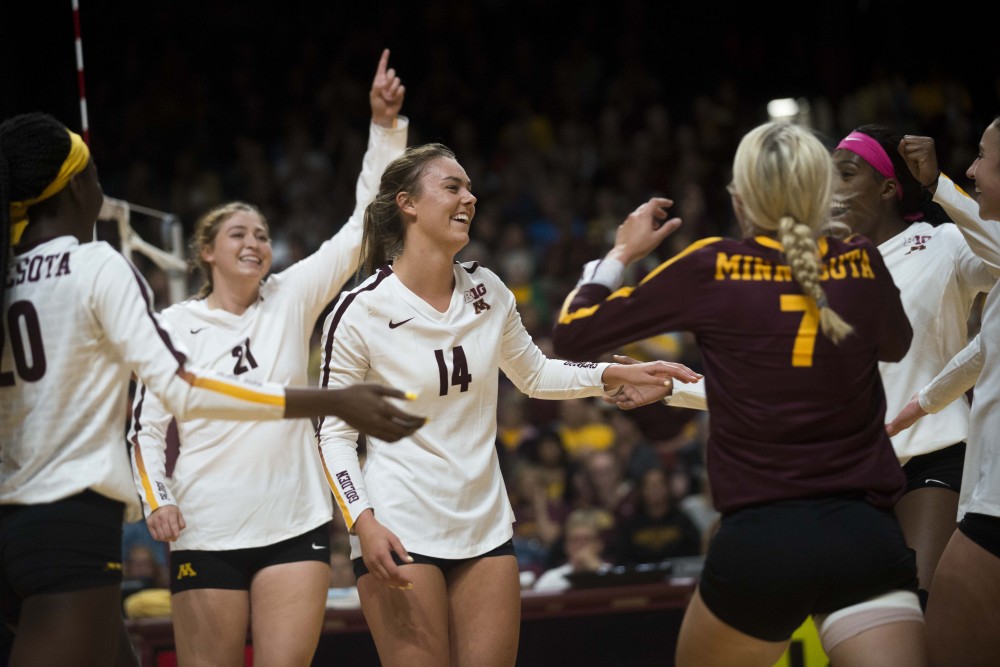 Setter Kylie Miller celebrates a scored point with her team at the Maturi Pavilion on Saturday, Sept. 7. The Gophers defeated Florida 3 sets to 0 for their home opener.

Coming off their Sweet Sixteen loss last season, the Gophers volleyball team knew they would return every starter from their 2018 roster — every starter except Big Ten Player of the Year, Samantha Seliger-Swenson.

The loss left the program tasked with finding a replacement for the first team All-American setter, and it wasn’t long before they did. In January 2019, Head Coach Hugh McCutcheon announced the addition of two transfer students: outside hitter Airi Miyabe and setter Kylie Miller.

Miller, a graduate of Rancho Cucamonga High School in Southern California, initially stayed close to home to play for UCLA, where she was an effective player for the Bruins. In her three seasons there, she recorded 34 aces, 211 digs and over 1,200 assists. After the Bruins’ 2018 season, Miller decided it was time for something new and traded the beaches of California for opportunity at Minnesota.

“It’s definitely a big change for me because I’m a home girl,” she said. “I was blessed to have the opportunity to play for these coaches, and these girls are so awesome. [With] the fans, and the atmosphere, I just thought going out my senior year playing here would be really fun.”

Miller will only have one season to play for the maroon and gold, but she spent her first semester at the University last spring. In that time, she had the opportunity to build relationships with teammates, travel with the team to Japan, adjust to a new campus and experience the harsh Minnesota winter. The Californian arrived just in time for a polar vortex that dropped temperatures in the Twin Cities lower than 50 degrees below zero adjusted for wind chill.

“That was kind of a shock, but I made it through,” Miller said.

Now, Miller has her first four games as a Gopher in the books. The Gophers are 2-2 over that stretch and have already played two top-ten opponents. After her performances against Texas and Florida, Miller was named the Big Ten Setter of the Week. In those two matches, Miller recorded 79 assists, 14 digs and three aces. This marks the first time Miller has won a weekly conference award in her collegiate career.

“I think she’s played well,” McCutcheon said. “It’s nice to get that recognition, but we got a long way to go. It was good for her to get a little love this early in the season and certainly well deserved.”

Miller likely appreciates the recognition of her excellent performances the last two matches, but she has more ambitious goals for her senior season than winning weekly conference awards.

The Gophers’ path toward their goal will continue this weekend at the Big Ten/Pac-12 Challenge. They’ll take on two more top ten opponents: No. 10 Oregon and No. 1 Stanford.