The conservative author and columnist spoke to a crowd of about 300 on Tuesday evening. 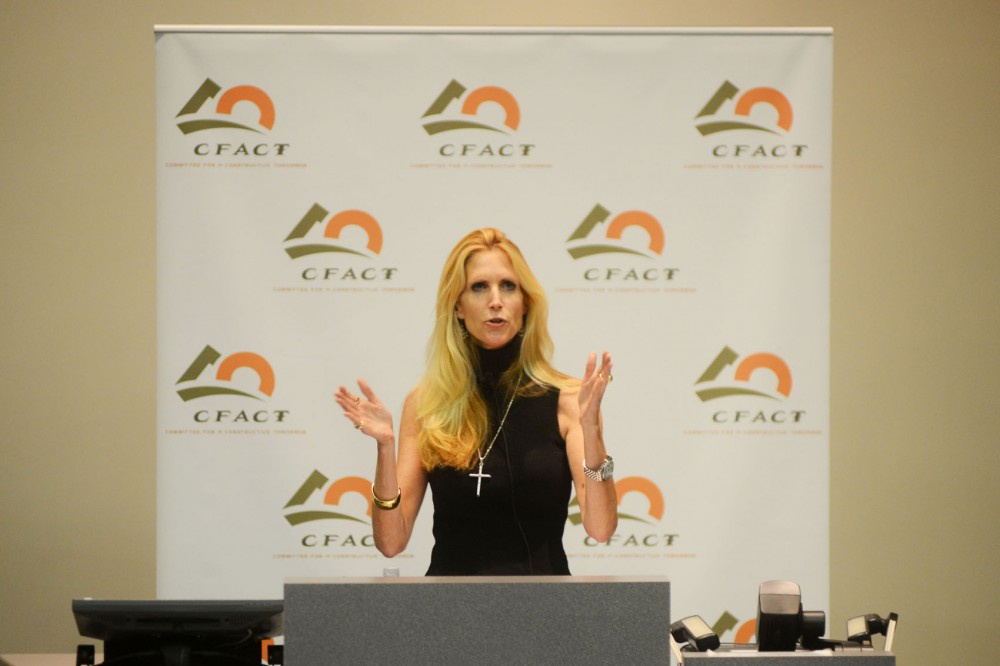 Outspoken conservative author and pundit Ann Coulter, was met with support and some opposition at her speech in Willey Hall on Tuesday night.

The speech glided through a number of controversial topics — including health care reform, gun control and immigration — infusing anecdotes and jests met, mixed reactions from the crowd

The event was partially sponsored by two University student groups, but it was mostly older community members who filled about 300 seats in the West Bank auditorium. Only a handful of students uninvolved with the sponsoring organizations attended, and many of them weren’t Coulter supporters.

Collegians for a Constructive Tomorrow, the larger of two student groups co-sponsoring the speech, declined to comment for this story. Students for a Conservative Voice was the other group.

Political science sophomore Mason Schraufnagael said it’s beneficial for the University to hear from conservative leaders like Coulter, who he thinks are often underrepresented on campus.

“I think it’s important we are here and to acknowledge ideas that we don’t really see a lot ’cause most of the campus is liberal … even if we don’t agree with it,” he said.

Tuesday’s visit was one of Coulter’s regular speaking engagements at college campuses and other venues. She’s promoting her new book, “Never Trust a Liberal over 3 — Especially a Republican.”

Coulter visits campuses frequently, and she’s been met with stern opposition at times.

Though Tuesday’s speech was a relatively quiet affair, tight security kept an eye on Coulter for the duration of the event.

When talking about economics, Coulter used an extended metaphor to describe left-leaning people’s capacity for learning.

Hyperbolic speech and jokes about race and other controversial topics littered Coulter’s speech.

“I obviously thought she was crazy. … I realize now why people have such a negative view on [conservatives]; it’s too bad,” he said.

Still, some students like Kyle Klausing, a political science and Spanish sophomore from the University’s Morris campus, said it’s positive for students to hear from a variety of voices.

Klausing said he was personally happy to see someone he’s followed on TV for years.

“She’s been someone who I followed for a long time, and I enjoyed hearing her speak on TV,” he said, “so now I have the opportunity to see her live.”