An uptick in violent crime has made students and others uneasy about neighborhood safety. 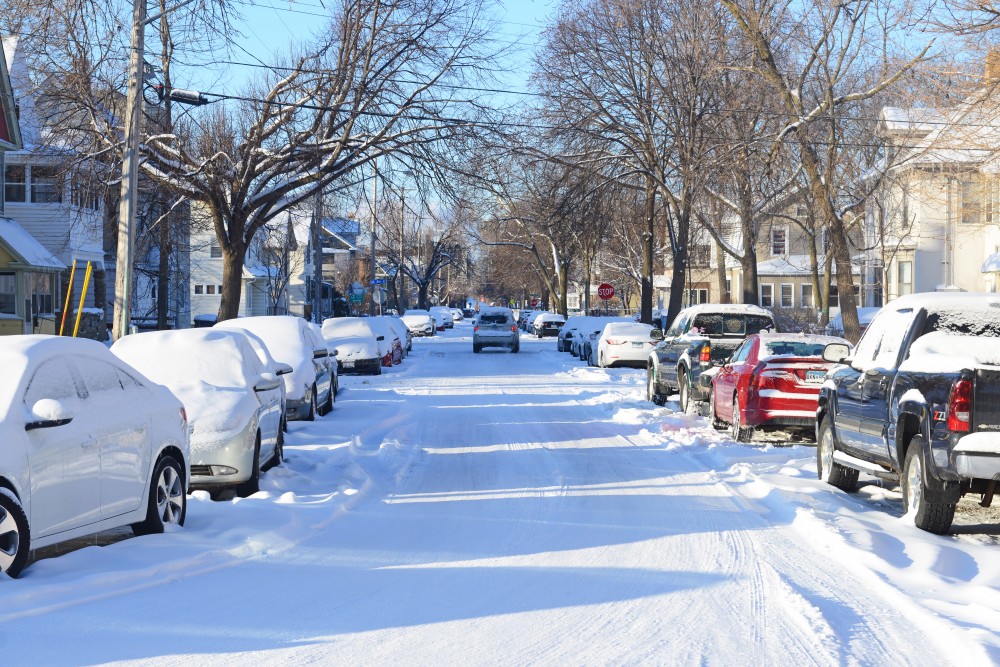 Parked cars along 12th Avenue Southeast in the Marcy Holmes Neighborhood. Auto thefts in Marcy-Holmes are up 38 percent from last year.

Maria Sanchez, a third-year Ph.D. student at the University of Minnesota, was in her Marcy-Holmes apartment one afternoon in January when she looked outside and saw a group of men running into her building brandishing guns.

After calling 911, she learned the men were undercover Minneapolis Police Department officers executing a search warrant, but the incident left Sanchez and her dog Rosie traumatized. The warrant led to one arrest on drug and firearm offenses.

In the weeks that followed, crimes in the area including a double homicide, attempted sexual assault and a shooting in her building’s parking lot eventually led Sanchez and her boyfriend to break their lease last week and move into a more secure apartment in Northeast Minneapolis.

This uptick in crime prompted the Marcy-Holmes Neighborhood Association to hold a safety meeting with MPD officials and City representatives Thursday. Residents living in buildings where the crimes took place voiced concerns about recent incidents and apartment management.

Robert Sayers, a fire inspector from the City’s regulatory services department, acknowledged that current apartment management in the neighborhood does not meet the City’s standards.

“Renters are parts of our community, period,” Sayers said. “But oftentimes renters are viewed kind of second-class here in Minneapolis.”

Sanchez said the management of her building at 410 6th St. SE. did not take security concerns seriously.

“I do think the problems in our apartment building were exacerbated by the fact that management was not very present and communicative with residents when incidents would happen,” Sanchez said.

Ryan Rainey and Laura Checovich attended Thursday’s meeting. The couple lives across the street from the spot where a University student was assaulted on 8th Street Southeast on Feb. 8.

Checovich said the assault was alarming because she regularly walks her dog in that area.

“It sounds like this person is just going about their regular daily commute and they were exposed to that level of violence,” she said.

The recent incidents have caused the two to re-evaluate their perception of Marcy-Holmes.

“Living here, especially in this neighborhood, I think it’s fair to say that we always felt very safe. The events of the last couple of weeks have kind of changed that for us, I think,” Rainey said.

“Part of what we need to do in any kind of a response to public safety issues is build community and this meeting is a really good start,” Fletcher said.

In response to the incidents, MPD has increased police presence in the neighborhood, Loining said.