Defy the weather and your friends’ pleas to spend the weekend day-drinking. Take a walk (and climb and run and tumble) through Minnehaha Regional Park. 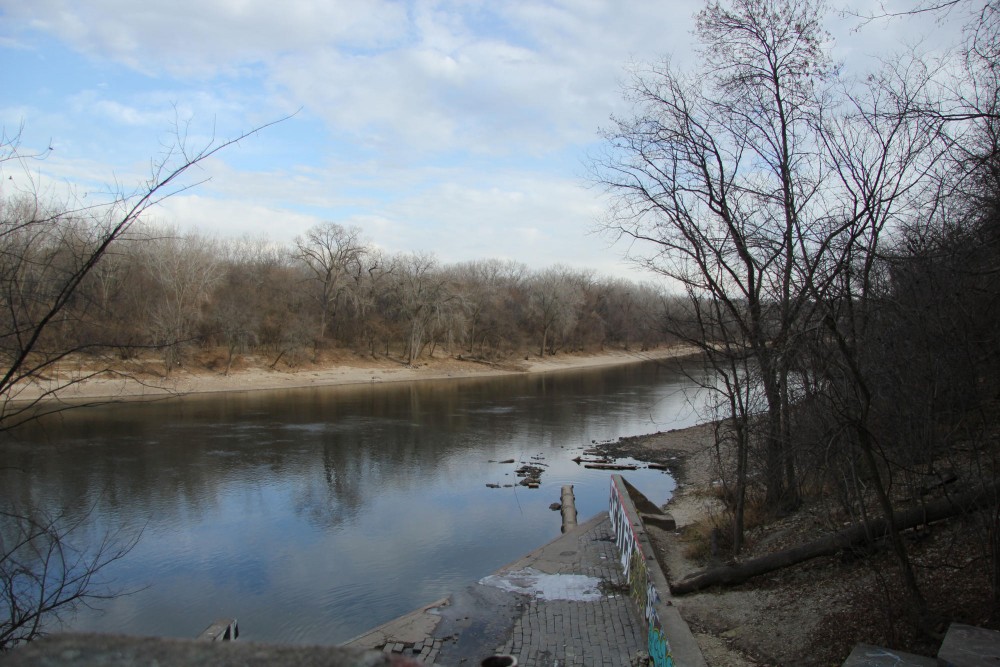 Minnehaha Park has enticed people from all over Minneapolis to get out into nature and explore.

Minneapolis and St. Paul may garner their share of flak from bigger cities such as Chicago and New York, but the truth remains: We live in a multi-million human metropolis. The size and density of the urban space around us can be overwhelming and bewildering, ostensibly inaccessible. New students easily fall prey to the warm seduction of nights spent indoors drinking or gaming, and in doing so squander the greatest resource that the University of Minnesota has to offer: the Cities themselves.

It is easy to use ignorance as an excuse, let the world pass by unengaged because no one is there to hold your hand and guide you through it. DonâÄôt worry, we wonâÄôt let that happen ever again: Grab ahold of our ink-stained paw, and come along on an adventure!

A&E frolicked through Minnehaha Regional Park this weekend, and proudly brings you the how-to highs and lows of a true Minneapolis gem.

The fastest and cheapest way to get to Minnehaha is the light rail, with a stop just blocks away from the UniversityâÄôs West Bank. From the Washington Avenue Bridge go straight past Middlebrook Hall until you hit Riverside Avenue, and take a right. Follow Riverside as it angles left past Mixed Blood Theatre (the old firehouse on the corner), and walk parallel to the Riverside Plaza (those lovely pastel towers) until you hit the light-rail station. Use your U-Pass if you have one, otherwise the kiosks take most denominations of cash for the $1.75 fare.

Grab a train heading south toward the Mall of America and the airport, and get off at the 50th Street/Minnehaha station (it will be the fifth stop in your direction of travel). Cross the street carefully, step into the park and breathe in the fresh air: ItâÄôs time to plug into the landscape and experience the ebbs and flows.

The walk to Minnehaha Falls is a solid introduction to the park, steeped in history. As you follow the path forward and left from the entrance you pass by the John H. Stevens House, transplanted here from its original foundation near the Hennepin Avenue Bridge. Credited as being the first permanent wood-frame dwelling west of the Mississippi, the well-preserved edifice is reminiscent of the wildness that once graced these shores and the tenacity of the settlers who would reorder that wildness forever. The path continues under wooden trellises to the top of the falls, and then heads down stairs to your right for a grand view. Just before you pivot to descend, take a look ahead of you on the path. Suspended on a post is a weathered mask of Chief Little Crow, victim of the 1862 Dakota conflict, and it paints a different face on the history of white settlement.

Interpretations of the past buzzing through your mind, climb down to the base of Minnehaha Falls and let the roar of tumbling water clear your head. During the spring this, 53-foot waterfall is monstrous, overwhelming; as the summer wears on into fall it slows to a trickle. During the winter a mountain of frozen water blankets the cliffs, and affords a singular experience. Should you choose to ignore the âÄúno trespassing signsâÄù and tread carefully along the right side of the falls you can find a path that leads behind the icy walls. Continue into the seasonal cave and bathe in an otherworldly blue glow caused by light refracting through impurities in the ice.

After trippinâÄô out behind the falls for as long as you need, climb back and follow the path along the creek. The grand intensity of the falls, with their thunderous cymbals and noisy bombast, fades away as you approach the first bridge on your path. Hop rocks to a vantage point under the bridge and look upstream toward the falls. A host of little rock towers lay stacked in the stream, redirecting the current into tiny singing eddies and whorls. The quieter music of the creek here is more nuanced than the explosions of the falls, and the interplay of river and rock paints vivid images on the waterâÄôs surface.

At this point you face a decision based on how the last section of creek inspired you. If you are with your friends and feeling antsy, the huge field to your left is perfect for Frisbees, footballs, snowmen and sleds. If the water drew you into a more introspective state, the next section of trail continuing along Minnehaha Creek is teeming with wildlife âÄî keep your eyes open. Squirrels, raccoons, possums and even beavers fill out the furred forces, while woodpeckers, songbirds and the occasional bald eagle add feathers to the scene. Take a look into the creek itself: Minnows and turtles keep things interesting under water. The best vantage point for viewing critters depends on the season âÄî during the warmer months (all one and half of âÄôem) try sitting in the creek itself, propped up on some rocks. When itâÄôs chillier out there are a number of great climbing trees on the path, many with excellent seats a few meters up.

About halfway down the path lies one of the great challenges of the park: the VeteranâÄôs Administration Bridge. It breaks the flow of the park a little, forcing the concept of human enterprise back into this little slice of nature. Thankfully, we all know that there is only one way to transcend human structures âÄîthrough individual action. So, if you are feeling outraged or betrayed at this point, assert your agency over the situation and climb the bridge, savoring the view.

The girders can be accessed by climbing up either slope to the point where they meet the valley sides, and scaling from there mostly involves straddling the beams and shimmying up. This is not for the faint of heart or inexperienced, and if you are not fully confident in your ability to climb this based on prior climbing, then donâÄôt. DonâÄôt wreck the heart of everyone who loves you, donâÄôt make it harder for the rest of us to adventure. Also, be advised that this is illegal, so if you choose to engage in a little system-shaming you might get slammed.

Regardless of your stance on the great human footprint, the next focal point of the park is beautifully striking. An exposed face of sandstone cliff on the right side of the creek heading downstream has been carved out by decades of people with sticks and rocks, leaving huge ochre-hued divots in the rock wall. Covered in names, dates and exclamations, this wall is a testament to the thousands who have explored these paths before us. Add your part to the puzzle and carve out a new cave, or climb up using the hand-and-footholds that someone before you used to get their name higher than everyone elseâÄôs. The stone is unstable, so donâÄôt go too high, but the view up there is pretty cool.

VII. The Truth of it All

The path disappears into a beach as the creek gives its life to every riverâÄôs final resting place, the Mississippi. Looking upstream to the north you see the massive Ford Dam, a leash placed on nature that the railroad bridge and sandstone carvings were alluding to all along. Swim in the Mississippi if you like, just stay really close to shore âÄî even at thigh-height the water moves fast enough to pull you out for good. Otherwise bring a fishing rod and see what the waters have left to find. Then, move on to the final piece of this puzzle,

On the right side of the beach is a huge concrete wall, which slopes down to meet the Mississippi. Scaling the wall is imperative, and you have two options. For the more experienced scramblers there are two trees (one skinny and one fat) that lean up against the wall, about halfway between the river and the slope. Put your back to the wall, wrap the skinny tree with your legs and shimmy up to the top. Once youâÄôre there, reach around until you find the big iron lug, and use it to pull yourself up.

For the less experienced, there is a corner where the wall meets the Mississippi; use the stacked rocks to get up and shimmy around on the iron bar. What you will find on the other side is truly awe-inspiring. A huge metal gate keeps watch over a tunnel boring back deep into the cliff sides, flanked to the left by rising steps covered in gorgeous street art. You can swing the gate out a little with a friend to enter the tunnel, filled with a rushing waterfall and even more phenomenal graffiti. Take in the perfect spray paint canvass for a while inside and out, then head back to the light rail at your leisure.

Minnehaha Park is a beautiful but challenging place, a landscape that forces you to consider distinctions between man and nature, past and future. It has a beautiful flow âÄî the dense introduction surrenders to a canonshot opener, which drops you into introspection and quiet beauty. The intensity builds as you move along until artwork forged into the very rock itself sweeps you away like the quick Mississippi current. Even that sprawling finale, a mess of painting so dense it would take years to fully decode, has its place at the last junction.

Despite its artistic flow, Minnehaha is highly accessible. On warm days there are yuppie families swimming side-by-side with South Minneapolis middle-schoolers and Hmong fishermen. Everyone can find something about the park to enjoy, even if some of the more esoteric pieces go underappreciated. A beautiful collaboration between the Minneapolis Park and Recreation Board and the Mississippi River gorge, I believe that Minnehaha Park will weather the tests of time. Until all that sandstone erodes at least.