The Gophers faced off against Penn State in a rematch of the 2018 Big Ten Championship. 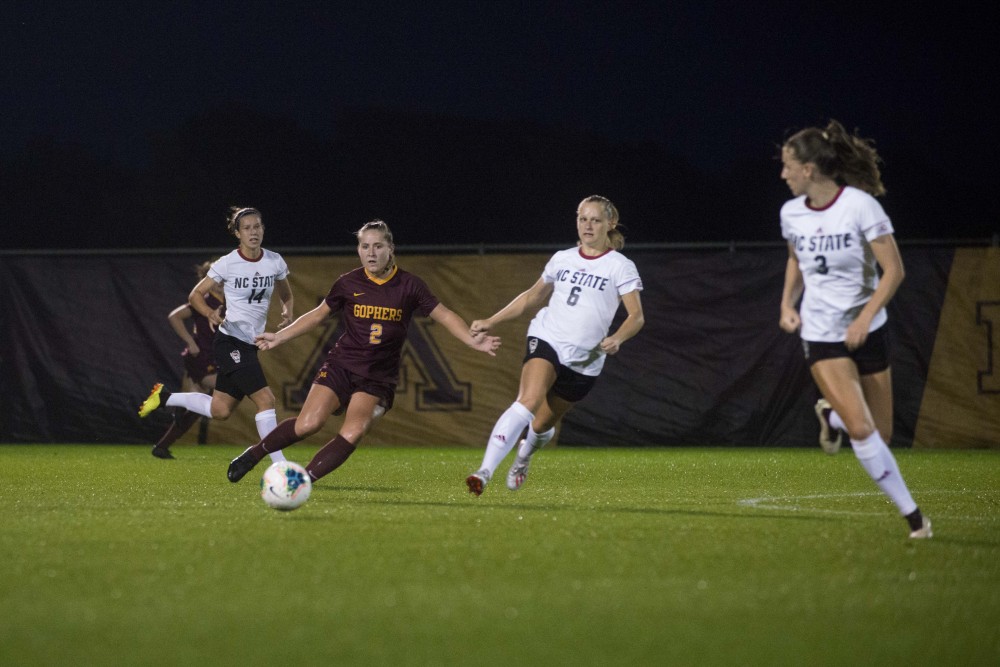 Minnesota continued conference play Friday against Penn State in a rematch of last year’s Big Ten Championship, but unlike that match, the Gophers weren’t able to pull out a win, falling 0-1 at home in overtime.

Since having the best record in the Big Ten last year, Penn State’s roster has seen major changes. The Nittany Lions lost five seniors to graduation, including 2018 Big Ten Midfielder of the Year Emily Ogle.

However, most of the production that Penn State lost has been made up by one redshirt freshman, Ally Schlegel, who has generated almost the same percentage of their goals as all the seniors did a year ago combined. Heading into Friday’s game she had seven goals, and stopping her was paramount to the Gophers’ success.

While Minnesota held Schlegel and the Nittany Lions to just one shot on goal in the first half, Schlegel was the able to put one past Gophers’ goalie Maddie Nielsen to win the game in overtime.

The loss drops Minnesota to 1-8-2, which has been a frustrating start for team that set out with many goals this fall.

“We’re not looking at goals that we set in August anymore. … We have one goal right now and that goal is top eight. Our goal is to continue to put the passion, the effort, the work rate where it needs to be to get results so that we can get into the top eight and we can find a postseason,” said co-captain Nikki Albrecht.

Despite the loss, Minnesota still had encouraging moments. Gophers’ sophomore Alana Dressely was a central pillar of the defense in the game. She started and played the entirety of regulation.

“She’s one of the best individual defenders that we have,” head coach Stefanie Golan said. “She is not afraid to go up against anybody, she was going against some really athletic players and she was holding holding her own there. We’ve been really, really happy with her performance.”

The Gophers also had four corner kicks in the first half, which was an advantage as it allowed the team to come into the final third of the field looking to earn a goal, Golan said.

The Gophers came back in the second half ready to work. Forward Patricia Ward had several strong offensive plays and registered the Minnesota’s first shot on goal at the 60 minute mark. Minnesota continued offensive pressure in the second half, registering two more shots courtesy of Makenzie Langdok. With seventeen minutes left on the clock Athena Kuehn had a prime opportunity at the Nittany Lions’ net off a corner kick but it missed out the right side by inches.

Despite their dominance in the final minutes, Minnesota needed extra time to solve this one against Penn State. After chances from Minnesota, Penn State was able to regain an offensive position on the field and Nielsen was unable to contain a shot on goal, as Schlegel rushed in and managed to get the ball past her to end the game.

“I definitely think the defensive end was fantastic for the full ninety minutes… and were very focused on keeping a compact shape so that the outside midfielders could just help get back and help delay with pressure,” said Albrecht.

Albrecht also spoke on how being able to come back and speak with the team’s sports psychologist helped them re-focus their goals as a team to improving their rank in the Big Ten.

Golan echoed the sentiment and said it’s difficult to have a season where you are playing well but results don’t fall your way.

“This team I love them so much and my heart bleeds for them every time that we’re in this position after a game,” Golan said. “Penn State is favored to win the conference and we were right there and we put ourselves in positions to win, and it’s heartbreaking to not get the result.”

The Gophers will be back at Elizabeth Lyle Robbie Stadium on Sunday, playing against the Ohio State Buckeyes at 1 p.m.