U interns look to Senate for experience, not payment 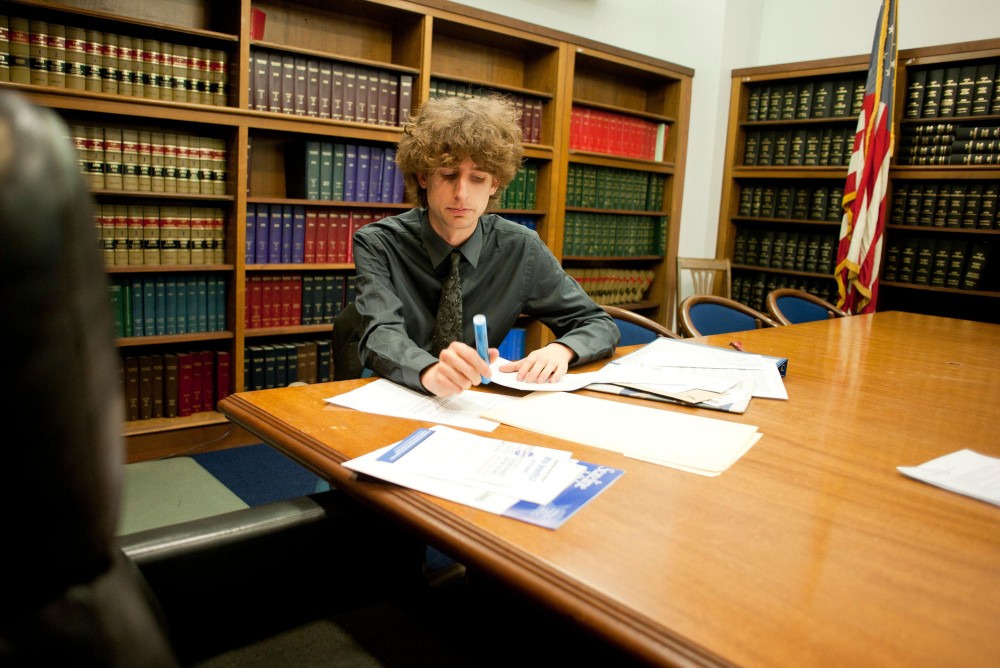 Political science major Alex Hellweg reviews a constituent's letter to Sen. John Harrington, DFL-St. Paul, on Tuesday at the State Office Building in St. Paul. Hellweg and other legislative interns will no longer get paid for their time.

Alex Hellweg sat poring over a pile of constituent letters to Sen. John Harrington on Tuesday, mulling over how to respond as best he could in HarringtonâÄôs voice.

Hellweg, a University of Minnesota senior who spends 24 hours a week at the State Office Building as an intern for the St. Paul senator, doesnâÄôt get paid for his time âÄìâÄì a result of cuts made to the Senate budget early last week. Students who previously interned for the Senate were paid weekly.

âÄúI would like to get paid,âÄù Hellweg said, âÄúbut IâÄôm doing this for the experience. I didnâÄôt even know it used be paid in the past.âÄù

John Trombley, assistant director of the Minnesota Senate Information Office, said in the past the weekly stipend given to interns, about $75 per senator, was for transportation, food and clothing. Some parking is provided to interns, but they must buy their own coat and tie to be on the Senate floor.

Some senators have multiple interns and would have to split the stipend.

Hellweg, who lives close and walks to his internship, said he might be more concerned about not getting paid if he was âÄúfinancially squeezedâÄù and had to drive every day.

On an average day, Trombley said interns respond to constituent letters, sort mail or do research on proposed legislation. Interns typically work with legislative assistants because of how busy legislators usually are.

Hellweg, who began working last week, said so far he answers an average of 10 constituent letters a day while working on other miscellaneous tasks.

Because Hellweg is in his final semester at the University, the six-credit internship is his only course. Since interning is unpaid, Hellweg works two days a week at the National Student Exchange on the University campus.

The program has an average of 70 interns per session, Trombley said. At least 40 students are usually from the University of Minnesota with additional students from Macalester College and Hamline University.

Trombley said he didnâÄôt think the cuts would affect the academic focus of the program. The number of applicants this fall was unaffected even though Trombley said students were aware that it could be unpaid.

âÄúObviously IâÄôd like to get paid but there has to be budget cuts. I feel itâÄôs a good opportunity, even if itâÄôs unpaid,âÄù economics major Monica Bartol said. âÄúIâÄôm fine doing the internship just for the experience.âÄù

Steve Sviggum, communications chief for the Senate Republican caucus, said the cut funding for interns was part of an overall $2.67 million in cuts for the biennium made by the Senate Rules and Administration Committee last week.

The cuts came from a 5 percent cut that was mandated the previous session, Sviggum said. Sviggum is also a member of the UniversityâÄôs Board of Regents.

Hellweg said the cuts didnâÄôt really bother him because he knew that some full-time staffers were going to lose their jobs and he said internship cuts were rather minor in comparison.

Trombley said the internship program has existed since the 1970s and, aside from a brief period in the early 1980s, has always been paid. State House of Representatives interns are not paid.

Wagner said he wouldâÄôve still interned even if it wasnâÄôt paid, but he acknowledged that the lack of funding could make it difficult for some students depending on their financial status.

âÄúI think that the experience is valuable regardless of whether itâÄôs paid or not. It certainly helps for going back and forth between Minneapolis and St. Paul,âÄù Wagner said.