The Slackline Club says the University has shut down its on-campus meetings several times, but the group is still growing. 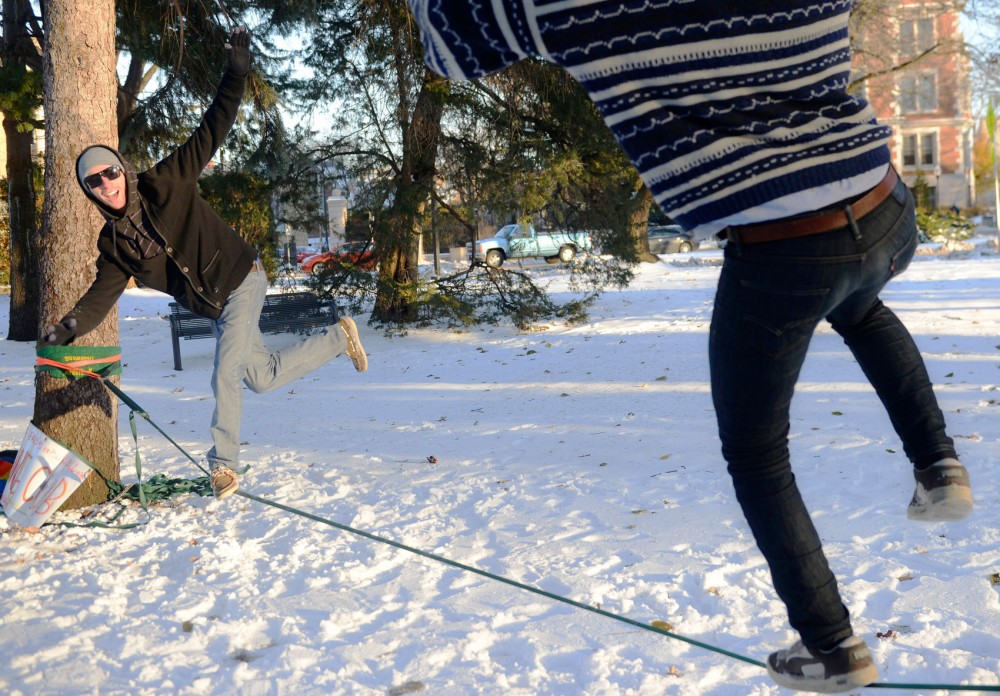 Sophomore Davis Allen, left, slack lines Friday afternoon in the Knoll area on the East Bank. The slack lining club is for students who enjoy slacklining as a hobby and a sport.

They can be seen in the Knoll area, often surrounded by a group of curious spectators, precariously balancing on a thin line that sways with the wind and bends under the weight of its user.

Sometimes, though, authority figures drive balancing students to dismount their lines before gravity does.

While popular among students who seek the physical and mental challenge of successfully crossing the line’s span, the Slackline Club said the University of Minnesota doesn’t support the student group practicing its slacking skills on campus. But aside from its conflicts with the school, the group has gained traction at the University.

In two years, the club has grown from a small gathering of 10 students to about 80 members, President David Onushko said.

But as the group has grown, interested student passersby aren’t the only ones who have taken notice of the unique sport.

Onushko said University officials have asked the club to shut down its weekly meetings a few times since it started practicing on campus consistently.

“It’s not a regular thing, but most members who are regular slackliners have had that happen to them at least once,” said the group’s vice president, Kevin O’Brien.

The group was practicing in the Northrop Mall area the first time they were told to pack up, he said.

O’Brien said a police officer told members that slacklining on campus property is considered a liability.

Group leaders then asked the Student Unions and Activities office about the incident, he said, and they informed the group that slacklining in the Northrop Mall area is considered an event by University standards. This classification requires the club to obtain a permit in order to use the outdoor space, according to University policy.

University officials could not be reached for comment by press time.

O’Brien said he and the group don’t agree with the policy.

“It’s just an activity. It’s harmless,” he said. “We’re not hurting anyone.”

O’Brien said another concern about the group’s activities came from the University’s grounds crew, who were worried that the lines would damage the trees to which they are secured.

But Onushko said the group ensures its members protect the trees when using their trunks to steady their lines.

“The trees aren’t injured as long as you’re using the appropriate [equipment],” he said.

Despite the occasional run-ins with the authorities, the group has no plans to stop practicing around campus, O’Brien said.

Onushko credits most of the group’s success in recruiting new members to its weekly meetings held outside in the East Bank’s Knoll area, where members can bring their own lines and practice together.

“That’s really been the biggest way we’ve gotten people,” Onushko said, “just being out there and being part of the community.”

And during the winter months when it’s too cold to slackline outside, the group is hoping to secure a spot to practice at the University recreation center — an idea O’Brien said the center has so far been receptive to.

He and Onushko say the public’s lack of knowledge on the sport may be why some don’t welcome the group practicing on campus.

“We’ve kind of deduced that because it looks so unique — it’s an odd thing to see somebody walking through the air — that people are kind of afraid of it, and they think it might be dangerous, it might be harmful to somebody,” O’Brien said.