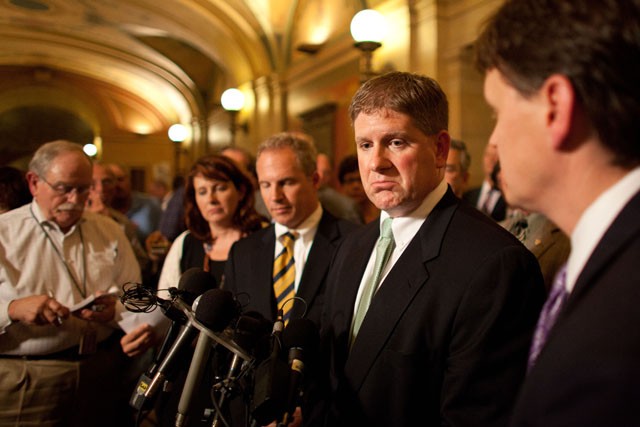 Speaker of the Minnesota House of Representatives, Kurt Zellers speaks to members of the press Thursday at the Capitol.

Days after plunging into the largest government shutdown in state history, DFL Gov. Mark Dayton and the LegislatureâÄôs Republican leaders returned to the negotiating table Tuesday afternoon, but showed no signs that an agreement to end the shutdown was near.

Local political experts say they expect the shutdown to last anywhere from a couple of weeks to more than a month.

Despite more than a week of budget negotiations behind closed doors and signs of progress as late as Thursday afternoon, both sides were unable to finalize a spending agreement before the deadline.

Larry Jacobs, a professor at the Humphrey School of Public Affairs, said if the two parties canâÄôt reach a budget agreement within the week, the shutdown may stretch into August or further.

Passing the shutdown deadline may take some heat off the legislators âÄî to the detriment of negotiations, said David Schultz, a professor of public policy at Hamline University.

âÄúA lot of the fear is gone now that weâÄôre actually in the shutdown,âÄù he said. âÄú[The shutdown] doesnâÄôt, in and of itself, provide the political incentive to reach agreement.âÄù

Schultz said he doesnâÄôt see the two parties reaching an agreement any time soon, and guessed the shutdown will last at least a couple of weeks.

While politicians wonâÄôt immediately feel the pressure to reach an agreement and end the shutdown, Jacobs said, its economic impact will eventually create voter âÄúoutrageâÄù and spur a deal. He estimated the shutdown will cost the state $20 million each week âÄî excluding lost revenue from services like state parks that have been shuttered.

In the stateâÄôs last partial government shutdown in 2005, former Gov. Tim Pawlenty and the Legislature reached an agreement in eight days.

âÄúThis is a night of deep sorrow for me,âÄù Dayton said Thursday around 10 p.m. at a press conference to announce that talks had broken down. âÄúI donâÄôt want to see this shutdown occur.âÄù

During and after the governorâÄôs speech, the blame game revved up again. GOP leaders reacted with barbed words to the governorâÄôs pessimism for reaching a budget agreement before midnight.

âÄúThis isnâÄôt about getting a budget, this is about shutting down government for political purposes,âÄù House Speaker Kurt Zellers, R-Maple Grove, said. âÄúDayton threw in the towel.âÄù

Dayton said the reason for the breakdown was the same as it had been all session: disagreement on spending and taxes. The two parties are still $1.4 billion apart, he said.

Dayton adjusted his original tax increase offer, narrowing those affected to just Minnesotans earning more than $1 million âÄî his earlier proposal would have affected the top 2 percent. But Republicans didnâÄôt budge from their commitment against new taxes.

According to the Minnesota Department of Revenue, 7,700 Minnesotans earn more than $1 million each year âÄî less than 1 percent of the population.

DaytonâÄôs latest tax proposal would net the state more than $746 million in tax revenue over the next two years, he said.

Early Thursday afternoon, both GOP and DFL leaders seemed optimistic that a budget deal was near and that a government shutdown could be avoided. But none of the proposals pushed forward were accepted, leaving the two parties at an impasse with only hours before the midnight deadline.

âÄúThe agreement was in reach as early as the early afternoon today,âÄù Senate Minority Leader Tom Bakk, DFL-Cook, said about an hour before Dayton announced negotiations had dithered. âÄúItâÄôs much more difficult now than it was four hours ago.âÄù

Republicans offered to beef up the budget by delaying about $700 million in payments to K-12 schools and issuing âÄútobacco bonds.âÄù

Both Dayton and Republicans proposed an additional $10 million be sent to the University of Minnesota. The Board of Regents finalized the UniversityâÄôs budget June 20, which includes a tuition increase, wage freezes and cuts to employee benefits.

Former University President Bob Bruininks said one-third of additional funding from the state would likely be used to soften tuition hikes in 2012.

Shortly after 8 p.m., Republican members of the House and Senate took up official seats in their chambers, waiting on the governor to call a special session that would allow them to pass a âÄúlights onâÄù bill to continue state government functions until July 11.

But Dayton has long opposed the idea of a âÄúlights onâÄù bill and kept his promise that he would not call a special session until the whole budget framework was ironed out.