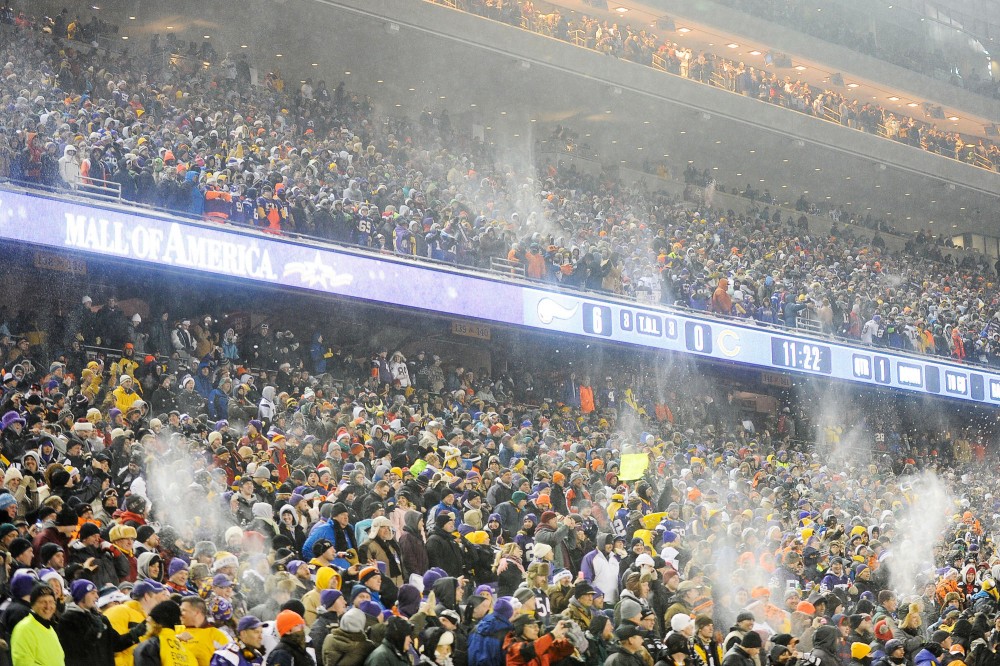 Vikings fans pack TCF Bank Stadium for their game against the Green Bay Packers on Dec. 20 2010. The Vikngs and the University agreed on a tentative arrangement for the team to return if a new stadium is built at the Metrodome site.

The Vikings and the University of Minnesota have reached a tentative deal to let the team play at TCF Bank Stadium while a new stadium near the Metrodome site is under construction.

The agreement includes adding 3,000 extra temporary endzone seats to accommodate season ticket holders. That would put the nearly 3-year-old stadium’s capacity at almost 54,000 — about 9,000 fewer seats than the Metrodome.

“We don’t have a draft agreement yet,” Vice President of University Services Kathleen O’Brien said. “But, we’ve talked through the elements and know how an agreement would be structured. It would be very easy for us to bring to a conclusion.”

That conclusion could be reached in the coming days. Gov. Mark Dayton told reporters Tuesday that a financing agreement between Minneapolis, the state and the Vikings could come next week.

Installing heating coils in the field could also be necessary, as the Vikings would be playing later into the cold months on a hard surface. Field conditions were a concern when the Vikings played at TCF in December 2010 after the Metrodome’s roof collapsed under heavy snow.

“Without discussing the specifics of the agreement, if we have to play a full NFL season or more at TCF Bank Stadium, heating coils will be necessary,” Vikings spokesman Jeff Anderson wrote in an email. “Some of the improvements will depend on the amount of time spent at TCF.”

It is unclear how long the Vikings would play at TCF. If the new stadium is built near the Metrodome rather than on the current site, the team’s stay could be shorter.

“We know this is a challenge for the University and we want to ensure compensation for any wear and tear on the stadium,” Anderson said in an email.

The stadium debate has seen a multitude of potential sites, financing options and political roadblocks. And the deal is only about to clear its first hurdle.

The Vikings had misgivings about playing at TCF previously. The team estimated that playing three years at TCF would add an additional $67 million in hidden costs, stemming from unspecified field improvements, adding parking near the Metrodome and lost ticket revenue.

While the Vikings would still be losing ticket revenue in an expanded TCF Bank Stadium, O’Brien said the building code only allows for a limited amount of extra seating based on the number of emergency exits.

The Vikings’ lease at the Metrodome expired in January. The team has played there since it opened in 1982.

Although a potential stadium deal is near, it would only be the first step before the first shovel goes in the ground. The financing plan would have to get approval from the Legislature and the Minneapolis City Council.

Lawmakers may be hesitant to vote on a stadium deal — a politically-sensitive issue — when November elections are around the corner.

In his State of the State address last week, Dayton alluded to the possibility of lawmakers avoiding a vote, saying that it would be “terribly unfair to the several thousand unemployed Minnesotans, who could be working on that project this year, and to the Vikings.”

Meanwhile, the Minneapolis City Council has been split on the stadium, but the plan has support from Mayor R.T. Rybak and Council President Barb Johnson.

Ward 2 Councilman Cam Gordon is part of the slight majority that is opposed to public financing for the stadium. He said he hopes that any deal would go to voters in a referendum — a scenario Rybak has dismissed.

“I can think of a lot of things that might be more valuable or a better investment than sports facilities,” Gordon said.

Working out the logistics

As details of a potential deal begin to take shape, University and community officials are contemplating the logistics.

Increased traffic on game days and residential concerns are among the issues that come with hosting a professional football team near campus.

Surrounding neighborhoods were a concern when TCF Bank Stadium was built, causing the University to create a mitigation fund to relieve any effects on nearby neighborhoods for the six home games the Gophers play each year.

“Having any amount of NFL games at TCF will be a stress on the neighborhoods,” said Ted Tucker, chairman of the University District Alliance.

In response to the tentative agreement, the UDA is suggesting that $1 be added to the mitigation fund for every Viking ticket sold at TCF Bank Stadium. The current fund for Gopher games is $1.5 million.

University officials are also discussing how to easily transition from Gopher games on Saturday to Vikings games on Sunday.

“It will be really important to coordinate the schedules so the Vikings have time to set up their equipment,” O’Brien said. “But also so that we don’t have a conflict of traffic for University business and Vikings business.”

However, many see the benefit the extra traffic will bring to a business community slumped by long-term construction.

“There are a lot of logistical hurdles,” Nancy Pribyl, president of the Stadium Village Commercial Association, said. “But from a business standpoint this will be a really positive thing.

“[Vikings fans] are people with more money [than students] … they’re also not people looking for a $5 difference at a parking spot.”

University officials are looking at recent examples of NFL teams playing in collegiate venues. O’Brien pointed to the Chicago Bears’ stay at the University of Illinois’ Memorial Stadium in 2002 as one example.

“Combined with our own experience hosting large events, we came to a basis on our tentative agreement,” she said.

While many seats stayed empty during the Vikings’ snow and slush-filled game at TCF, some fans are excited about the prospect of outdoor football.

“TCF [Bank Stadium] would be a nice change for Vikings fans and a good thing for us. When supply drops that typically drives demand up,” said Brian Obert, co-owner of the fan site VikingsTickets.com “I know I’d love if it happened, but I’m not sure it will. TCF is a nice, beautiful environment and the Metrodome is a dump.”

—The Associated Press contributed to this report.