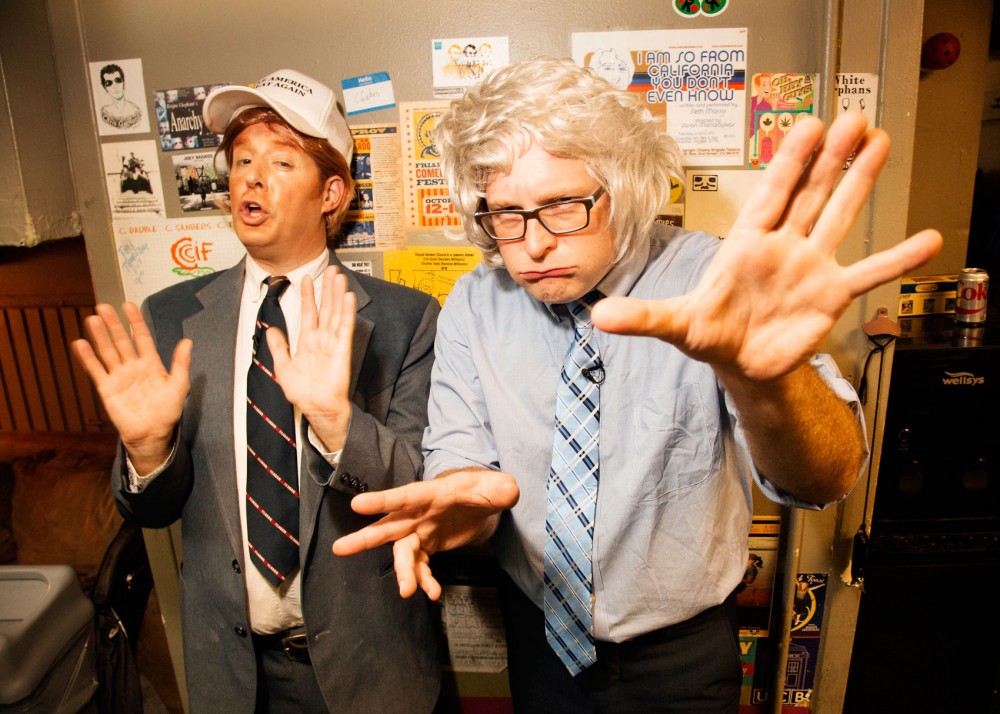 by Austen Macalus
If you’re disappointed after missing Bernie Sanders speak at the RiverCentre in St. Paul last week or saddened by the absence of Donald Trump at the last Republican debate, here’s a pick-me-up.
On Feb. 3, both anti-establishment candidates go head-to-head in a structured debate right here in Minneapolis.
Sort of.
“Trump vs. Bernie: The Debate!” is set to play at Mill City Nights this Wednesday.
The satirical show features James Adomian as Bernie Sanders and Anthony Atamanuik as Donald Trump.
Structured like a perennially familiar televised debate, complete with a moderator and unscripted questions, the show is in the middle of a national tour, which extends to Feb. 29.
After performing the characters separately, Adomian and Atamanuik joined forces to create “Trump vs. Bernie.”
Performing together allows Adomian and Atamanuik to play into the absurdity of recent political debates — which they compared to professional wrestling.
“We are both playing heightened characters, but I am playing for the audience to like me and he is playing for the audience to hate him,” Adomian said.
Well-versed in performing sketch, stand-up and impression-based comedy, Adomian explained the Sanders impression came quite naturally.
“I always had a Bernie impression in my back pocket,” Adomian said. “When he announced he was running for president, I realized that it was my chance to debut it.”
So far, the public has been supportive of Adomian’s take on Sanders; he has appeared as Sanders on “@midnight” and performed at various Sanders comedy benefit shows for the past year.
He attributes that, in part, towards Sanders’ unique style and message.
“People have an affection for him because he is kind of grumpy but very honest,” Adomian said. “It’s one of the traits about Bernie Sanders that people react most positively to.”
He compared Sanders to a crazy college professor “that somehow got loose and is running for President.”
Trump Enters the Debate
Until last September, Adomian had performed only as a solo act. Then he met Atamanuik in New York City.
Atamanuik is a longtime member of Upright Citizens Brigade as a co-host of its flagship show, “ASSSSCAT 3000,” where he first started impersonating Trump.
“During the show, someone addressed me as ‘Mr. President,’ and I thought it was a funny idea to be Trump, so I did him for the scene,” Atamanuik said.
Atamanuik’s diverse comedy background provided him with a solid base for the impression.
“Improvisation often requires us to either be ourselves or to do compelling realistic characters. … I was often doing solo character bits that were knock-off characters,”
Atamanuik said. “Instead of doing a Judge Judy, I was doing Judge Jonie. … Making them in our world, but sideways.”
According to Atamanuik, he was primarily concerned with capturing Trump’s essence.
“I led first with the bravado and the sort of dismissiveness he has. And once I had that at the core … I started to what you would do in sports — the tale of the tape,”
Atamanuik said, adding that he not only watched rallies and speeches but press interviews and old television appearances, too.
Playing someone as notorious as Trump, he said, has its perks.
“The things you can say are far more open and dangerous,” Atamanuik said. “I have the opportunity to take the ugliness in what he says and sort of show the absurdity of that ugliness.”
But Atamanuik said he still approaches the character with a serious level of empathy.
“Part of being honest with yourself is understanding the despicable part of yourself,” he said. “I know there is a part of all of us that is [Trump].”
Delete Image
Align Left
Align Center
Align Right
Align Left
Align Center
Delete Heading