The club's gear was donated by Microsoft and they offer students opportunities to learn more about the future of technology. 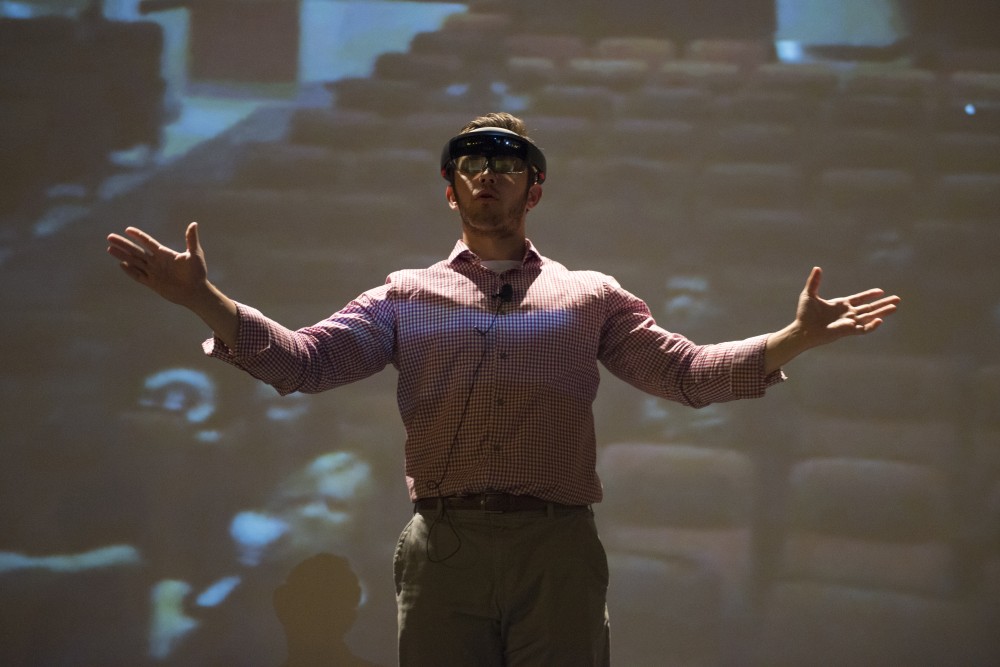 Brandon Bogdalek, officer of the University's Augmented Reality Collective, demonstrates how to use a HoloLens, an augmented reality device, at the group's meeting in the Coffman Memorial Union Theater on Oct. 9, 2016. The device is one of a few devices the group works with.

A new campus club was recently outfitted with thousands of dollars in futuristic gear by Microsoft.

The Augmented Reality Collective (ARC), which first met Monday night, is where students got a chance to see the $3,000 headset in action. As they gathered to watch demos of the gear, ARC President Dan Yao told the group augmented reality is the future, and this was their chance to get on board.

That future will include seamless integration of technology into everyday life, said Brandon Bogdalek, biology senior and ARC’s corporate relations officer. At the meeting, Bogdalek showcased how the Microsoft HoloLens can show users anything from a Netflix movie to a model of the solar system on a wall or in the air before them.

“AR [augmented reality] is something you can do in the daily sense,“ Yao said. “I wanted to bring AR to campus … and bring this field to the University.”

At the meeting, Bogdalek said AR is predicted to reach a value of $120 billion as a field by 2020, making it exciting even for those not involved in its technical side.

“That’s a lot of money, and to be able to to use such a cool technology and to maybe have a piece of that — I think anybody would be excited about those numbers,” he said.

The club began when Yao worked on his senior design project with Microsoft, where they showed interest in helping to form an augmented reality club.

The opportunity to work with Microsoft and potentially others is a give-and-take relationship, he said, where the club is expected to find and develop new applications that use the technology.

To hold their end of the bargain, Yao said the club has three project teams on top of general membership. These teams are highly selective, akin to a job, and will each develop a new application for an augmented reality device by the end of the year.

Yao said the club is working to form a similar relationship with Google, but first they need to prove what they can do.

Bogdalek said he’s also had preliminary discussions with Worrell, a medical technology company he interns for. He and Yao said they’ve also reached out to local companies such as Target for partnerships.

“The biggest challenge right now … is getting businesses to understand the potential of augmented reality,” Bogdalek said.

As a biomedical engineering student, freshman Jamie Walters said she was blown away by their presentation.

She first gained exposure to the technology by playing virtual reality games with friends. Not long after, she started to realize the expanded potential for the similar, but more versatile, augmented reality.

“I knew when I came to the U … I would want to do something with that technology,” she said. “I am absolutely mind-blown … it’s so uplifting to think there’s an opportunity to [help grow the field.]”

During the presentation, Yao, spurred by comments about the money possibilities in the field, jokingly asked, “Who wants to do a startup?”

Yao said he and Bogdalek have discussed creating a start-up before, but added that everything is just talk at the moment and his focus is on the club.

“What I want to see is just massive amounts of potential being built through this group,“ he said.