Hudson Fasching’s brother and sister are his inspiration and his biggest fans. 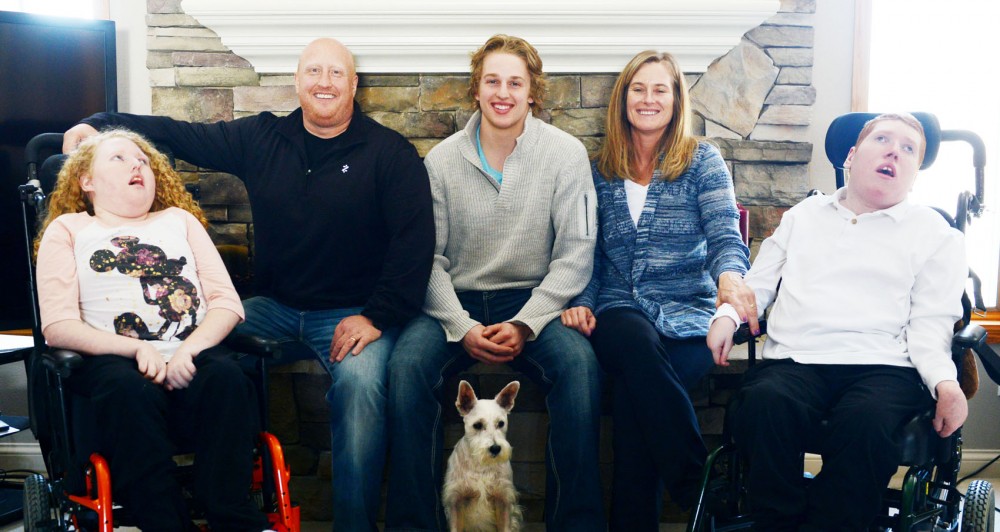 The Fasching family photographed at its Burnsville, Minn., home March 2. Hudson Fasching, middle, is a forward on the Gophers men's hockey team, and his two siblings, Mallory, far left, and Cooper, far right, have a condition that leaves them unable to walk or talk and requiring round-the-clock care.

A typical Sunday afternoon at the Fasching household looks like that of many Minnesota families.

Hudson Fasching sits with his parents and siblings in the living room of their Burnsville home — a gas fire blazing and an NHL game playing on the TV.

It’s normal for the Faschings, but to outsiders, it may not seem that way.

Hudson is a phenom freshman forward for the Gophers men’s hockey team, starring on the first line in his first year with the team.

His younger siblings, 16-year-old Cooper and 15-year-old Mallory, lounge in wheelchairs, with their feet resting on Goldy Gopher pillows.

Cooper and Mallory were born healthy, but seizures for Cooper at six weeks and vomiting for Mallory at six weeks indicated that something was wrong.

While parents Rick and Shannon Fasching still don’t know the exact problem, doctors called it a mitochondrial disorder when they diagnosed Cooper.

Those doctors said there was a one-in-a-million chance of it happening a second time. But against all odds, it did.

“We hit the jackpot with Mallory,” Shannon said.

That mysterious condition has left the two unable to walk or talk. They are fed with formula through a tube and require constant care.

While Hudson spent large chunks of his youth in and out of hospitals for his siblings or helping his parents take care of them, he doesn’t view his life as being unusual.

“People ask me, ‘Is it different?’” Hudson said. “It’s normal for me, so I don’t really know anything else.”

Hudson may be the local celebrity of the family after a standout high school career and a two-year stint with the U.S. National Development Team Program led to a starting spot with the Gophers. But Cooper and Mallory don’t live in their big brother’s shadow.

Cooper isn’t a stereotypical middle child. He is often in the spotlight — sometimes literally.

In a school holiday program one year, he couldn’t walk into the auditorium like his classmates, but the alternative was probably what he preferred.

“They pulled the curtain out, and there’s Cooper by himself, center stage — 200 parents sitting in there — and he is grinning ear-to-ear,” Rick said.

While many young kids would be mortified, Cooper has always been most comfortable in social situations.

As for Mallory, the sign above her bed says it all: “I didn’t ask to be a princess, but if the crown fits.”

“She just loves to be pampered, and if she’s not being pampered, she’s going to let you know about it,” Shannon said.

Maria Patch, who used to babysit Hudson and was a personal care assistant for Cooper and Mallory, said this was evident in the way Mallory would have her hair done and nails painted to go to Hudson’s hockey games.

“They’re just a part of the family, and they haven’t treated them any differently because of their disability,” Patch said.

Though the two can’t talk, they communicate other ways, and their family said Cooper and Mallory understand more than people think. And they’ve certainly helped shape the person their older brother has become.

Rick said since Hudson was around adults from a young age with all the doctor visits for his siblings, he’s mature, intelligent and driven.

“Every time in an interview, my mom [says] the softest things,” Hudson said. “Like, oh, I’m a cuddler.”

Shannon has proof, though.

“I could pick Mallory up and lay her in his lap, and he would sit there and hold her and cuddle with her and think nothing of it,” she said. “He looks like a rough, tough hockey player, but he’s a pretty good guy.”

Hockey beyond the ice

“I hated it at first,” he said. “It was definitely not an instant love. I remember my first couple practices; I was just miserable.”

Still, it was important for Rick that his son learned to skate. And while Shannon was busy with Cooper and Mallory, she was glad Hudson had a hobby —  though she wasn’t quite sure it would stick.

“[A] whole hour and he went across the ice and back twice, and that was it,” she said.

Shannon said Hudson pressed on so he could hang out with his friends on the team, but it didn’t take long for the sport to cement itself into Hudson’s life.

Patch said 6-year-old Hudson asked to show her the “hockey puck in Cooper’s belly,” which was actually a pump used to distribute medicine into the spine.

Hudson’s drive eventually made him into one of the best players in his age group over the next few years.

After playing in summer programs and making the state tournament with Apple Valley High School, Hudson made a difficult choice. He opted to spend his last two high school years in Ann Arbor, Mich.,  where he competed with the U.S. National Development Team Program.

While it was a good move career-wise, Shannon said the experience was “completely miserable.”

“You don’t make that time up,” Rick said. “It was literally the worst experience we have had as a family outside of finding out that these two are severely handicapped.”

Rick said he promised his son he wouldn’t cry but said he was bawling before they dropped him off.

Hudson said leaving his family made the decision difficult, but in the end, it worked out. He committed to the Gophers during his junior year of high school and traveled across the world representing the U.S.

Minnesota head coach Don Lucia said he had penciled in Hudson as a fourth-line forward prior to this season. But Hudson exceeded those expectations in August, so Lucia moved him up.

“He understands setbacks,” Snuggerud said. “He lives it every day with his family, and he knows with setbacks, you still have to find a way to get it done.”

Cooper and Mallory enjoy watching their brother play in Mariucci Arena, though Shannon said Cooper wishes it was quieter so he could hear the pucks hitting the boards.

Both attend a special education program at Eastview High School in which they learn communication skills and make notepads and greeting cards with about a half-dozen other students.

Mary Willman, who has taught Cooper since the sixth grade, said the teachers have created a lesson for the class centered on Hudson’s hockey excursions. The humble class icon has even visited the class.

“When I speak to them about Hudson, their parents, anything with their family or especially the subject of hockey, they are elated,” she said. “And any time Hudson’s mentioned, they clearly are in tune with the conversation.”

While it’s unknown how much Cooper and Mallory comprehend, Willman said, there is one thing she’s certain they understand: Hudson is their brother, he plays hockey and he is good at it.

“That, to me is what links the whole family,” she said.

Sticks together, stays together

The Faschings have been through a lot together.

After Cooper’s diagnosis, the family frequently made three-hour commutes from their old home in Indiana to Chicago for doctor appointments before they eventually moved to Minnesota.

Hudson said it wasn’t a big deal — he would just find the hospital’s children’s room and hang out there.

“He was so patient and so unselfish with his time,” Rick said. “I don’t think I ever once heard him complain.”

Shannon admitted there was at least one time when Hudson was older that she bribed him with the promise of rides at the Mall of America to help bring Mallory and Cooper to the doctor. Hudson kept up his end of the deal. His mom, not quite.

“I rode two rides, and I was so sick,” she said. “I felt like the worst mom. I promised this, and I can’t do it. … I got him a big ice cream. I bought him everything in sight.”

While the whole family is very positive about its battle with disability, Shannon admits there are some tough parts. For example, most teenagers don’t need a babysitter when their parents have a date night, but Cooper and Mallory do.

Hudson had his own challenges, mainly not having his siblings to support him against his parents. He would sometimes lament to his former babysitter Patch, saying, “My parents won’t let me get text messaging, and if Cooper and Mallory could talk, they would totally have my back.”

But Shannon said it wasn’t all bad.

“I always know where they are,” she said. “My kids never ran away.”

Rick said he agreed he didn’t have to settle the usual sibling bickering.

“There wasn’t a lot of fighting,” he said. “I mean, what’s Hudson going to do, pick on his handicapped brother and sister? He better not.”

And in many ways, Cooper and Mallory’s disabilities have brought the clan together.

“I don’t want to say it’s better, but we’re closer,” Shannon said. “We had dinner every night together because whenever Hudson got done with hockey, that’s when we had dinner.”

As Hudson put it, he draws inspiration from Cooper and Mallory because “all the eggs are in my basket.”