Gophers in different situation for Round two with the Badgers 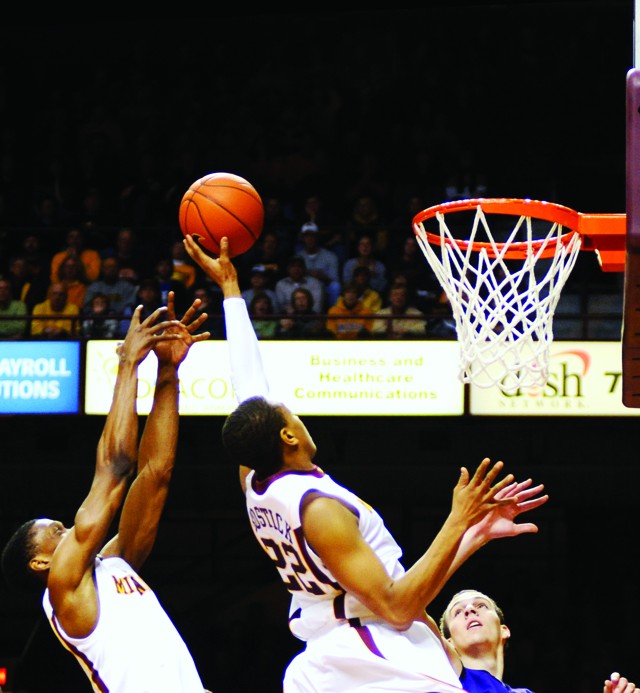 Juniors Devron Bostick (right) and Paul Carter both go up for the ball during Sunday’s 72-45 win over Northwestern.

Lawrence Westbrook had the game of his career Jan. 15 in front of a packed house in Madison, Wis. The junior carried the Gophers, finishing 10-for-16 from the floor and with a career-high 29 points. His hurried three-pointer with two seconds left tied the game, and he took charge in overtime, scoring nine of the teamâÄôs 16 points. And in hindsight, the win over Wisconsin was probably the GophersâÄô high-point of their season. Ranked No. 18 in the country, they beat Wisconsin on the road for the first time in almost 15 years, and improved to 16-1 on the season. A lot has changed in the month and a half since that win. The Badgers play at Williams Arena, at 7:30 p.m. âÄúWe were very fortunate to get a win there,âÄù Gophers coach Tubby Smith said. âÄúIt took a great, Herculean effort by Lawrence Westbrook to get it done. We felt very fortunate, obviously.âÄù Westbrook, though still the teamâÄôs leading scorer, went through a significant scoring slump for much of February, and has struggled to stay consistent. He went four straight games scoring six points or less, and after 12- and 17-point games, scored four against Illinois on Thursday. And with WestbrookâÄôs struggles, the Gophers have followed. The Wisconsin win came in dramatic fashion: They trailed by as many as 14-point in the game, and trailed by four with 37 seconds left. But they have gone 4-7 since then, including being upset by unranked Northwestern the following game. No. 18 was their highest spot in the national rankings and they dropped out over a month ago. The late-game poise has been missing, too. The Gophers blew a second-half lead to Penn State on ValentineâÄôs Day, giving up a 10-0 Nittany Lions run to end the game. They didnâÄôt score a point in the final 6:21 of ThursdayâÄôs loss to Illinois. âÄúWeâÄôre a young team, so itâÄôs like a little kid: You fall down and scrape your knees, you have to get back up again,âÄù Smith said, referring to the teamâÄôs five newcomers, three true freshmen and no senior starters. Once considered a near-lock for the NCAA tournament, the Gophers now have to win both of their remaining games to have a chance of being in before the conference tournament. And counting on a win or two in a single-elimination tournament in the Big Ten is a bad situation. Westbrook might not need another âÄúHerculeanâÄù effort against the Badgers, who have won six of their past seven games and have one of the conferenceâÄôs best defenses, as freshmen like Devoe Joseph have taken more of a scoring load. And as far as leadership, Smith said, everyone on the team would be a freshman to the NCAA tournament, where the Gophers havenâÄôt been since 2005. Only fifth-year senior Jonathan Williams was on the team then, and he missed most of the season with an injury. âÄúThey havenâÄôt been in a situation like this before either,âÄù Smith, who has been to the NCAA tournament 14 times, said. âÄúSo weâÄôve got to teach them how to handle it and coach them through it.âÄù Lineup Changes Probable Smith said Tuesday that there will âÄúprobably be a coupleâÄù lineup changes against Wisconsin. âÄúJust to get some more energy and a better start to the game,âÄù he said.