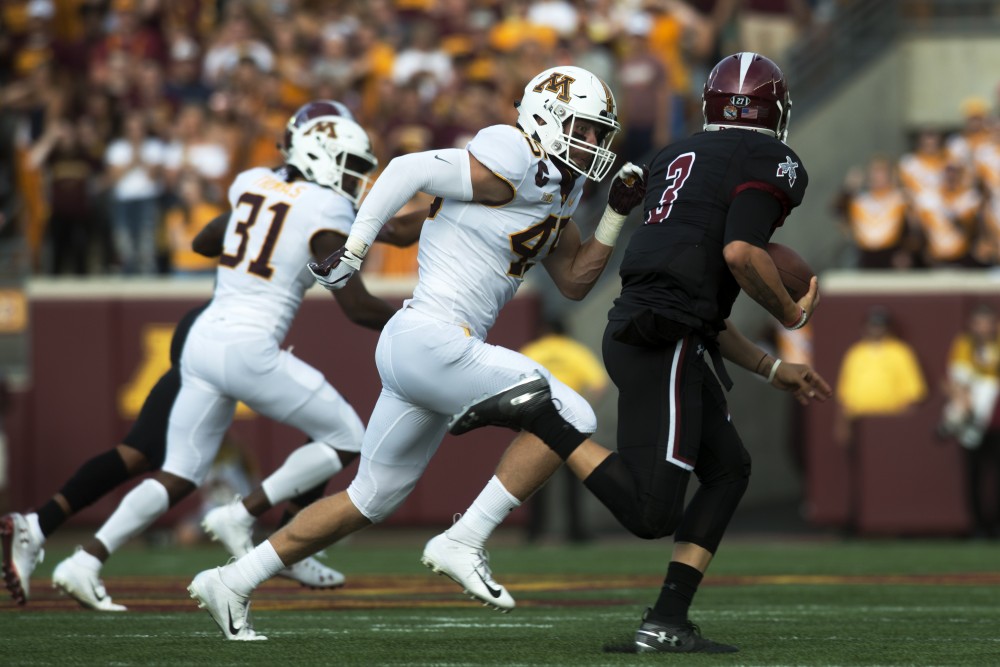 Minnesota defensive end Carter Coughlin leads the Big Ten Conference and is No. 5 in the NCAA with seven solo sacks in the first six games. He had one of his best performances of the season with a two-sack, seven-tackle game against No. 2 Ohio State last week.

“Last week, I think a big part of it was seeing the D-line kind of click from a pass-rush perspective,” Coughlin said. “Going into the next six games of the season, I’m really excited to see where that takes us.”

Coughlin is not the largest guy on the field, listed at 6 foot 4 inches and 245 pounds. The average size of a Football Bowl Subdivision offensive lineman in 2018 is 305.4 pounds. Coughlin uses his speed and quick movement off the line to get around the slower, bigger players trying to keep him from the quarterback.

He said every time he gets a sack, he was taught by pass-rush coach Marcus West to forget about it and move on.

“Going into this week I need to wipe it clean, whatever I’ve done in the past. And shoot for as many [sacks] as I can get,” Coughlin said.

Coughlin and the Gophers will head to Nebraska (0-6, 0-3 Big Ten) this Saturday where they will take on the Cornhuskers and their quarterback Adrian Martinez. Martinez, a dual-threat quarterback, has the second-most rushing yards on the team with 393 yards and three touchdowns.

“I wouldn’t say it makes me more reserved, but it does change my mentality,” Coughlin said. “So I know when I get to a certain depth, I need to make sure I counter back inside, and things like that.”

Martinez’ favorite target to throw to is J.D. Spielman, who played high school football at Eden Prairie with Coughlin and Gophers’ linebacker/leading tackler Blake Cashman. Spielman has 40 catches for 537 yards and six touchdowns through the first six games.

Coughlin and Spielman graduated together in 2016. Coughlin was the top recruit in Minnesota while Spielman was third on the list, according to 247Sports. Spielman won Mr. Football in 2015, for the best high school player in the state.

“Growing up playing against [Spielman], that was always fun so we always know what he could do, and that provides us a challenge because we always like to add stuff,” said Gophers’ linebacker Kamal Martin, who played against Spielman in high school when he was at Burnsville.

The Gophers allowed 106 rushing yards to Iowa two weeks ago and 92 to Ohio State last week. In the Maryland game, before Iowa and Ohio State, the opposite was true. Maryland ran for 315 yards and passed for 117.