Curry’s return an important addition for the Gophers

The forward is back on the court and playing well after missing over a year with injuries. 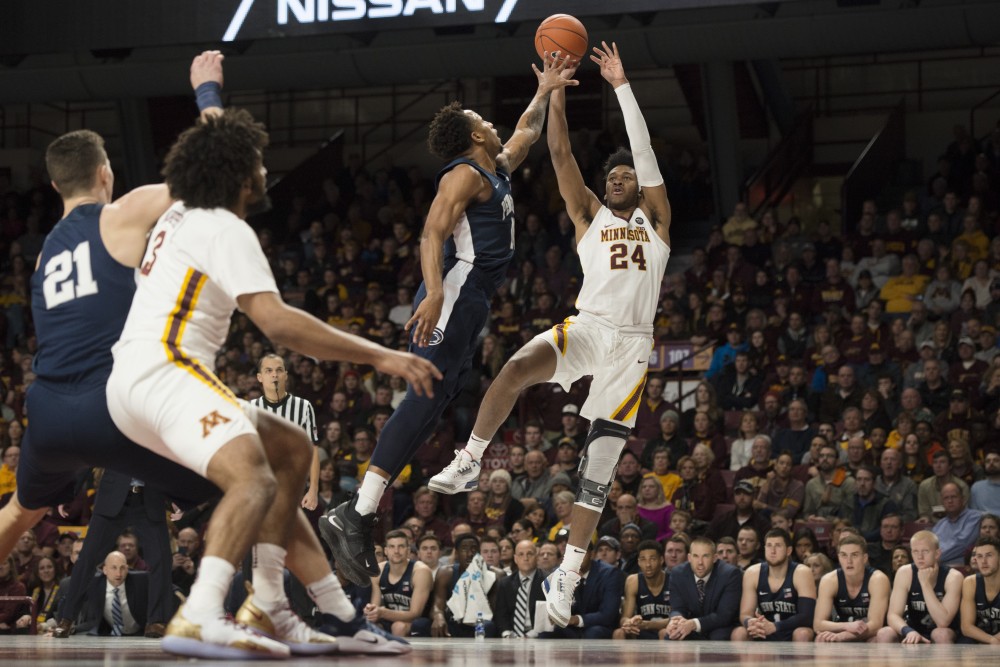 Three minutes and 45 seconds into the Gophers’ game against Mount St. Mary’s on Dec. 30, Williams Arena erupted into cheers as redshirt sophomore Eric Curry checked into the game. It was the first time in 654 days the 6 foot, 9 inch forward stepped onto the court in a competitive game.

“It was amazing. I couldn’t even sleep at night,” Curry told the media after that game, a 71-53 Gophers’ victory. “I couldn’t wait to get back on the court in front of our fans. It was amazing seeing all the fans giving me a standing ovation.”

In August 2017, Curry suffered a serious injury in his left knee, tearing his ACL, MCL and meniscus. He missed the entirety of the season, a disappointing 15-17 campaign in which the team was plagued with losses to key players.

Curry was expected to make his much-anticipated return to the lineup at the beginning of this season. Unfortunately, after playing in a preseason scrimmage against Creighton, he experienced swelling in the same knee that kept him sidelined the year prior. Soon after, the team announced that Curry would require another operation that ultimately kept him out for the first 12 games of the season.

Over the games Curry missed, Minnesota amassed a record of 10-2. The Gophers’ front court was still in good shape without him, thanks largely to All-Big Ten senior Jordan Murphy. Filling in for Curry at the five was freshman Daniel Oturu, a four-star recruit who quickly established himself as a rising star for the Gophers. Oturu’s play has steadily improved throughout the year. He currently averages 10.6 points and 7.4 rebounds per game.

“[They are] two of the great players in the conference,” Curry told the media regarding Murphy and Oturu. “It’s been amazing going against those two guys in practice and they’ve been great helping me along the way, just like I’ve helped them along the way too.”

While his minutes are still limited, Curry has been the first forward off the bench in most games since his return, adding much needed depth at forward. Entering the game to a chorus of cheers and applause on Dec. 30 was the culmination of a difficult path to recovery for Curry.

“My teammates helped me through everything,” Curry told the media. “My mom, my coaches — they kept me positive. There were times when it got really tough, and I was like, ‘I don’t know if I’m ever going to come back.’ But they just kept my head on straight.”

As a freshman in 2016-17, Curry proved effective off the bench, averaging 5.5 points and 5.2 rebounds in 19.9 minutes per game. This season, head coach Richard Pitino has been careful not to rush Curry back, knowing he’s making steady progress toward becoming the productive player he was two years ago.

“Slowly but surely,” Pitino told the media last week. “He’s not going to be ready 100 percent right away. That’s going to take some time, but I like what I’ve seen from him.”

When he is on the court, senior Dupree McBrayer said that Curry brings energy and versatility to the lineup, adding a new dimension to the Gophers’ defense.

“He talks a lot on defense, so that makes everything easier,” McBrayer told the media. “We definitely need that. We can switch a lot more things because [Curry] can cover guards. That gives so much more room to switch, so just having him out there we get different looks defensively.”

Minnesota will need all the help they can get on defense and offense on Tuesday night when they travel to Ann Arbor to play Michigan, who suffered their first defeat of the season Saturday at Wisconsin.