The Gophers will compete in the Big Ten championships this weekend. 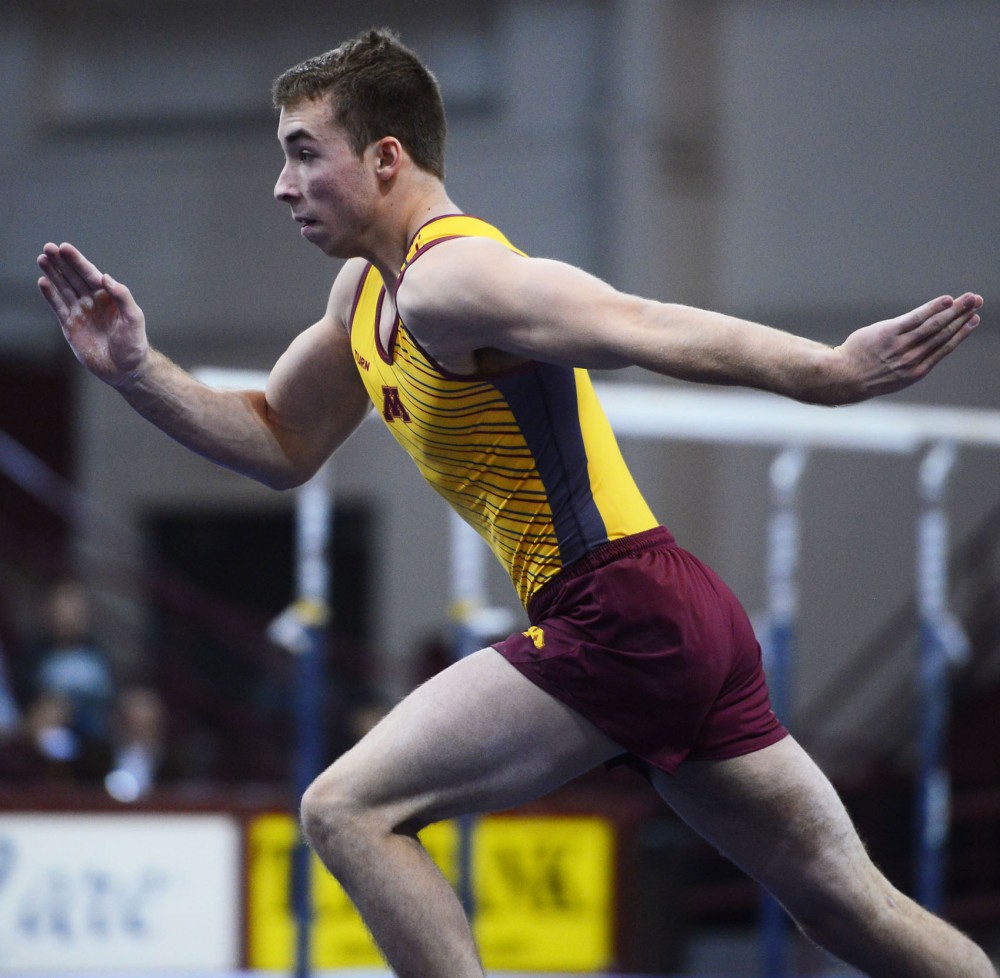 Freshman Joel Gagnon runs swiftly during his floor routine at the Sports Pavilion on Jan. 24 against the Air Force.

Freshmen in any sport aren’t expected to be stars right away. Often they just grow and gain experience for the years after.

But the Gophers buck this trend, as they have freshmen regularly filling the lineup for each meet.

“At first, you have some doubts, but as we’ve gone through the season and seen them grow — especially in these last three meets — you are able to trust [the freshmen],” junior Paul Montague said.

Minnesota has 10 true freshmen out of the 19 gymnasts on the team, and first-years Yaroslav Pochinka, Alex Wittenberg, Joel Gagnon and Tristan Duran have been staples throughout the season.

“Because we make up such a large portion, we have that much more influence,” Gagnon said. “Especially at the meets, we are heavily depended on, and it brings a lot of responsibility.”

The freshmen-heavy team this year is dramatically different from last year’s senior-heavy team, and the differing attitudes are noticeable.

“The freshmen are really excited and hungry. They get going; it’s their first Big Ten [championship], and they’re ready to capture that moment,” Montague said. “We can all feel their energy, and that builds us up, too.”

In the last two meets, the freshmen have had noticeable impacts. On senior night, Gagnon scored a 15 on the floor and a 14.7 on the vault; Duran recorded a 14.75 on parallel bars; and Pochinka tallied a career-high 15.35 on vault in his second meet of the season.

Last weekend when Minnesota upset No. 2 Penn State, Wittenberg posted a 14.85 on the floor, Duran tallied a 14.5 on the parallel bars and Pochinka again posted a team-high 15.1 on the vault.

“These guys have stepped up really well, and they are a talented bunch,” head coach Mike Burns said. “To have that many of them and to know we got them for three more years after this is pretty comforting.”

The upset against one of the top teams in the nation was a huge boost for the team, especially before heading into the Big Ten championships.

“It was exciting. It gave us more confidence to go into Big Tens saying ‘We’re here, we can compete,’” Montague said. “Given that we are young, it doesn’t mean anything. We are here to compete.”

The star of the freshmen class lately has been Pochinka, whom the Big Ten named Freshman of the Week last week.

“Those are great little cherries on top of the sundae to get recognized for doing something special for the team,” Burns said. “It’s nice to have that recognition.”

Minnesota will compete against many of the same teams it faced in its first meet, the Windy City Invite, in which it performed poorly. The team, with its now-experienced freshmen, will look to get some revenge in the Big Ten championship.

“Last time we faced most of the Big Ten teams, we as a team, especially freshmen, were nervous and not really confident,” Gagnon said. “So I think that will be the big difference this time. We know we can do it, and we’re going to go out and do it.”