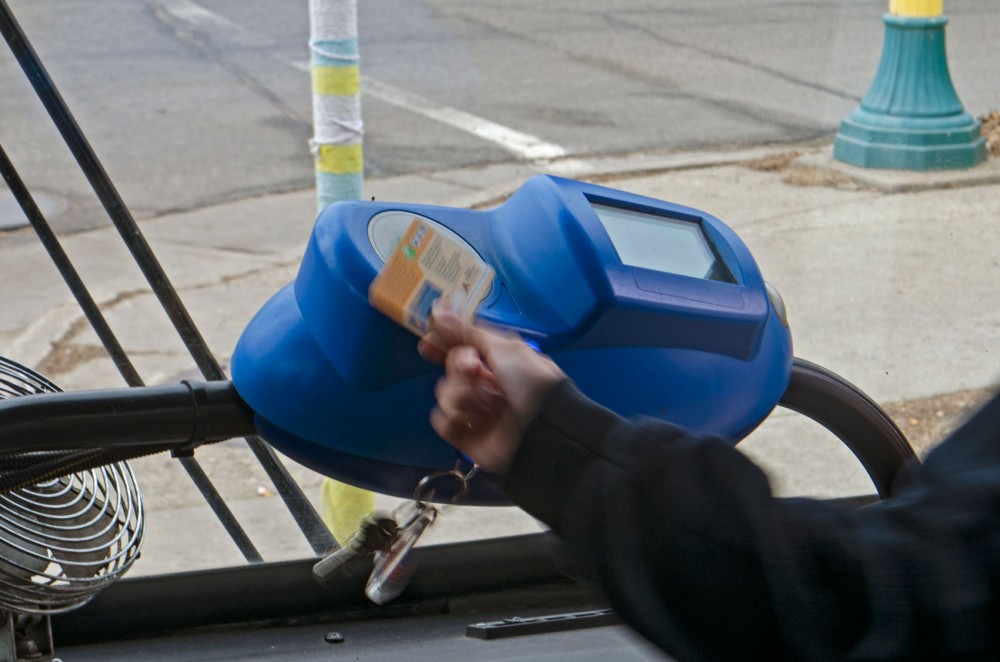 A student touches their U-pass to a Go-To card reader on the front of the 3 bus on its way to the University campus Tuesday. Since 2015, student pass ridership has increased by 12.5 percent to about 4 million total rides.

Kristina Busch
A program offering Minneapolis Public School students Go-To passes has improved students’ academic and social well-being, according to a recent University of Minnesota study.
In 2013, six Minneapolis public high schools participated in Metro Transit’s student Go-To Card program, which gave students free or discounted passes for unlimited rides for that school year.
The following year, the University’s Center for Transportation Studies  analyzed how these passes impacted students and Metro Transit, releasing its findings in last month’s edition of CTS Catalyst.
The study found that the program increased ridership the most for black, foreign-born or single-parent families.
Students with passes were 23 percent less likely to be absent from school than other students, according to the study.
With a pass, students had higher GPAs and more access to work opportunities, said Kirti Das, a research fellow at the Humphrey School of Public Affairs.
“Students in those lower-income families tended to have greater challenges compared to middle-class families,” the study’s principal investigator and Humphrey School associate professor, Yingling Fan, said. “The parents typically have double-shift jobs, so … their access to mobility freedom is very different.”
Before the program, students without any form of bus pass said in a focus group that they felt socially excluded because of their lack of mobility, Fan said.
“The [lack of] mobility limits the student’s ability to engage in socializing with friends, going to libraries, going to sports events and more,” Fan said.
By 2014, all Minneapolis public high schools offered the program. In March 2014, Metro Transit increased its service frequency on regular routes — adding 103 bus trips — to accommodate the student ridership, the study said.
Since 2014, Student Go-To Pass ridership has increased by 12.5 percent, with almost 4 million total rides in 2015, the study said.
Because Metro Transit has hybrid buses, they are much more fuel-efficient compared to older buses, Das said.
In a survey, about 81 percent of students with passes said they were “satisfied” or “very satisfied” while riding the buses, he said.
Still, some female students said they felt unsafe at bus stops, Das said, adding that the concern in the survey may stem from a lack of information about bus safety.
In response to the students’ safety concerns, Das said Metro Transit and Minneapolis Public Schools are discussing meeting with female students and increasing police presence in populated areas.
The study found that because fewer students use traditional yellow school buses, Minneapolis Public Schools decreased its carbon dioxide emissions by about 59 percent.
Based on the results of the program in Minneapolis, Das said, Metro Transit may expand it to St. Paul Public Schools.
Still, because St. Paul doesn’t have as many bus routes or stops as Minneapolis, it may cost more for the city to implement the program, Das said.
Delete Image
Align Left
Align Center
Align Right
Align Left
Align Center
Delete Heading