Minnesota back to Big Ten play against Purdue

Purdue has consistently been at the top of the Big Ten this season and is undefeated at home. 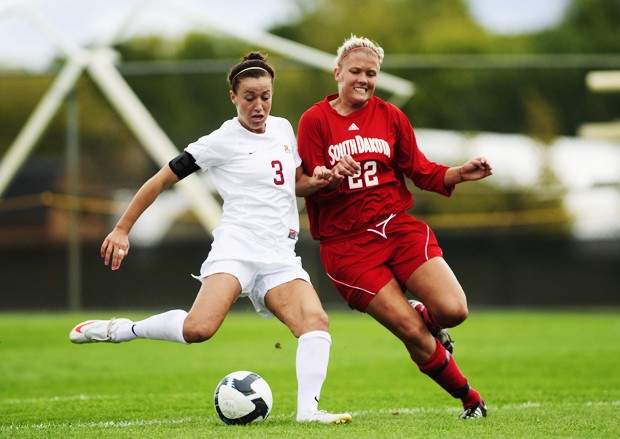 Minnesota enjoyed a lopsided 9-0 victory in non-conference play last Sunday, but can hardly expect a similar margin for the rest of the season as the team gets back into Big Ten play. The Gophers (9-2-2 overall, 2-0-1 Big Ten) travel for a Sunday matchup with No. 9 Purdue âÄî a team that lost two tough 1-0 games to Minnesota last season, including one double overtime contest. âÄúPurdueâÄôs obviously No. 1 in the Big Ten,âÄù head coach Mikki Denney Wright said. âÄú[They] have a great attacking flare sending a lot of numbers forward and a different formation we havenâÄôt seen this year.âÄù The BoilermakersâÄô (7-2-3, 2-0-2) attack is made up of a deep offense that boasts four dangerous goal scorers who will look to disrupt MinnesotaâÄôs 11-player defense. Senior forward Jessica Okoroafo leads Purdue with six goals while senior defender Sylvia Forbes follows close behind with five. Senior defender Katie Seeger and sophomore forward Katie Leinert finish off the quartet, each with four goals. PurdueâÄôs depth will force the Gophers to defend early enough to prevent shots on goal, Gophers junior defender Kylie Kallman said. At net, Minnesota redshirt freshman goalkeeper Cat Parkhill has six shutouts and 32 saves, and has given up nine goals this season. Purdue senior goalkeeper Jenny Bradfisch has 37 saves but falls towards the bottom half of the Big Ten with just three shutouts and 11 goals against. Offensively, Minnesota will be relying on its top goal scorer, junior forward Katie Bethke, who has tallied 11 goals this season. The next highest amount of goals from amongst the Gophers this season is three. âÄúA win is essential this weekend, and weâÄôre not underestimating them at all,âÄù Kallman said. âÄúTheyâÄôve beaten great teams in non-conference games, and theyâÄôre undefeated still in the Big Ten.âÄù While the Boilermakers did play high-ranked opponents this season, including then-No. 6 Texas A&M and then-No. 3 Stanford , they fell short against teams over which Minnesota has prevailed. Purdue settled for ties against Wisconsin-Milwaukee and Wisconsin , both of which the Gophers defeated on the road this season. A trip to West Lafayette looks to be more difficult for Minnesota, however, as the Gophers havenâÄôt won at Purdue since 2000 , and the Boilermakers have continued to make the most of their home games this season. âÄúThey havenâÄôt lost on their home field yet, so weâÄôre going to be the team to do that âÄî beat them there,âÄù freshman midfielder Allie Phillips said. The Gophers can try to make up for PurdueâÄôs home-field advantage with more rest this week with no matchup prior to SundayâÄôs game. The Boilermakers will have to recover from a Big Ten matchup against Indiana (9-3-1, 1-2-1) on Thursday before hosting Minnesota. The Gophers have a 5-7-0 overall record against Purdue, and though statistics might favor the Boilermakers, Kallman said thatâÄôs what they prefer. âÄúWe still feel like weâÄôre the underdogs the rest of the year because everyone ranked us to finish what, sixth in the Big Ten?âÄù Kallman said. âÄúSo we still feel like weâÄôre underdogs going into every game, and we like it that way.âÄù