Independence Party candidate Ron Lischeid first took on Kahn in 2004, garnering about 6 percent of votes. In 2008, Lischeid received about 8 percent. 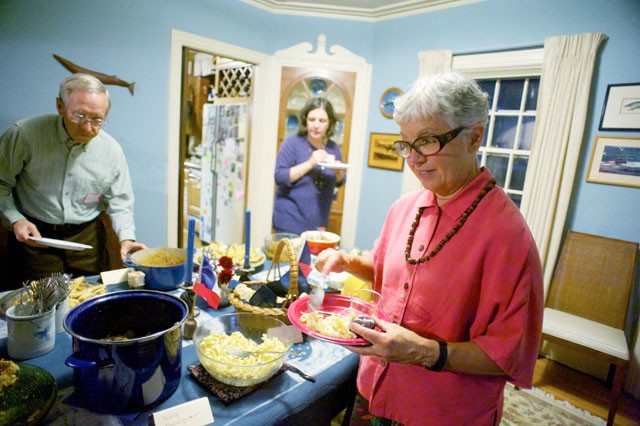 State representative Phyllis Kahn of district 59b puts together a plate of French food during a fundraiser for her campaign Friday evening at a supporter’s house.

Standing in front of about 40 supporters at a campaign fundraiser in a home on East River Road, Rep. Phyllis Kahn prepared to host an impromptu Q&A session about Minnesota politics.

“How are we going to call people to order?” Kahn asked as guests milled around, digging into the fundraiserâÄôs main draw: home-cooked French
cuisine.

“Well, we can yell and shout and whistle,” Chuck Jorgenson, one of the eventâÄôs hosts, replied. Jorgenson whistled weakly, and Kahn yelled for quiet. Eventually the soft murmur of conversation dropped off.

Question topics ranged from the stateâÄôs redistricting process to KahnâÄôs thoughts on the competitiveness of certain congressional races.

In a room to her right, friends listened as they dug into the mountains of beef bourguignon, crepes and ratatouille heaped on the hostâÄôs dining room table.

The event is a tradition of KahnâÄôs dating to the early 1970s.

During that time, “Politics was eating with your friends every weekend,” Marcia Greenfield, who has helped in many of KahnâÄôs fundraisers, said.

Voters in district 59B, which encompasses the University of Minnesota and its surrounding neighborhoods, have elected Kahn to the House 19 times, beginning in 1972. SheâÄôs received between 58 percent and 94 percent of votes in the last five elections.

“If youâÄôre running against an incumbent whoâÄôs as well known and respected as Phyllis Kahn, thatâÄôs going to be almost a suicide match,” political science professor Larry Jacobs said. “The odds are just against you.”

But that hasnâÄôt stopped repeat competitors.

Independence Party candidate Ron Lischeid first took on Kahn in 2004, garnering about 6 percent of votes. In 2008, Lischeid received about 8 percent.

He criticized Kahn for the level of “customer service” she provides to her constituents.

“In particular, in this district, many of the people that I talk to âÄ¦ ask me, âÄòWhere is Rep. Kahn?âÄô” Lischeid said. “They ask that in the same way that somebody would ask the question, âÄòWhereâÄôs Waldo?âÄô “

If elected, Lischeid said he would be visible and available to constituents and would only serve for 10 years. HeâÄôd also focus on the Central Corridor Light Rail Transit lineâÄôs impact on the district, which he said Kahn has failed to do.

But Jacobs said Kahn isnâÄôt a legislator who simply disappears into the Capitol.

“The reason you donâÄôt see me in the headlines all the time is that IâÄôm working on things that nobody else works on,” Kahn said at the fundraiser.

Throughout her legislative career, Kahn has proposed bills to reform state government, lower the drinking and voting age and co-sponsored legislation to legalize medical marijuana.

“SheâÄôs someone whoâÄôs not shy about speaking her mind and some people take offense at that, but if youâÄôre going to be in the Legislature, youâÄôve got to have thick skin,” Jacobs said. “SheâÄôs formidable in the Legislature.”

The other candidates, all University graduates, still want a shot.

Dan Craigie, a Green Party candidate who graduated from the University in 2009 said Kahn isnâÄôt representing the districtâÄôs diverse constituency well. Being a recent student, Craigie said he understands concerns about debt and the cost of higher education.

Lischeid, who began school in 1966 and graduated in 1988, agreed that a young person should represent the district.

Republican candidate Ole Hovde, who did not return calls for comment, graduated in 2009. He ran against Kahn last election, receiving about 25 percent of votes.

After meeting with Hovde earlier in the campaign, Craigie said the Republican candidate also understands the high cost associated with attending the University.

But Hovde hasnâÄôt been very active this season, said Craigie, whoâÄôs knocked on about 6,000 doors.

“No one is a shoo-in,” Kahn said. “But you have to see a more active campaign from either of them to get worried.”

“The only way that this district is going to be represented by somebody else is weâÄôre going to wake up one morning and thereâÄôs going to be an obituary for Phyllis Kahn that sheâÄôs finally passed away and she canâÄôt run again.”