The Gophers play No. 25 Northwestern in Evanston, Illinois this week. 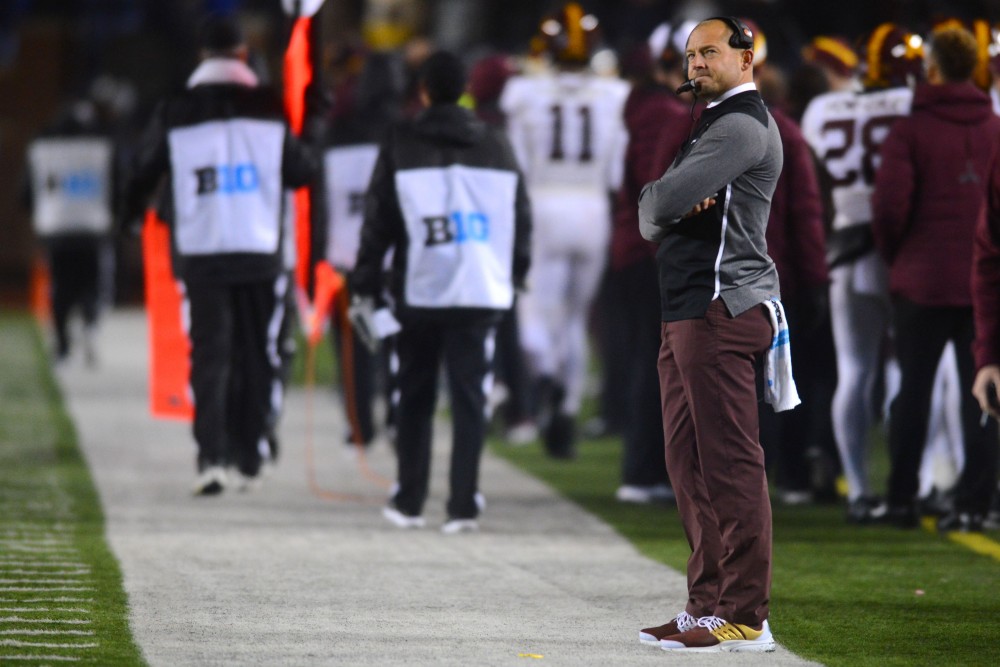 Coach P.J. Fleck watches the big screen as a Michigan touchdown is confirmed on Saturday, Nov. 4, 2017 in Ann Arbor, Mich. The Gophers lost to the Wolverines 33-10.

“You can see what kind of powerful leader [Fitzgerald] is, not only just for Northwestern but for our game,” Fleck said. “He’s involved in all types of committees for the [American Football Coaches Association], he does a lot in philanthropy, raises a lot of money for Northwestern. I mean he’s just, he’s dynamic and he’s done a great job.”

Fitzgerald is in his 12th season as Northwestern’s head coach, taking over for Randy Walker in the 2006 season after Walker died of a sudden heart attack.

Fleck said when he was at Northern Illinois starting out his coaching career as a wide receivers’ coach with the Huskies, he had lunch with Fitzgerald to talk about being a head coach. Fitzgerald gave Fleck some of the best coaching advice he said he’s heard.

Fleck will take on his early coaching mentor this Saturday when the 5-5 Gophers head to Evanston, Illinois to take on Fitzpatrick’s No. 25 Wildcats at Ryan Field. Northwestern is on a hot streak, winning its past five games and is now ranked second in the Big Ten West.

Fitzpatrick’s team knows how to finish games, as three of those five wins have come in overtime.

-Last season, Minnesota defeated Northwestern. Steven Richardson, a Chicago native who did not get a scholarship offer from Northwestern, tweeted after the game: “Hey @Northwestern am I still too short to play Big Ten football?”

-Quarterback Demry Croft is listed as the only starter for the game against Northwestern. The depth chart heading into the Nebraska game listed Demry Croft or Conor Rhoda as the starting quarterback.

-Jacob Huff is now listed as one of the two starting safeties.