From the soccer field to the diamond

Josie Solie and Alex Pafko both played soccer for four years in college and are now role players with the softball team. 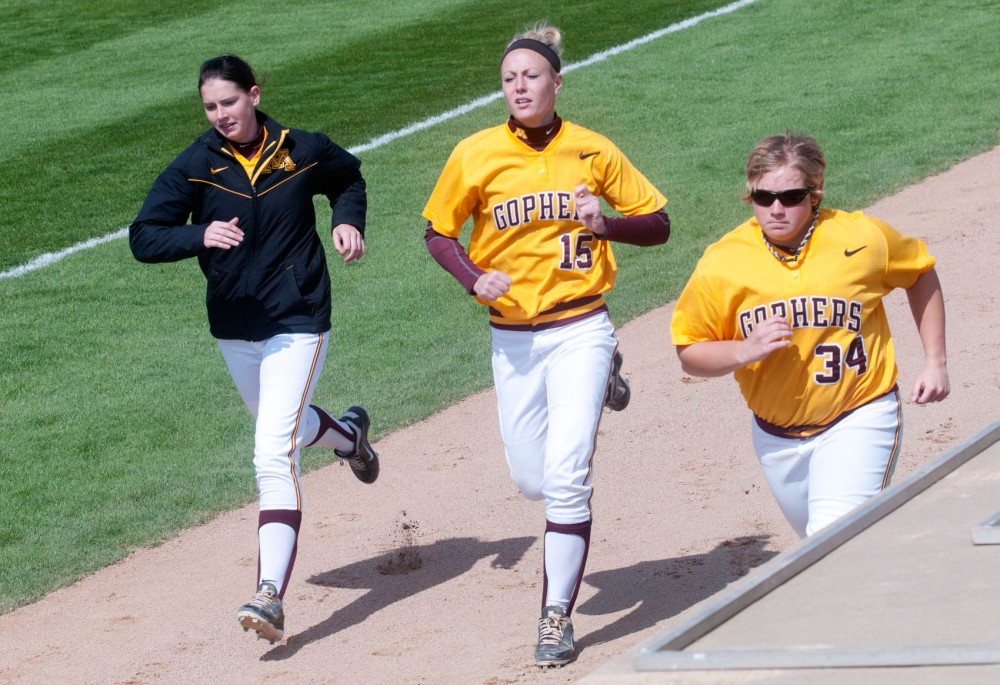 Gophers softball utility players Josie Solie, Alex Pafko and Sara DuPaul, from left to right, run alongside the field during a Sunday afternoon game against Nebraska. Solie and Pafko, both Gophers soccer players, are now pinch runners for the Gophers softball team.

Alex Pafko and Josie Solie are softball players without bats — or even gloves.

After spending three years at St. Cloud State playing soccer, Pafko transferred to Minnesota, where she continued her soccer career last fall. Solie, her soccer teammate, has played for the Gophers for the past four years.

Although they are done with their collegiate soccer careers, the two are teammates again — this time on the softball team, where they are used in pinch-running roles.

A unique set of circumstances led them to the new sport.

Plagued by injuries, the softball team was “down a couple bodies and needed some people to help out,” head coach Jessica Allister said.

Assistant soccer coach Jerrod Roh heard that and said his team might have some seniors willing to join, Allister said.

If either were eligible to play soccer next season, the switch to softball may not have happened.

“I mean, I think it’d be impossible if they weren’t seniors because they would be practicing soccer three hours a day,” head soccer coach Mikki Denney Wright said.

Pafko said she saw an email from Roh, which explained that the softball team was low on players and asked if they were interested in trying out right away.

She then texted Solie.

“When she texted me, I [hadn’t] even seen the email yet. She was like ‘Let’s play softball,’” Solie said.

They both jumped at the chance to be part of a team again.

“It’s hard to say goodbye to soccer, and I still try to help out when I can, but it doesn’t compare to actually be on a team and hanging out with girls,” Solie said.

Both players have prior experience with the sport — summer co-ed ball — and Solie also played a year of fastpitch in middle school.

Regardless, neither player’s level was anywhere near the intensity of Division I softball.

The two have embraced their job on the softball team as pinch runners, but they had to go back and master the rules first.

“You just start going over the rules and making sure they understand everything,” Allister said. “Then you just throw them into practice, and you learn as you go. They do it wrong a lot, but eventually they’re going to do it right, so it’s about throwing them into the fire, and they figure it out.”

There is a learning curve, but Allister said she thought various reads on the soccer field — like deciding if you can beat a defender to a ball or not — might help the two with reading balls hit to the outfield.

Pafko said she still struggles with reading some situations and that she’s gotten caught off base a few times during practice.

“You maybe think they’re not going to catch it, and they make some diving catch,” she said.

For her part, Solie said that reading balls in the dirt and knowing when to run has been an adjustment. She also said they don’t yet have the “natural instincts” of their teammates.

Allister said outfielder Dannie Skrove, who was injured at the beginning of the season, “played a huge role in helping them out.”

Their practice consists mainly of situational base running, and Allister said that they worked on sliding a lot in the winter.

Despite the steep learning curve, they’ve had the support of their new teammates.

“The first day of practice I remember they were cheering us on … Like even when we were doing bad, they would still cheer us on. It helped us a lot, I think,” Pafko said.

They also still have the support of their former teammates on the soccer field.

Denney Wright said that the soccer team plans to attend a softball game in the future.

“I’m sure they’ll be very loud supporters,” she said.

Solie has appeared in 28 games exclusively as a pinch runner and has scored nine runs with a perfect 4-for-4 in stolen bases.

Pafko has played in 10 games and has scored five runs and is 2-for-2 in stolen base attempts.

The two have joked about playing the outfield when they shag balls during practice.

“Running in the outfield, catching balls, diving looks like so much fun,” Pafko said.

Solie added: “I think I might be terrified at bat, though. The ball comes so fast.”