Faithful try to save their church

A financial dispute could leave a Dinkytown congregation without a chapel. 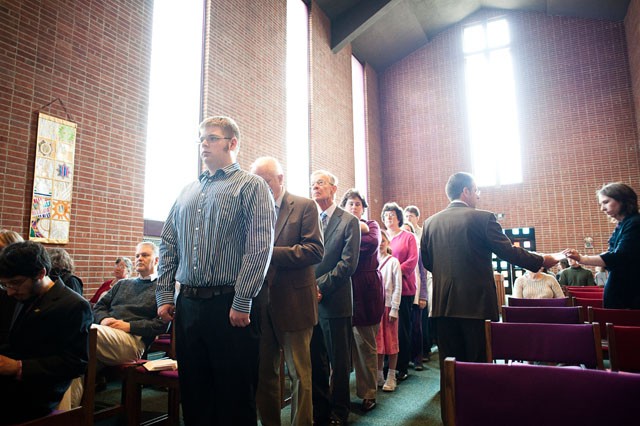 Congregation members cue up for communion during Sunday service at University Lutheran Chapel in Dinkeytown. The Minnesota South District of the Lutheran Church Missouri Synod, which owns the deed to the building, has proposed selling the property.

Members of University Lutheran Chapel in Dinkytown face the possibility of losing their church pending a May 17 vote by the board of directors of the synod that owns the property.
The Minnesota South District of the Lutheran Church Missouri Synod, which owns the deed to the building, has proposed selling the property, which sits across from Sanford and Roy Wilkins Halls on University Avenue Southeast.
The South District wants to sell the building because of financial issues, Pastor David Kind of University Lutheran Chapel said.
âÄúIf we disappear, our students wonâÄôt have anywhere to go,âÄù Kind said. He said about 100 students regularly visit the University Lutheran Chapel, making up nearly half of the congregationâÄôs 219 members.
The profits from the sale would also go toward starting new campus ministries across Minnesota, he said.
If the property were sold, the South District would begin handing out $5,000 a year to between 12 and 15 emerging campus ministries around the state.
The chapel, which has been used since 1950, has a campus ministry that is almost âÄútotally self-sufficient,âÄù Kind said. The congregation pays the South District $41,000 for rent annually. The South District pays $12,000 for building upkeep and utilities, Kind said.
The University Lutheran Chapel congregation was told about the proposed sale April 19 during Holy Week. Since then, members of the church have been attempting to stop the sale by sending letters to directors and creating a Facebook page about the proposal.
The South District started a committee to sell the building in September 2010, Kind said.
When asked about the proposed sale, Rev. Mark Noren of the South District said it would be âÄúinappropriateâÄù to respond to inquiries since the board of directors has not voted yet.
âÄúWhat weâÄôre trying to do as students is unite,âÄù University of Minnesota sophomore Kurt Weber said. Students who go to the church have been calling alumni and friends to help send letters to directors, he said.
âÄúI think itâÄôs very important to have a stable church body for students to go to,âÄù said University graduate student Mattias Gassman, who has gone to the church for three years.
âÄúIt really disappoints me that people would consider closing down our church,âÄù said 25-year-old St. Paul resident Amy Bjornson. As she discussed the sale of the chapel, BjornsonâÄôs eyes filled with tears. She said she would follow the pastor and hope that everyone stays together.
Matt Olson, 51, of Northeast Minneapolis, said he talked to the pastor about declaring the church as a historical site so it could not be changed.
The church is trying to raise funds to possibly buy the property, Kind said, otherwise the campus ministry will have to search for a new meeting location.
âÄúI just think this would be a huge loss to the University of Minnesota community,âÄù he said.