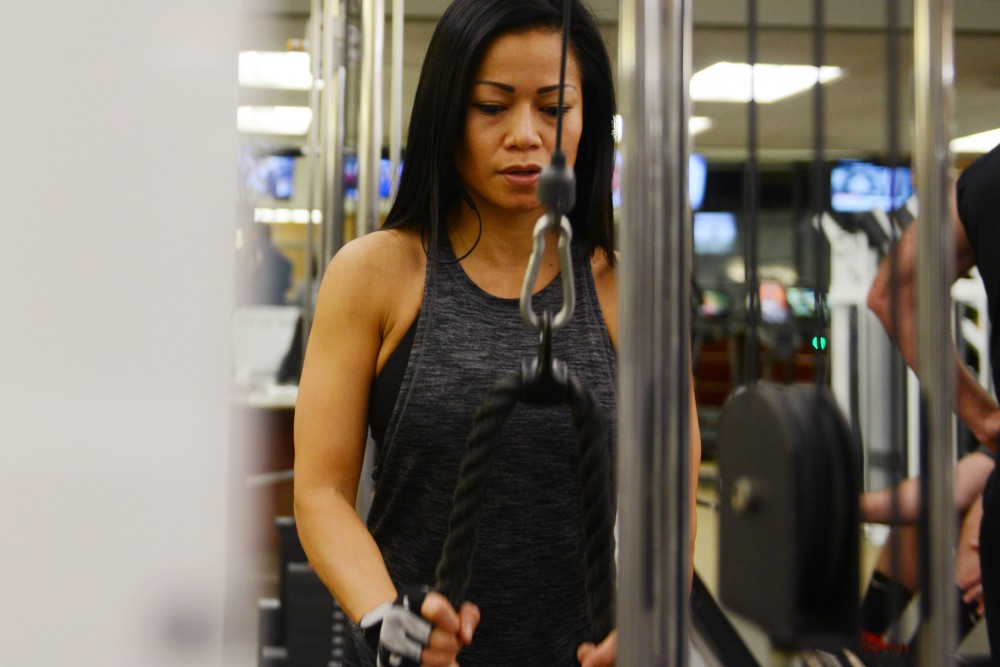 Cookie Francisco works out at Life Time Athletic on Tuesday in Eden Prairie. Francisco is the 2016 Minnesota State and North Star Masters Bikini Overall Champion. She dedicated 5 months to get ready for the show in June, saying “prepping is all about discipline.”

To onlookers outside the world of fitness and bodybuilding, the culture can seem like a cult. To those within, fitness is simply one of life’s priorities.

On Oct. 8, 39-year-oldCookie Francisco cemented her second Class B Bikini Masters Championship in the NPC North Star Competition. This makes her two for two in competition championships.

“I never thought of competing until me and my friend were eating fries at a LifeCafé. She said, ‘Why don’t we compete in a bikini competition? We could do that,’” Francisco said.

Though the decision came lightly during a mealtime conversation, the preparation was hard work and meals were few.

When prepping for competitions, Francisco works out five times a week for two hours at a time. She said she follows a strict meal plan. Each day she eats five meals that are weighed and measured with precision — usually consisting of three ounces of lean meat and a cup of veggies.

Such a sparse diet calls for unconventional culinary habits. “I put the peanut butter on the fish,” Francisco said, explaining how she gets her necessary fats.

“I’m not naturally toned … I’m like a skinny-fat. It’s tough because I do love to eat — I’m Filipino.”

With the recent rebellion against impractical body standards in the advertising industry, Francisco’s hobby may seem like it’s betraying female solidarity. Francisco, however, thinks it’s empowering.

“The discipline has changed every aspect of my life. Some people will say stuff to discourage me, but I just want to prove to myself I can do it. I’m in charge of the outcome.”

Though the competitions terrify her, Francisco says the fear is worth it. “I actually love every bit of competing. It’s out of my comfort zone, but it makes me better,” she said.

The change is apparent to Francisco, both mentally and physically. She admits to feeling lethargic if she misses a workout — even in the offseason. She credits much of her discipline to her trainer, Adam Bisek of Vault Fitness.

“He’s great, I would recommend him to anyone who wants to get in shape,” Francisco said.

Besides designing a meal plan and workout regimen, Bisek is in charge of assessing Francisco’s body in order to prepare her for judging.

“Every Sunday [I] send a relaxed picture of [my] front and back to him,” Francisco said. Bisek then makes minor tweaks to her fitness plan.

With her newfound insight into the world of fitness, Francisco has some ideas about how the industry needs to change.

“I do believe that everyone should go to the gym … if only the gyms were more approachable. If fitness businesses could just talk to every customer and ask what their goals are and give them meal suggestions, everyone would be healthier,” Francisco said.

Despite describing training as “a second job,” Francisco isn’t all work and no play. Her workouts give her plenty of time to bump some music. Her tunes of choice? Chainsmokers and Ed Sheeran, of course.