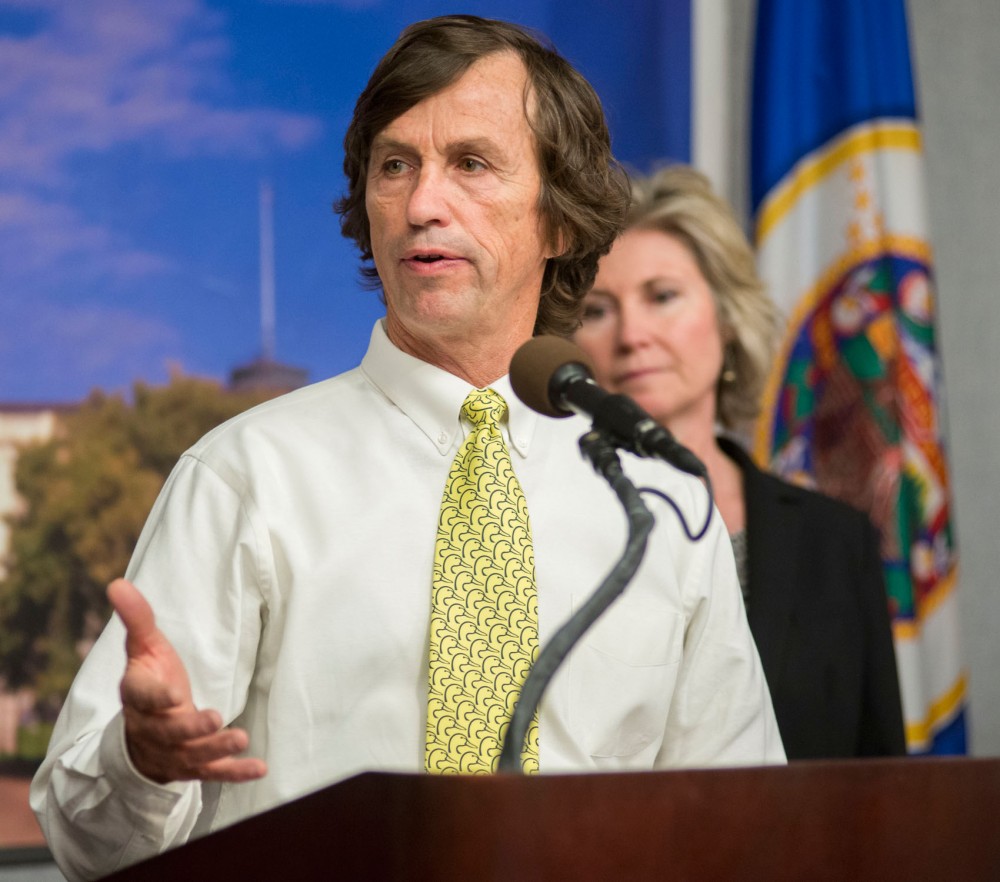 Rep. Denny McNamara responds to questions about the bill to recognize same-sex civil unions as an alternative to same-sex marriage on Wednesday, April 3, 2013, at the State Capitol.

Republican legislators unveiled a proposal Wednesday to legalize civil unions, an action that would allow same-sex couples the benefits of marriage but not the title.

Kelly’s bill, which drew fierce criticism from same-sex marriage proponents, comes at a time when Democratic-Farmer-Labor Party members, along with a few Republican supporters, are trying to give same-sex couples the right to marry in Minnesota.

Kelly, who formally served on the board for Minnesotans United for All Families — the main force pushing for legalizing same-sex marriage — said it’s not the government’s role to redefine marriage.

“After seeing the last two years, the battle we fought and the amount of money that we spent, and it all revolved around one word,” he said, “and that’s marriage.”

Kelly’s proposal, although late in the session, is being introduced as a milder approach to addressing Minnesota’s same-sex marriage conversation.

“Now we put all our eggs into one basket proposing a gay marriage bill,” Kelly said. “If that fails, there is no fallback plan.”

Sponsors of the civil union bill said at a press conference Wednesday that they don’t support the House’s same-sex marriage proposal authored by Rep. Karen Clark, DFL-Minneapolis, but that they believe civil unions are a better option and would provide same-sex couples the rights they’re seeking.

While many DFLers were angered by the proposal, Rep. Kim Norton, DFL-Rochester, signed onto the bill, and Kelly said he expects many more legislators to follow her lead.

“It does have support from both sides of the aisle, and I am proud of that,” he said.

House Speaker Paul Thissen, DFL-Minneapolis, said he will not support the civil union legislation because he believes in “marriage equality.”

“Unfortunately, the bill announced today is an idea whose time has passed and would simply create a new separate and unequal category for same-sex couples in our state,” he said in a press release.

Jeremy Reichenberger, who chairs the College Democrats at the University of Minnesota and is gay, said the proposal is a distraction from what the majority of Minnesotans want: “the freedom to marry.”

“Your wedding day is probably one of the happiest days of somebody’s life, and I think it’s really hurtful and really disrespectful to try to give gay couples something that is inherently not the same as everybody else,” Reichenberger said.

A Star Tribune poll found in mid-March that 53 percent of Minnesotans believe the state’s marriage laws should stay the same.

Sen. Scott Dibble, DFL-Minneapolis, who is heading the same-sex marriage bill in the Senate, said the inclusion of civil unions in the state’s law is discriminatory.

Civil unions are “inferior; they’re unequal,” he said. “A number of states have tried them, and they’re now getting rid of them because they find that they encourage disparate, non-equal treatment of families and those families’ children.”

Four of the states that permit civil unions also have a constitutional ban on same-sex marriage.

Minnesotans United spokesman Jake Loesch said the legislation to establish civil unions in the state isn’t “a compromise or an acceptable” alternative for same-sex couples.

“Classifying same-sex couples and their families as second class in the state of Minnesota by deeming them only worthy of civil unions just isn’t acceptable,” he said.

“We’re happy to see that people are discussing other options besides completely redefining what our state’s marriage law is,” she said. “But we need to review the language of the bill first,” before voicing an opinion.

There are constitutional and religious concerns with civil unions that would need to be addressed, she said.

Kelly rejected the notion his proposal was discriminatory as he said it would provide identical benefits under the state to same-sex couples.

He said the bill is a “baby step” toward taking the “divisive social issues away from the political arena” and giving people equal rights.

Kelly’s late proposal comes as a surprise to some legislators.

At the conference, he said he assumed another legislator would have already proposed a similar bill considering the DFL control of the Legislature.

“I’m a little surprised because I thought actually the Democrats would have done this,” he said. “I thought civil unions would have been proposed by this time.”

Kelly said his bill isn’t competing against Clark and Dibble’s bill to legalize same-sex marriage but instead offers “an alternative to give rights and freedoms.”

“We’re in a really strong position,” he said.

Kelly is requesting that his proposal be heard in the House Civil Law Committee chaired by Rep. John Lesch, DFL-St. Paul, although the deadline for bills to move forward in the Legislature has already passed.

He said there have been exceptions by the rules committee in the past to allow bills to come in after the deadline.

—Alma Pronove contributed to this report