Current and future Gophers on display in Pulley League

Almost the entire Gophers men's basketball team, along with Royce White, is competing in the Howard Pulley Pro Summer League this year. 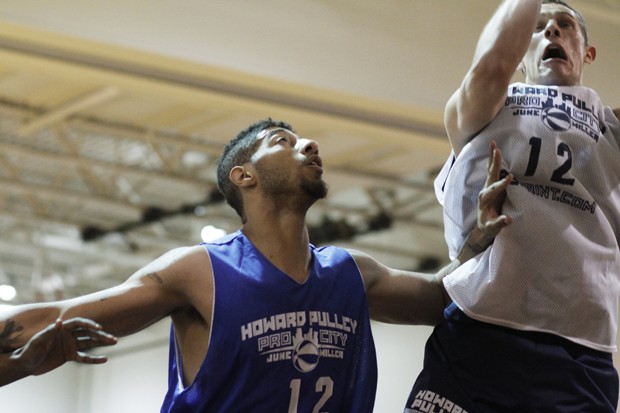 Related: 2010 Pulley Rosters | Schedule Gophers fans are getting a look at what next season holds at the Howard Pulley Pro City Summer League , but they are also getting a glimpse of what could have been. Incoming Minnesota menâÄôs basketball recruits and current Gophers have been on display at the summer league in St. Paul since last week. League CEO and executive director Rene Pulley said the league is NCAA-sanctioned and gives the Gophers players a chance to compete against collegiate talent while they are unable to practice formally with the team. In fact, every Gophers player besides junior Ralph Sampson III is taking part in the league, including junior transfer Trevor Mbakwe , whose status with the team is up in the air due to his pending court trial. Junior Devoe Joseph as well as freshmen Maurice Walker and Oto Osenicks are all on rosters, but have yet to make an appearance in the league. Former recruit Royce White is also playing in the league, facing his former teammates. White, the highly-touted recruit who never played a game for the Gophers and left the University of Minnesota in February after legal troubles, has been participating in the summer league while rumors have been swirling he is being recruited by Kentucky. He recently told the Pioneer Press that his chances of returning to the Gophers are âÄúslim and none .âÄù White visited Iowa State last Wednesday, and said that he has been talking to Baylor and Kentucky about playing there in the future. âÄúAll three of them are still in the mix,âÄù White said last Tuesday. âÄúI donâÄôt know which one IâÄôm going to go with.âÄù Accompanying White on the trip was his coach at Hopkins High School, Ken Novak, who could not be reached for this story but told Yahoo Sports that White enjoyed the visit to Iowa State, and that talks between White and Kentucky have âÄúcooled.âÄù âÄúHeâÄôs still looking at his options, but he liked the coaches at Iowa State, he liked the campus and he liked the school,âÄù Novak said. âÄúI donâÄôt think heâÄôs made a decision yet, but heâÄôs definitely contemplating it.âÄù Mbakwe has been playing alongside senior Blake Hoffarber while he awaits a July 26 trial date on charges of felony assault that sidelined him all of last season. The trial has been pushed back numerous times since the alleged incident occurred last April , but Mbakwe is confident it will get resolved this summer and that he will see the court for the Gophers next season. But should the trial date get pushed back yet again and if Minnesota athletics director Joel Maturi d oesnâÄôt lift MbakweâÄôs ban from playing, âÄúmost likely I will for sure leave [the Gophers],âÄù Mbakwe said. Mbakwe received permission to explore his transfer options from Maturi in mid-May . During the last game of the night on Thursday, Mbakwe dislocated his pinky finger, but Pulley said he doesnâÄôt expect Mbakwe to miss much time, if any. While uncertainty surrounds the highly-touted class of 2009, the incoming crop of freshman is looking to prove they have just as much talent. One incoming freshman catching the eye of fans and teammates alike is Austin Hollins, a 6-foot-3-inch shooting guard from Tennessee , who has drawn some comparisons to a former Gophers player. âÄúHeâÄôs lanky, heâÄôs a good slasher, heâÄôs almost a little bit like Damian Johnson, but smaller,âÄù Hoffarber said. âÄúI think heâÄôll be useful this year, heâÄôs just got to keep working hard.âÄù Hollins scored 22 points on June 29, making several hustle plays to force steals and create fast breaks. Hollins played alongside junior Colton Iverson and fellow incoming freshman Elliot Eliason for the Pat Madison Magic squad. Pulley said he likes to put most of the Gophers freshman on the same team to get them acclimated to each other. Four incoming freshman play on the Magic, along with Iverson and senior guard Al Nolen. Eliason, a 6-foot-11-inch forward, was a two-time Nebraska Gatorade Player of the Year in high school, but may need to add some muscle if he hopes to compete at the post in the Big Ten. Iverson said he can relate to EliasonâÄôs situation. âÄúAll freshmen, when they come in, need to get a lot stronger,âÄù Iverson said. âÄúThe Big Ten is a lot different than high school.âÄù Sophomore Dominique Dawson , who walked on to the team last season, looked impressive on June 28, going up against his Minnesota teammates, scoring 21 of his 25 points in the first half. Dawson was a redshirt last season, but said he expects to play a role for the Gophers next season. His teammates have noticed DawsonâÄôs improvement. âÄúI think heâÄôs working on his game a lot, and heâÄôs definitely progressing as a player,âÄù Hoffarber said. âÄúThatâÄôs what we want from him, and hopefully he can showcase some more of his stuff this summer.âÄù Hoffarber is just getting back into the game after taking two months off due to a double-sports hernia surgery. Hoffarber said he had been dealing with the pain since December, but took medicine for it until having the surgery after the season. On June 28, Sophomore Rodney Williams , the only recruit from 2009 whose future is secure with the Gophers, looked to the jump shot whenever possible but with mixed results. He finished the game with 24 points. âÄúIt hasnâÄôt been dropping that much, but itâÄôs something IâÄôm working on,âÄù Williams said. âÄúIâÄôm hoping for it to get a lot better.âÄù While this yearâÄôs recruiting class hasnâÄôt been as well-regarded as last seasonâÄôs, which was a top-25 class as ranked by Rivals.com , Mbakwe is confident they will make an impact. âÄúThe incoming freshmen are great; theyâÄôre going to take the Big Ten by storm,âÄù Mbakwe said. âÄúA lot people are down on them âÄ¦ but they stay in the gym and theyâÄôre hungry, so I know they want to prove everyone wrong who doubt [theyâÄôre] high-caliber players.âÄù The Pro City Summer League will run until July 15 at the downtown St. Paul Salvation Army and admission is free .