An interim advocate for grad students

In her year helping lead the Graduate School, Sally Kohlstedt championed for over 12,000 students. 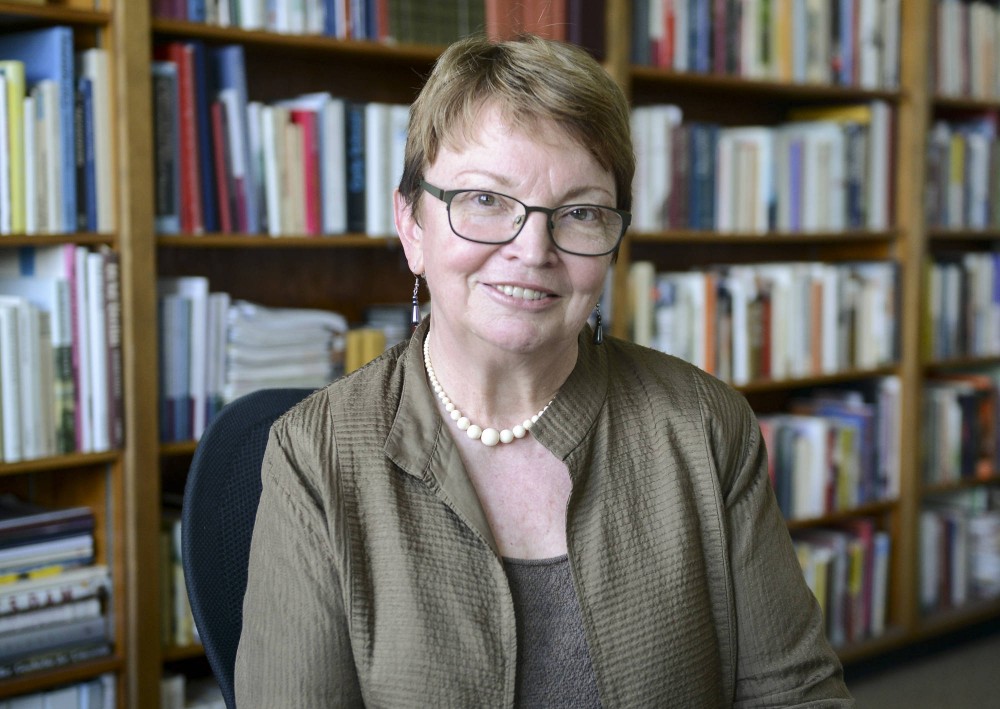 Acting Vice Provost and Dean of Graduate Education Sally Kohlstedt poses for a portrait in her office in Johnston Hall on Thursday.

When Sally Kohlstedt took her temporary post as acting vice provost and dean of graduate education last year, she said she wanted to bring optimism in light of the recent restructuring of the University of Minnesota’s Graduate School.

In that one year as interim head of the Graduate School, Kohlstedt has implemented a number of initiatives to advocate for University graduate students’ needs.

“What I hope I brought was a new sense of optimism about what we really can do and how important graduate education is,” she said. “I had to help revitalize that when some people were feeling a bit disillusioned [and] uncertain.”

Kohlstedt has held the temporary position since last year when Vice Provost and Dean of Graduate Education Henning Schroeder started his one-year appointment as dean-in-residence at the Council of Graduate Schools and the National Science Foundation.

Henning said he was a strong supporter of having Kohlstedt step into the position, noting that she’s been highly involved with graduate education in her more than two decades at the University.

Kohlstedt, a professor in the History of Science, Technology and Medicine graduate program, came to the University in 1989 and has spent her time teaching, researching and writing books on topics like women in science fields.

In her year leading the Graduate School, Kohlstedt said she knew her new position would take up a lot of time, so she put her teaching profession on hold.

Though the leadership role was demanding, Kohlstedt continued to advise her seven graduate students.

Kohlstedt has been a dedicated mentor to many graduate students in her program, said Susan Jones, a professor in the History of Science, Technology and Medicine program who took over as its director when Kohlstedt left.

“For her to spend so much time with her individual graduate students and with graduate education in general is a wonder,” she said. “We all laugh and wonder if Sally sleeps.”

Joe Martin, a recent doctorate recipient, was advised by Kohlstedt. In addition to guiding him in his research, Martin said Kohlstedt helped him gain the professionalization skills he needed to survive in his field.

Martin said he had struggled with applying for a fellowship in Philadelphia, and after what he called a “halting first attempt,” Kohlstedt worked with him through the writing process and helped him land the fellowship.

“Over the last few years, a lot of graduate students have felt like there isn’t a go-to person in order to advocate for their needs,” said Andrew McNally, president of the Council of Graduate Students. “I think that Sally has done a great job at making sure there are resources available for that.”

Last summer, Kohlstedt started a Graduate School orientation program, aiming to bring together the new students and help them feel comfortable on campus.

“[Orientation] makes a big difference in graduate students’ lives in terms of making them feel like they are a broader community outside of their department,” McNally said.

Kohlstedt said she wants the Graduate School to continue working on the many initiatives she put in place this year, including increasing collaboration among different graduate programs.

She has also helped in the effort to establish learning outcomes for each of the Graduate School’s more than 200 programs, Schroeder said.

Schroeder said he plans to continue some of Kohlstedt’s other initiatives, like increasing diversity among students in the Graduate School.

“There are initiatives that were started or grown and continued while I was gone, and I definitely look forward to continuing these initiatives,” Schroeder said.

Kohlstedt plans to take the next year off for sabbatical, where she will do research at the Smithsonian Institution and in
Germany.

She’ll resume her position as a professor in the History of Science and Technology program when she returns to the University in fall 2015.

Though many colleagues in her program said they’ll be happy to have Kohlstedt back, some say her work as an administrator was important and helped move the Graduate School forward.

“I think it’s a loss for the University,” said Mark Borrello, associate professor in the History of Science and Technology department. “She’s done a really effective job in the administration.” Borrello noted that Kohlstedt went beyond the typical interim leaders who just continue their predecessor’s work.

During her short time leading the Graduate School, meeting students’ needs was a top priority for Kohlstedt.

“A research university’s reputation really hinges, in many ways, on the quality of its graduate programs and the students who come,” she said.