David Cobb barely played his first two seasons but has emerged as a star. 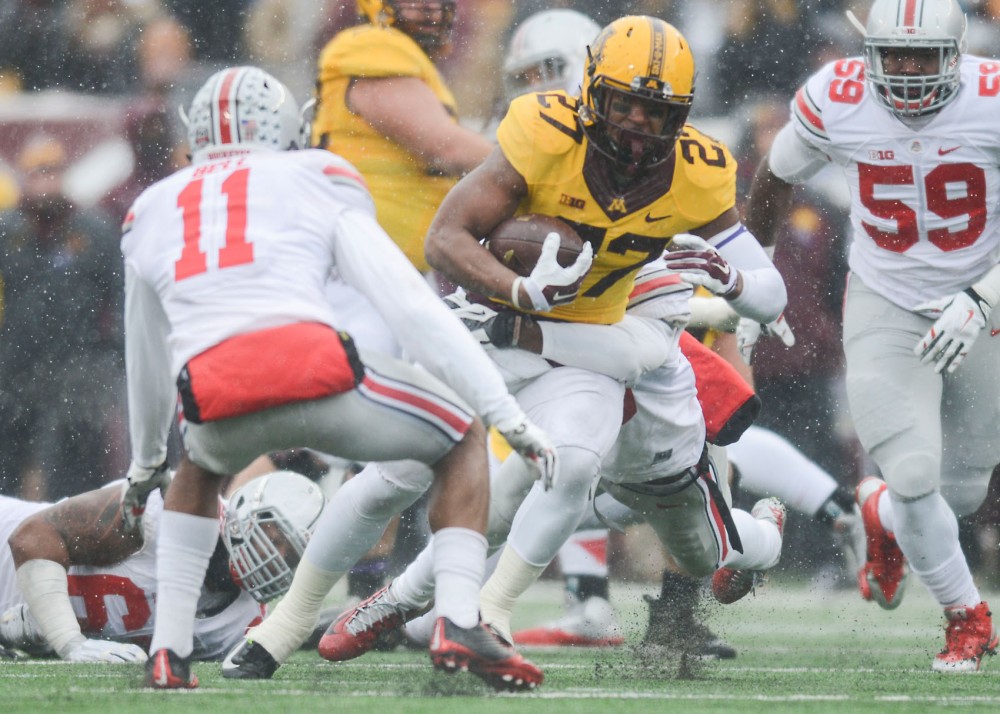 With at least three games left in his senior season, David Cobb is on the verge of getting his name in the record books.

“If you told me two years ago I would be close to this, I wouldn’t believe it,” Cobb said. “It would be huge for me. And not just for me, but for our [offensive] line.”

Gophers head coach Jerry Kill has repeatedly said Cobb’s mental maturation is the reason for his drastic improvement. But Cobb’s patience seems to be a major factor, too.

He hardly played in his first two seasons at Minnesota, recording just 11 carries for 65 yards, but he kept improving. When then-starter Donnell Kirkwood went down with a high ankle sprain in the 2013 season opener against UNLV, Cobb took the opportunity to start and ran with it.

He broke one run for 60 yards in the contest. And by the time nonconference play was over, Cobb had solidified himself as Minnesota’s starting running back.

But Cobb’s improvement from his first season as a starter, in which he finished with 1,202 rushing yards, to now is due in part to his patience on the field.

“He’s very patient to the hole; he brings people to him. Linebackers, they’ll step up and then he’s able to make that slide cut and do what he does,” Kill said.

And Kill isn’t the only one who has noticed.

“I think he’s just developed into a complete back. [He’s] being patient, knowing where to hit his holes, not trying to force anything,” tight end Maxx Williams said.

When asked in July about Minnesota’s receivers, Nebraska safety Corey Cooper said he didn’t remember much about them. And what stood out from his team’s 34-23 loss at Minnesota last season was the Gophers running back.

“Cobb, he’s a physical guy, a good player, somebody they leaned on heavily. He was a big part of the offense last year,” Cooper said at Big Ten Media Days.

He’s been an even bigger part of it this year. Cobb has carried the ball 254 times, which is the second-highest mark in the nation.

The Killeen, Texas, native is averaging 135 rushing yards per game this season and could nab the program’s record on Saturday going up against Cooper and Nebraska. The Cornhuskers’ rushing defense has been suspect as of late, which could lead to a big game from Cobb.

But after the Badgers blew them out last week, Gophers offensive coordinator Matt Limegrover expects the Cornhuskers to rebound.

“They’re pretty salty,” Limegrover said. “I have a feeling we’re going to see their ‘A’ game — playing [Wisconsin], coming off that game, they’re going to be ready to go.”

While Cobb is one of the best running backs in the country, his style of running differs from other top Big Ten runners, like Gordon, Nebraska’s Ameer Abdullah and Indiana’s Tevin Coleman.

Abdullah, Gordon and Coleman all have the power to break tackles, but they use their top-end speed to evade defenders. Cobb isn’t as fast, but uses his blocks well and utilizes a more physical running style to chug away at opposing defenses.

“He was just so consistent with 4 or 5 yards, and before you know it, he’s rushed for almost 200 yards on you because he [is] consistently just power, power, power. He’s really good between the tackles, and he’s very underrated,” Abdullah said at Big Ten Media Days.

That kind of consistency will likely get Cobb the Gophers’ single-season rushing record.

“I don’t really think about it,” Cobb said.