The women’s team lost its two Big Ten duals on the road over the weekend. 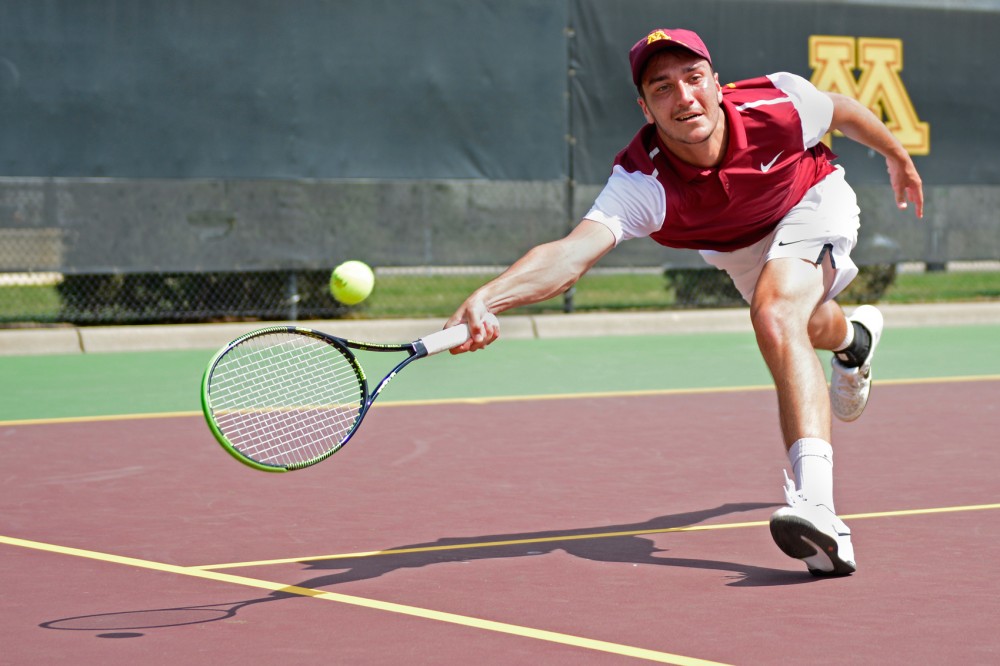 Jack White
The Gophers capped off their senior day with a 4-3 victory over Penn State on Sunday, after losing to Ohio State 4-0 Friday.
The victory was the team’s second of the Big Ten season.
“I really thought we were going to play better [Sunday], and we did, and it was nice to be rewarded for it,” head coach Geoff Young said.
Minnesota (8-15, 2-7 Big Ten) lost the doubles point to the Buckeyes on Friday with losses in the two matches that were finished.
Ohio State also swept in singles play to win the dual 4-0.
The Gophers also lost the doubles point to the Nittany Lions, although the pair of sophomores, Felix Corwin and Matic Spec, was able to win its match.
The two teams then went back and forth in singles play and entered the final match tied at 3-3.
Freshman Justyn Levin squared off against junior Aws Laaribi of Penn State, who suffered an injury during the match.
Laaribi was able to get back up and play, but Levin won the match to give Minnesota the victory.
“[It’s] probably the best experience I’ve had as a Gopher so far,” Levin said. “At first I was hoping he’d probably retire so I’d get the match, but I just tried to stay composed, concentrate on what was ahead and just keep fighting at every ball.”
Women’s team goes 0-2
The women’s tennis team played two duals on the road in Indiana over the weekend and lost both.
The Gophers lost to Purdue 4-3 on Friday and Indiana 5-2 on Sunday.
“Our only focus now is that we send these seniors off with two good wins next weekend at home,” head coach Chuck Merzbacher said. “We know what we have to do. … We’re trying really hard to extend the season, and we want to make the Big Ten Tournament and do well there.”
The Gophers took on Purdue for the first dual of the weekend on Friday.
Minnesota lost the doubles point with losses in the No. 1 and 3 positions. The doubles point proved crucial as both teams earned three singles victories and Purdue won by a score of 4-3.
Minnesota’s second dual came against Indiana. The Gophers lost the doubles point when the Hoosiers earned victories in the No. 2 and 3 doubles positions.
Freshman Camila Vargas Gomez and senior Paula Rincon-Otero earned victories in singles competition, but the team fell by a score of 5-2. Vargas Gomez was the only player who won both of her matches over the weekend.
“For both matches I tried to keep doing the same thing,” Vargas Gomez said. “Now I’m trying to step in more often and be more aggressive when I have to be and control the points I have to control.”
Delete Image
Align Left
Align Center
Align Right
Align Left
Align Center
Delete Heading