University President Eric Kaler sat down with the Minnesota Daily on Friday. 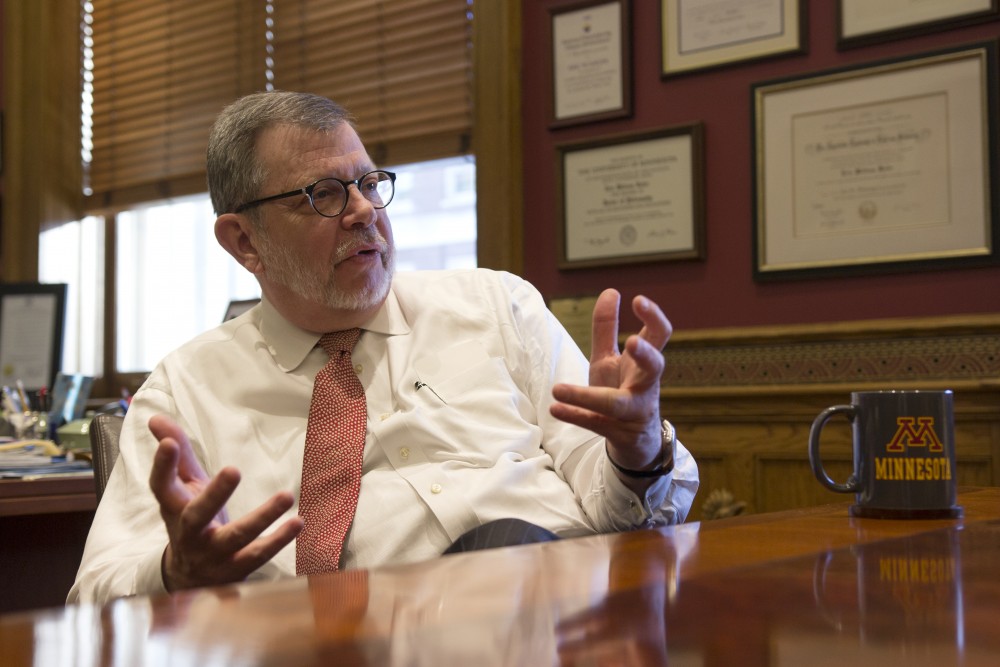 University of Minnesota President Eric Kaler fields questions from the Minnesota Daily in his office on Friday, Feb. 9.

The Minnesota Daily sat down with University of Minnesota President Eric Kaler Friday for this semester’s first monthly interview.

Kaler discussed the University’s legislative priorities, the President’s Initiative to Prevent Sexual Misconduct and the planned closure of the University’s Child Development Center, among other topics.

Did you check out the Super Bowl last week at all?

We had the NFL Honors here in Northop, which was fun. So my wife and I, we went to that, which was interesting. … But I did not go to the game. We have a tradition of watching it with friends and [my friend] bought a new TV with speakers so we went over and checked it out.

Last time you sat down with the Minnesota Daily you mentioned that a few of your biggest goals for 2018 are developing the 2019 budget and advancing the University’s legislative agenda, so looking specifically at this semester, what are your top priorities?

Getting a good bonding bill is really critical to the future of the University. … This is also the time in which we are developing our operating budget for the next fiscal year. … And that will engage a lot of conversations around things that we’re going to do … [and] around what tuition will be. And again some conversation with our [legislators] about the potential for a supplemental budget that might bring in some more operating dollars. So that sounds all about money, and that’s a necessary, but not sufficient, thing for a University to have. So we’ll also engage in exchanges with faculty governance and student governance around the student conduct code and other issues that will come forward.

Your annual State of the University speech is coming up March 1 … have you started thinking about the themes and topics you might address?

Why are those the most significant?

I think right now, in this country there’s incredible tension, uneasiness, a real inability for people with opposing points of view to come together and talk and try to understand each other … and universities are the place where that kind of dialogue should be able to take place in a safe and respectful environment. And I’d like this University to be that kind of place. And I don’t think there’s any element in our society now that is of more urgency to address than issues of sexual harassment. You’re seeing it from Hollywood to tailgate parties, and we have a good plan to tackle this — to change culture. It’s going to take time, it’s going to take a lot of work, but I think we can get that done.

So we kind of talked about this already, but the U of M’s 2018 bonding request is among the largest in the past five years. Governor Mark Dayton has proposed an addition $60 million more in capital funding than the University’s request. What was your reaction to his proposal?

Well I was quite obviously delighted by his proposal. He has been a very good friend of the University during his time as governor. … The principle area of increase was in HEAPR, the Higher Education Asset and Preservation Repair fund. And that’s completely consistent with our theme of requesting items that help us renew our campuses. No big, bright, shiny new objects, but renewal and reinvestment in what we have.

What do you expect the outcome to be during this legislative session?

I think the economic climate combined with the fact that it’s an election year will help generate a bonding bill. I think the historical barrier to having a bonding bill that’s more than a billion dollars is a significant challenge. … The governor’s proposal is $1.5 billion, and we are about 20 percent of that — about $300 million. So a target of 20 or 25 percent of the final bonding number is … probably realistic. But we will be aggressively looking for all that we can get.

Many parents are scrambling to find childcare options after the University announced last month that the Child Development Center would close in the summer 2019. And yesterday families delivered a petition with 3,000 signatures to Morrill Hall. The University has declined to discuss … much about the decision. Can you tell us more about the reasons for the closure?

Well, I don’t think we have really declined much to talk about this, but Jean Quam, Dean of [the College of Education and Human Development], is the administrator responsible for the child care center. She has use for the space where the current daycare center is to relocate the lab school as part of renovations of the Institute of Child Development. … The daycare center also receives a substantial … subsidy from CEHD. … That’s a decision she makes, and I support that. The next step then, of course, is for us to come together as a community and say, ‘What is the University’s responsibility and opportunity in providing daycare for our faculty and staff and students?’ … In this environment, we’re quite optimistic that one or more private partners would be eager to partner with the University. … So we have a request for proposals being developed to look for these private partners. And we’ve asked for volunteers for a group to help steer that conversation. … And we’ve had over 100 people volunteer to do that.

The President’s Initiative to Prevent Sexual Misconduct, which is the product of a task force you assembled last spring in response to growing concerns about sexual misconduct, is a multistep initiative that launched this year. What stage is the initiative in now?

Right now we’re … just really rolling out the action steps. So we have developed training in accord with the Faculty Senate … for faculty and staff. It’s being piloted [by] about 700 employees and about 300 supervisors … I took it this week. I found it useful. … I hope others will also find it useful. … About 40 percent or so, I think, of that target group have taken the training so far. We’ll then assess and make it available to the broader population going forward. We’re also, in parallel, doing a variety of other things. … We understand that one hour-long training session is not the end of the process. It’s just barely the first step, and there are going to be a variety of other elements rolled out at the department level, additional training for students throughout their four years, etc.

Why is this topic important for you? … This is a pretty large initiative.

I don’t think we have any greater responsibility than creating a place for men and women to come, to learn, to grow, to be safe. And the incidents of sexual misconduct are just personally unacceptable to me, so it’s a very personal thing.

What are the next steps for the initiative?

We have a roll-out plan … faculty, staff training, student education, engagement and training, awareness campaign, research and evaluation, and then closing the loop and going back to see what works. A big theme will be bystander intervention — the idea that if you see something happening, it’s not OK to just say ‘Oh, you know, they’re just doing their thing.’ … You have to have the training and the gumption to intervene.

Can you tell me a little more about [the training], the experience?

It’s very nicely done, in my opinion. [It] lays out the factual information, the definitions, identifies the University policies that are relevant, and then outlines the employee obligations in reporting sexual harassment — that you need to go to the Title IX office. … [There are] a variety of real life scenarios that I found pretty realistic and pretty useful in understanding what sexual misconduct looks like.

Gopher men’s basketball member Reggie Lynch was recommended for expulsion by the University’s Equal Opportunity and Affirmative Action office in early January after an investigation from a spring 2016 sexual misconduct case. This is the third time the EOAA has investigated Lynch for sexual misconduct. Can you tell us about the vetting process for transfer student athletes?

I can’t talk about the specifics of any particular student, as I think you know. … So [let’s say] we have a hypothetical transfer student. The coaches understand their responsibility to know about the player that they’re recruiting, and certainly know that the recruiting of somebody involves not only an assessment of their athletic ability, but of how they’re going to fit into the team and how they handle themselves in society. I’m sure that was [done] by our coaching staff.

Do you have faith in the process?

Oh, absolutely. And an important reason that I hired Mark Coyle now a year and a half ago, a little more, was his absolutely superb reputation as a person with very high moral standards and very high ethical standards. He has taken the issues of culture and morale in athletics very seriously. He’s brought in external experts. He has turned very serious attention to that issue, and I think will be able to affect any changes needed.

Editor’s note: This interview has been edited for length and clarity.