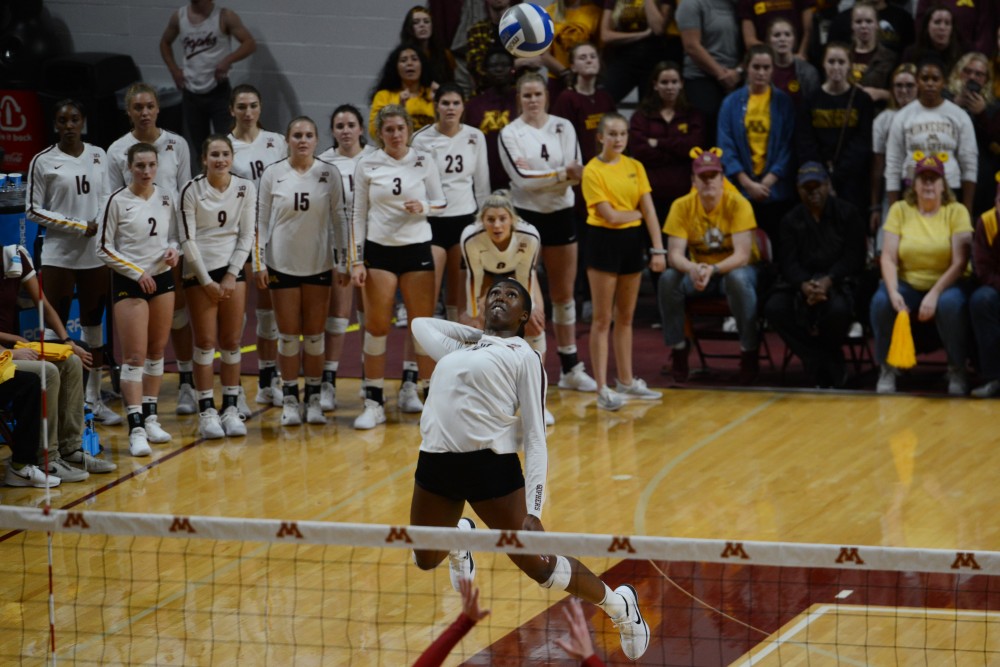 Sophomore Stephanie Samedy spikes the ball on Tuesday, Sept. 26 at Maturi Pavilion. The Gophers beat the fifth-ranked Wisconsin Badgers in three straight sets. Samedy had 14 kills, and leading the Gophers in kills for the seventh straight game.

Recently named AVCA Player of the Week, sophomore opposite hitter Stephanie Samedy along with junior Alexis Hart led the Gophers’ with 14 kills in the teams third straight sweep.

“Being in the mindset of, ‘I’m going up there and I’m going to get a point,'” Samedy attributed to her success.

In the first set of a highly-contested match, the Gophers started hot leading 5-2. From there on, the set was neck-and-neck.

Samedy was on fire for the Gophers, racking up seven kills before the first break of the night.

“Technically I was sound and making sure I was making the right moves,” Samedy said.

The Gophers scored multiple points on competitive rallies, showing the team’s ability to stay zoned in and finish out the point.

“On the defensive end, there was a lot of discipline,” McCutcheon said.

The Gophers’ took a 10-7 lead after a dominating spike by Samedy.

After a timely kill by redshirt sophomore Reagan Pittman, the momentum swung back in favor of the Gophers’ who scored eight of the last 10 points winning the set 25-17.

Samedy led the Gophers with eight kills while hitting .778 percent. The defense was also a major factor in the set — Minnesota had 19 digs.

“We were able to dig a lot of balls and turn a lot of opportunities,” McCutcheon said.

Wisconsin started off strong in the second set taking an early 5-2 lead. The Gophers started coming back after few service errors and two kills by Hart.

Wisconsin had a slight 10-8 lead in the set when the Gophers caught fire and went on a 6-0 run and took a 14-10 lead over the Badgers.

The set went back-and-forth from there. The Gophers would score two points and the Badgers would answer with two of their own.

The Badgers fight wasn’t enough as the Gophers won the set off a powerful Samedy spike to go ahead 2-0 and winning the second set 25-21.

Hart led the Gophers in the second set with five kills.

The Gophers began the final set dominating the Badgers. They accounted for the first eight points of the match and never looked back.

The early attack was a team effort. Samedy and Hart had two kills along with a service ace by senior Samantha Seliger-Swenson.

Although the Badgers began to fight back it was all too late. The Gophers lead by at least five throughout the entire set and won 25-15.

A contributing factor to the offense’s efficency was Seliger-Swenson’s ability to spread the net.

“[Sam’s] ability to create the net is pretty special,” McCutcheon said. “I’m sure that had something to do with everyones game as well.”

The Gophers will travel to Bloomington, Indiana Saturday to face the Hoosiers in hope for a fourth-straight win.