In her poems, torrin a. greathouse sheds light on systems of violence against transgender bodies. 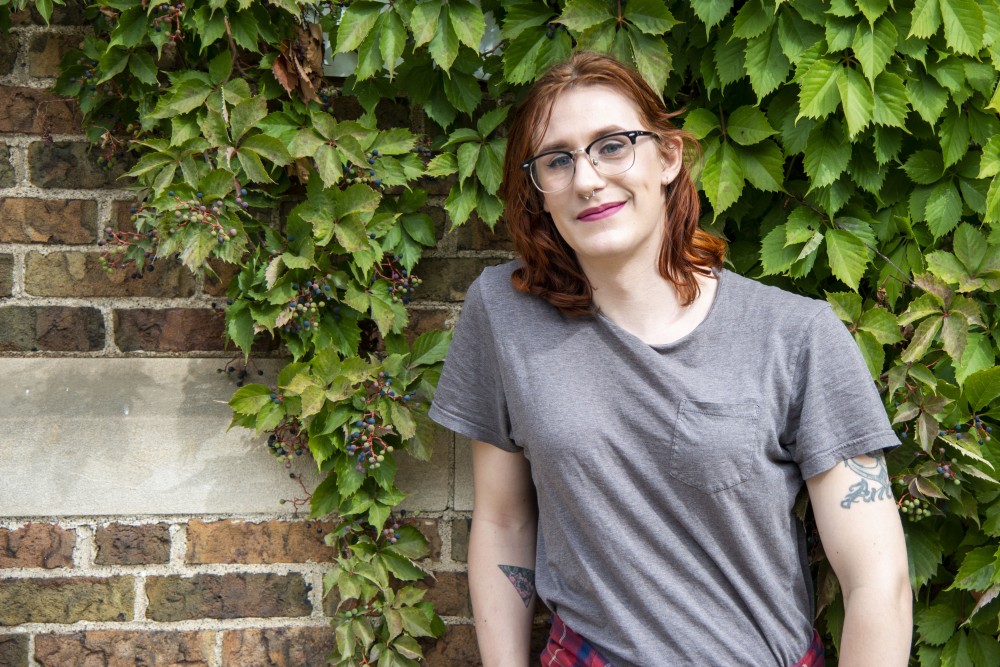 torrin a. greathouse poses for a portrait outside of Bordertown Coffee on Thursday, Sept. 26, 2019.

Earlier this month, University of Minnesota graduate student torrin a. greathouse won a major award from Poetry, a leading monthly poetry magazine, for her poem “On Confinement.”

The poem, which was published in last year’s November issue of Poetry, examines the experiences of queer and transgender bodies under varying forms of confinement. In the poem, greathouse — who prefers writing her name in lowercase letters in line with other queer writers and poets — reflects on her own experiences with confinement as a transgender woman.

In 2016, greathouse was arrested after driving under the influence. As a transgender woman, she was not held with the rest of the prisoners. Instead, greathouse was in solitary confinement.

Almost a year later, greathouse encountered similar transphobic slurs and aggressions when she was visiting her former partner who was being held in a mental health facility for two weeks.

“[Both places] exert certain forms of hyper-specific violence against trans and queer bodies and then connecting that with my father’s own history … as a corrections officer and a sheriff,” greathouse said. “If you’re thinking about various forms of confinement, an abusive family can also be seen as a form of literal confinement.”

greathouse is in her first year of the University’s Master of Fine Arts program in creative writing. She has been doing poetry professionally for around five years, and her work has appeared in several publications, including Poetry magazine, the New York Times and the Kenyon Review.

Upon joining the MFA program, greathouse, along with other students and professors in the program, did a poetry reading at this year’s Minnesota State Fair.

“torrin was preparing to read these poems which were really dealing with gender, homophobia, transphobia and were unapologetic in their language,” said Douglas Kearney, a University creative writing professor who also read poems that day. “…And torrin is reading these poems that are actually putting her body at risk. Anyone could have decided that they did not like what she was saying —and there she was. torrin isn’t afraid of much,” Kearney added.

greathouse said she is critical of the role empathy plays in the production and reception of art. “Empathy fails people of color and disabled folks as well as trans folks because studies have shown that people tend to express higher empathetic reaction to people who look like them,” greathouse said.

“As someone who is trans and disabled and also autistic, the idea of empathy has always been very fraught for me. Particularly, empathy is talked about so much in activist and art spaces, but many people don’t experience empathy,” greathouse said.

greathouse also challenges the origins of words, often approaching poetry through language itself. “Language is an artifact. It is an object, and no word exists without history,” greathouse said.

In “On Confinement,” greathouse looks at prehendere, the Latin root of the word ‘prison’ which means ‘to take.’ “I talk about … what it sort of means to go back to the history of a word, and no history exists without blood. Oftentimes my poems are trying to trace the blood and the violence of the language they contain.”

“You ever speak to somebody who sounds like they’re kind of on their last nerve? They’re speaking very controlled and very carefully, but very specifically,” Kearney said “That’s one of the ways you can understand the voice in several of torrin’s poems. It’s a control that is not about repose. It’s not about relaxation. It’s not about tranquility. It’s about holding something in tension.”