The senior is up to 99 goals so far in her career entering play this weekend. 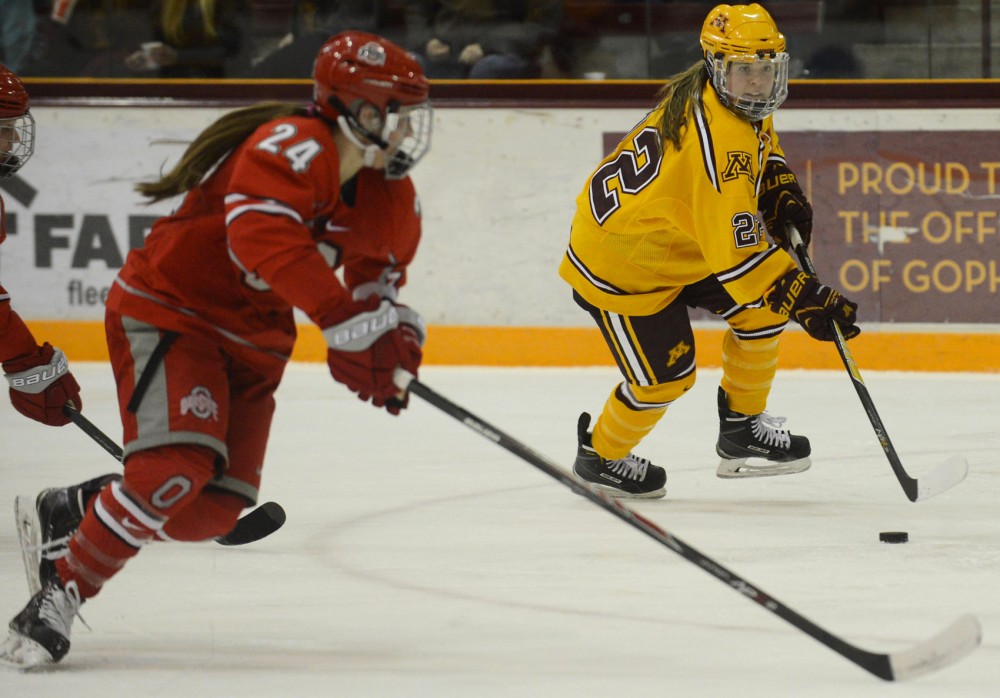 Emily Polglaze
Even after three conference championships, two national titles and two WCHA player of the year awards, senior forward Hannah Brandt is still adding accolades in her final season with the Gophers.
Brandt is just one goal away from hitting 100 in her career, a feat only three other players in program history have accomplished.
“I talk all the time about Hannah and what an incredible person and player she is,” head coach Brad Frost said. “So to have her approaching that milestone is a real big deal.”
Brandt began her senior season with 90 goals and added nine in the team’s first six games.
Four of those came in Minnesota’s fourth game of the season against St. Cloud State University on Oct. 10.
Brandt had another hat trick and three assists on the road at Ohio State University in the team’s 11-2 victory on Saturday. Brandt’s first line alone accounted for 15 points in the game.
Brandt would join the ranks of some successful alumni with one more goal.
Nadine Muzerall, Krissy Wendell and Natalie Darwitz are the only three players who have scored 100 goals for the Gophers.
Muzerall leads Minnesota for most goals all-time with 139, while Wendell has 106 and Darwitz has 102.
Wendell won the Patty Kazmaier award for the top women’s collegiate hockey player in 2005. Brandt has been a finalist for the award three times.
Darwitz is Minnesota’s all-time point leader with 246. Brandt needs 11 more points to become the all-time leader over Darwitz.
Muzerall is the only player with more than 100 goals to play four seasons at Minnesota, while Brandt would become the second.
Muzerall joined the Minnesota coaching staff in 2011 as an assistant, and been with the program for every goal of Brandt’s career.
“She’s a great addition to our staff for forwards,” Brandt said. “She teaches us a lot about quick shots and releases, and I think those were some of her stronger points when she played.”
Muzerall said she thought about the milestone as a player, but she’s thought about it more after her career was over.
Muzerall also sees an opportunity for Brandt to edge her out in goals this season, which would break the current program record.
“I thought about that. I was going to bench her a little bit,” Muzerall joked. “But if I had to give it up or share it with anybody, why not Hannah Brandt? She’s a great all-around kid and player. She just might do it.”
Brandt is off to a fast start to her senior season, with 15 points in six games so far.
But as big milestones start to approach her, she said she doesn’t want to focus on her numbers.
“I’ll probably forget about it until somebody reminds me that it’s my 100th goal,” Brandt said. “And then I guess it’ll be pretty cool to be up there with those names.”
Delete Image
Align Left
Align Center
Align Right
Align Left
Align Center
Delete Heading