Minnesota will take on Boston University in the NCAA quarters. 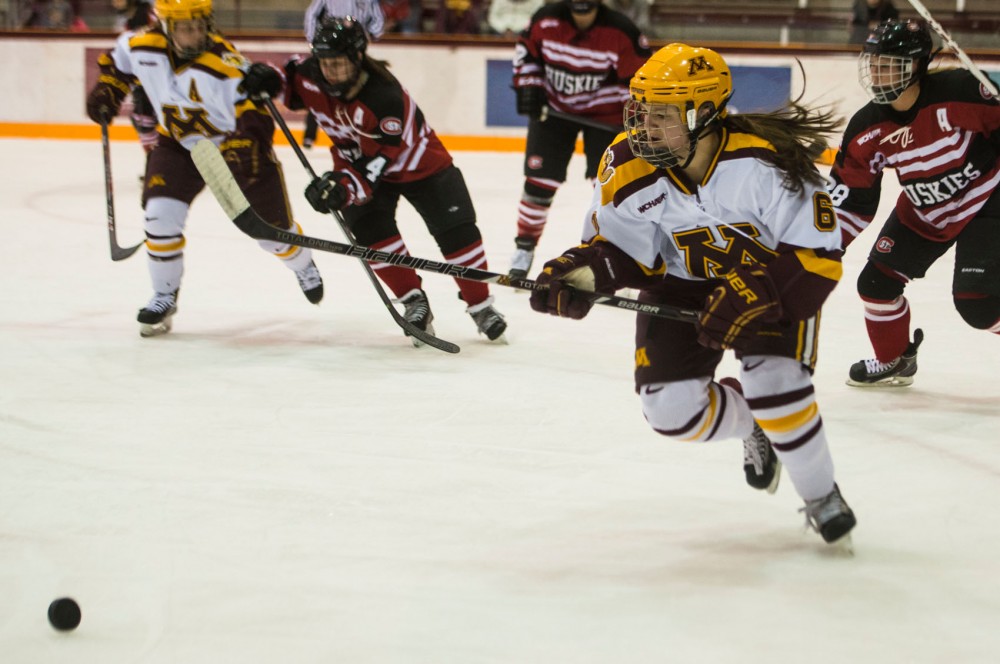 Gophers forward Kate Schipper chases down the puck during the second period on Friday, Feb. 28, 2014.

The Gophers ended Boston University’s season last year. This weekend, they’ll try to do it again.

This year, the two teams will meet in the NCAA quarterfinals Saturday at Ridder Arena.

“We have the target on our back every day right now, being the defending champs,” sophomore forward Hannah Brandt said.

That’s especially the case for the Terriers, who will be looking to avenge last year’s 6-3 loss in the title game.

Minnesota and BU both lost last season’s top forwards to the Olympics this season.

Marie-Philip Poulin of BU scored the game-tying and game-winning goals to clinch the gold medal for Canada last month.

“With Poulin out of the lineup, it’s kind of like us not having [Amanda] Kessel in the lineup,” head coach Brad Frost said, “so I think it’ll be a real good game, very similar to last year.”

Frost said he thinks Poulin’s absence is the biggest difference for this year’s BU team, which still boasts two of the top five goal scorers in the nation in Sarah Lefort and Louise Warren.

The Gophers got back to practice Tuesday after the members of last year’s NCAA title team visited the White House on Monday.

The timing of that trip wasn’t ideal, but with a game of this magnitude coming up, the team has shifted its focus to the task at hand.

“I was worried about that being a distraction,” Frost said, “but we have a mature club, and they get it, and [Tuesday] we were able to get back on the ice and just hit the reset button and get ready for this weekend.”

The last time they lost an NCAA tournament game was in 2011. This year’s group of seniors has been in the NCAA quarterfinal three times, and this will be their fourth trip to the tournament.

“They know the importance of the game, as does the rest of the team, and the freshmen are just following,” Frost said of the seniors.

Gophers freshman forward Kate Schipper said she’s nervous for the weekend, but she said the seniors have been helpful.

“It’s such a big deal, and this is my first time going at it, but [it’s] a good nervous,” she said. “[It’s] an excited nervous, not like a nervous that’s going to inhibit my play.”

The weekend also gives the Gophers a chance to play a non-WCHA opponent, which they haven’t done since December.

The Gophers are undefeated in nonconference play this season.

“It’s definitely exciting because sometimes you get tired of playing teams in the WCHA, so it’s cool to change it up and play someone [from] out east,” Schipper said.

If the Gophers win, they could draw Wisconsin, the only other WCHA team in the tournament, in the semifinals.

That game will be played in Hamden, Conn., as part of the NCAA Frozen Four.