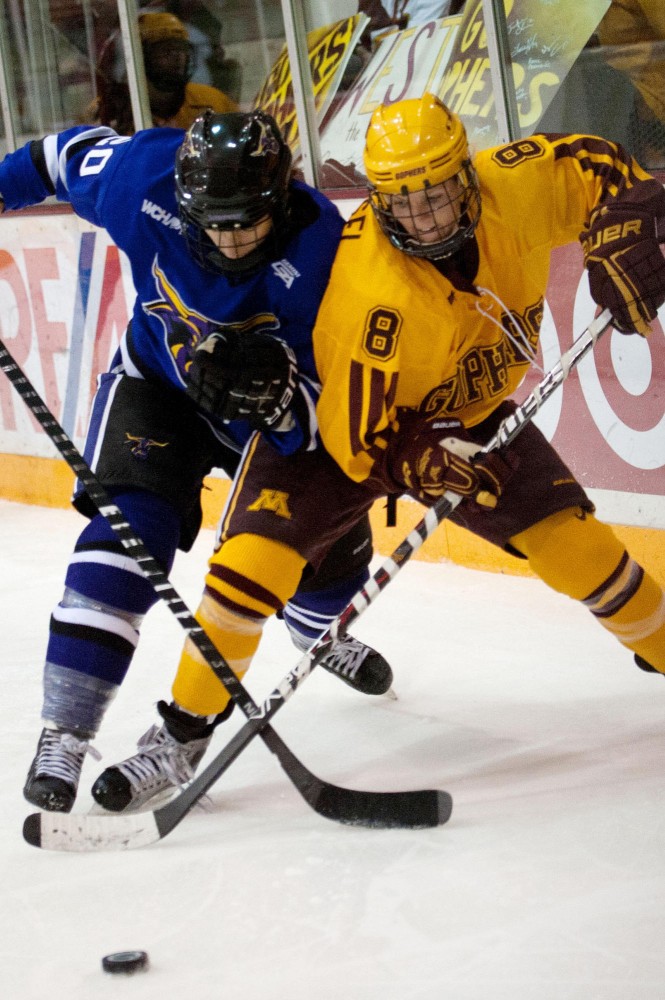 The No. 2 Minnesota womenâÄôs hockey team improved to 7-1-0 this past weekend with two shutout wins over Minnesota State.

The series, normally scheduled for Friday and Saturday, was moved to Thursday and Friday because of SaturdayâÄôs homecoming football game.

All-American goaltender Noora RÃ¤ty sat out ThursdayâÄôs game with an undisclosed injury. Freshman Shyler Sletta was outstanding in her first career start in goal and recorded a shutout in the GophersâÄô 3-0 victory. She said after the game that she was not nervous at all.

She was aided by a defense that allowed only 20 shots on goal.

Sophomore forward Sarah Davis scored her first two goals of the season and junior defenseman Megan Bozek added a goal of her own.

The Gophers were constantly in the MavericksâÄô zone, and recorded 52 shots.

The dominance continued Friday night with a 7-0 victory.

Six Minnesota players had goals, and 12 scored points in the win. Sarah Erickson had two goals, Amanda Kessel scored her team-leading ninth goal and had two assists and Bozek added a goal and an assist.

Davis and Meghan Lorence each had two assists for the Gophers, who scored four times on the power play.

Minnesota outshot the Mavericks 35-19, but didnâÄôt look as dominant as it did Thursday night.

âÄúWe played much better last night than we played tonight,âÄù Frost said after FridayâÄôs game. âÄúTonight we played a very good 20 minutes … In the first time in a long time, we came out great in the third period at home when we had the lead, and extended the lead.âÄù

RÃ¤ty returned to the lineup, and recorded her third shutout of 2011. She made a number of key saves in the first and second periods to hold off an aggressive Minnesota State attack, and Minnesota took a 3-0 lead after 40 minutes of play.

âÄúI thought [in] the first two periods, we got some fortunate goals and [RÃ¤ty] made some saves,âÄù Frost said. âÄúI didnâÄôt think we were necessarily playing well enough to be up 3-0.âÄù

Minnesota put the game out of reach with four goals in the first 12:04 of the third period. The Gophers outshot the Mavericks 15-3 in the final 20 minutes after holding just a 20-16 shots on goal edge in the first two periods.

âÄúI didnâÄôt even know it went in at first until everyone came towards me,âÄù Anderson said. âÄúIt was kind of a surprise.âÄù

The three freshmen have combined for eight points on the season, three of which came Friday against the Mavericks.

Minnesota travels to Bemidji State for its next series Oct. 28-29.