Gophers end 2017 with a blowout win versus Minnesota-Duluth

The line of Grace Zumwinkle, Taylor Wente and Nicole Schammel combined for 14 points over the weekend. 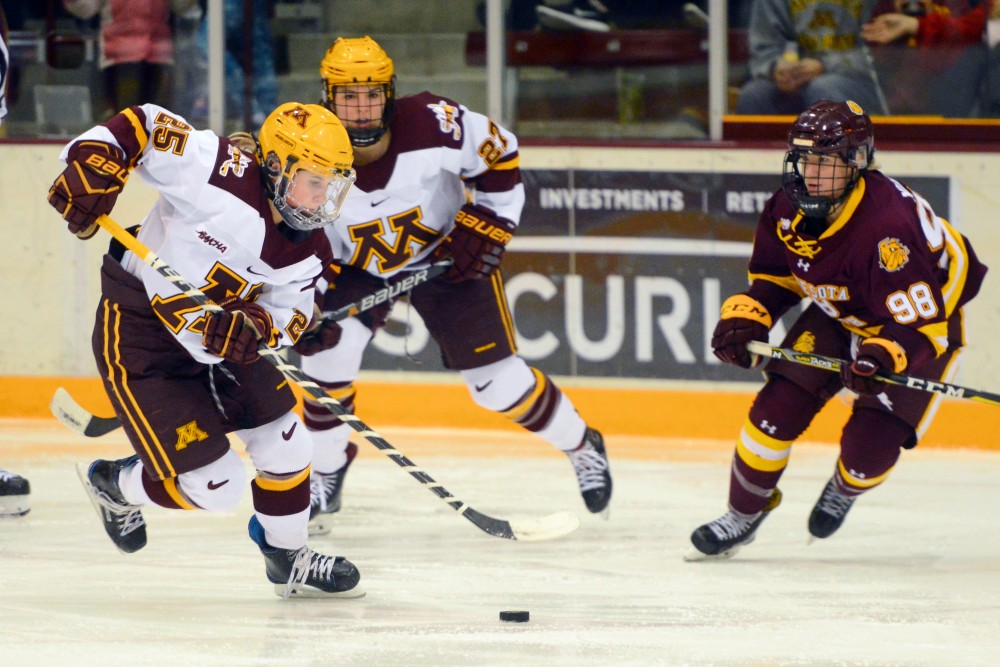 Grace Zumwinkle rushed down the middle of the ice, put a move past the Bulldogs’ goaltender Jessica Convery and scored a goal with under 10 seconds left in the second period.

The score made it a five-goal deficit for Minnesota-Duluth, and the Gophers kept it that way.

The Gophers (15-5-2, 10-4-2 WCHA) beat Minnesota-Duluth (9-11-1, 5-8-1-1 WCHA) 5-0 in the second game of the weekend series. The Gophers were led by Nicole Schammel who had two goals. Taylor Wente, Sophie Skarzysnki and Zumwinkle all scored as well. The Bulldogs scored two unanswered goals, which led to a tie, in the third period of the first game. Head coach Brad Frost said he liked the way his team responded on Saturday.

“They took last night pretty personally,” Frost said. “They approached this game like it was their last game, and that is how we have to approach every game.”

Wente scored her eighth goal of the year with 5:15 to play in the first period. Schammel, 41 seconds later, put the puck in the net. The period ended with Skarzynski getting a pass from Caitlin Reilly and beating Convery with a wrist shot. Players celebrating the goal fell to the ground as the Gophers led 3-0 after the first period.

The second period saw the Gophers extend the lead. Three minutes into the period, Schammel scored her second goal of the game and 11th goal of the season after a scramble in front of the net. The play was reviewed, but ruled as a good goal.

The Gophers registered two shots on goal in third period. Sidney Peters ended the game saving 18 shots that night en route to her second shutout of the season. Throughout the two games, the line of Schammel, Zumwinkle and Wente scored 14 points.

“I think we [Zumwinkle and Wente] read each [other] well, she has a really good shot and I see her on the ice, we both have strengths and we use them very well,” Wente said. “We are also roommates so we have a good connection that way.”

The No. 6 Gophers looked poised to win with eight minutes left in the third period, until the Bulldogs climbed back to steal a shootout victory in game one of the weekend series.

The Gophers lost in a shootout to their rivals from Duluth after the game ended in a 3-3 tie Friday night in overtime. Wente, Zumwinkle and Reilly all scored goals for Minnesota.

“Being up two goals twice in the third you got to find a way to win that hockey game,” Frost said. “There are good ties and bad ties… Tonight, you don’t feel real good about this tie.”

Zumwinkle sent it past the goaltender with 16:32 to go in the period to give the Gophers the first of their two-goal leads. Minnesota-Duluth’s Katerina Mrazova answered Zumwinkle’s goal after battling in front of the net. Reilly would net her goal after Zumwinkle powered a shot at net that trickled down to Reilly’s stick. That would be it for Minnesota’s scoring, however, because the next two goals came from the Bulldogs’ Ashton Bell, who led the comeback. She scored her two goals in the last eight minutes to send the game to overtime.

“Going forward, we have to continue to build on the momentum we create earlier in games,” Zumwinkle said.

In overtime, neither team could get anything good on net and the game went to a shootout. Duluth won the shootout 2-1 after five rounds.