The Fashionista is in: Out with the old, in with the new 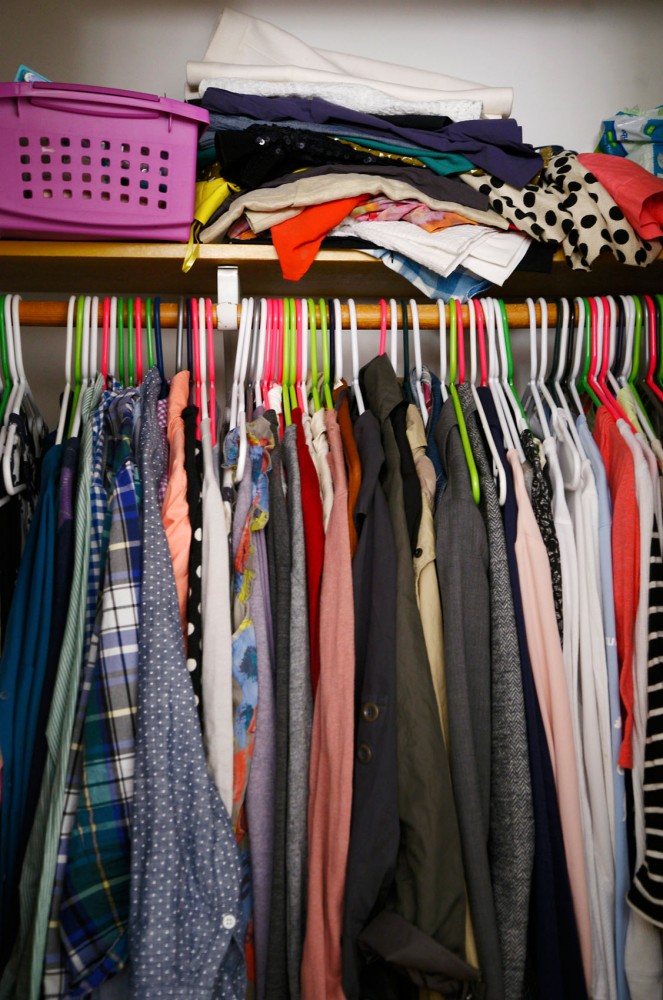 Does this look like your closet? Time for spring cleaning.

Spring is here, and that means it’s time to clean out your closet to make room for fun, new things. However, it can sometimes be challenging to part with old clothes — what if you get rid of something and it comes back in style next year? Luckily, you have this handy little guide to what you should keep, toss and repurpose for 2014.

We all thought wedge sneakers were cool for a moment, thanks to French designer Isabel Marant. But it turns out sneaker wedges were just another fad that became mainstream a little too quickly. I contemplated buying them for months, and that’s about as long as this trend lasted.

You’ll probably have luck selling these to a trendy consignment store like Buffalo Exchange because they might not know that all the cool kids will be getting rid of theirs. If you really like the sneaker look, go buy a flat pair and leave the wedges back in 2013 where they belong.

Believe it or not, turtlenecks are coming back. Erdem, 3.1 Phillip Lim and Prabal Gurung all featured them prominently in their pre-fall 2014 collections. A solid black turtleneck will be a chic layering piece come fall, and chunky turtleneck sweaters are a sure way to stay warm and on trend.

Hold on to these. You might think they look matronly now, but if you toss them, you’ll be digging through your mom’s closet in a few months. Keep your turtlenecks now, and thank me later.

How long have you been holding on to this jean jacket? Probably too long, but that’s okay because denim vests are totally cool right now, and you don’t even have to buy one! Turn the jacket inside-out and use a seam ripper (or scissors if you REALLY trust yourself) to carefully remove the stitching around the sleeves. VoilÃ : You have a denim vest to add some edge to your pretty spring dresses.

If you own a plain black bandage skirt that isn’t too short, you can keep it. If it’s patterned, colored or too short and tight, you should probably give it to your younger sister to use for dress-up.

As a college student, you’re too close to becoming a real adult to wear a skin-tight, hot pink skirt. So toss the funky bandage skirts, unless you enjoy getting cat calls from creepers on your way to Blarney.

It depends on the saying, but in general, t-shirts with words on them are pretty tacky. Any t-shirt with a brand name anywhere other than the back tag needs to go. If it says something that Abercrombie & Fitch might put on a tee, or if it’s actually from Abercrombie, burn it.

If I find out that you have a Tapout shirt or something from Ed Hardy and aren’t an MMA fighter, we will never be friends. Get rid of them as soon as physically possible.

Of course, there are exceptions to this rule. Anything written in French is usually acceptable. Ask your friends if you look like a tool when you wear said shirt, and if they hesitate at all to say no, throw it away.

High-low skirts and dresses, also known as mullet dresses, had a good run back in 2013 but aren’t coming back anytime soon (sorry). If you feel comfortable enough with a sewing machine, you should try to hem yours into one consistent length. That way, you’ll get to keep that cute dress and also look like you belong in 2014. Just don’t make it too short.

Plaid will probably never go away in Minnesota because, let’s face it, we need those warm flannels to survive winter. Even though you’re probably tired of the same four plaid shirts you’ve been wearing since November, hold on to them. Plaid was shown in at least 10 designers’ fall collections, from Victoria Beckham to Thakoon.

And it wasn’t just plaid shirts. Plaid skirts, dresses and pants are all fair game — the more plaid, the better. Keep anything plaid you own (except maybe your uniform’s skirt from Catholic school).

Whether you’ve changed sizes or just didn’t listen to your mother when she taught you how to properly do laundry and have shrunk all your sweaters, it doesn’t matter. If it doesn’t fit, there’s no reason to hang on to it.

If you plan to lose weight — and that’s why you’re saving ill-fitting clothes — it’s much more rewarding to buy a new pair of “skinny” jeans, rather than re-wearing old ones that have been sitting in your closet for two years. Make room for clothes that fit your current shape.