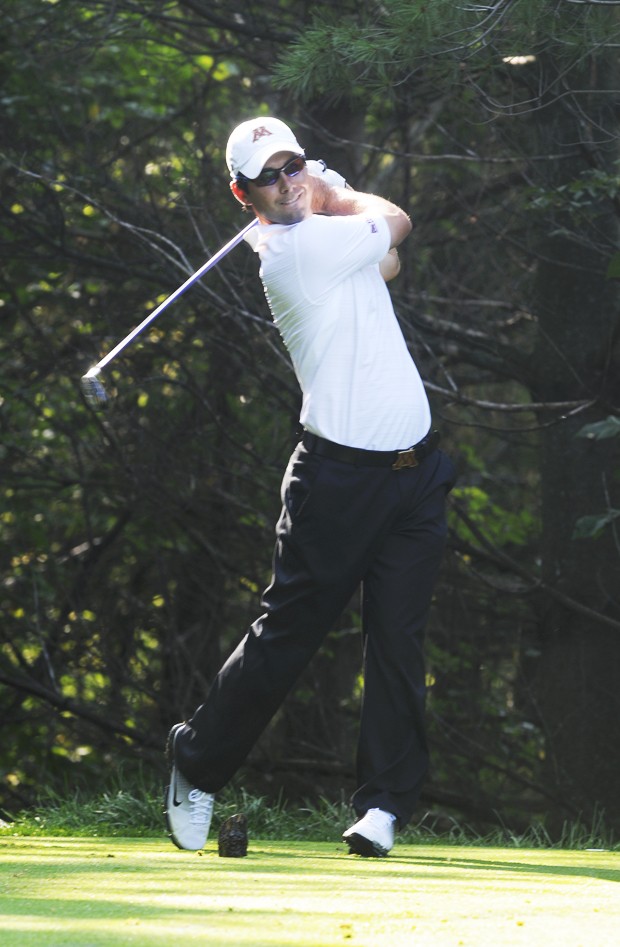 After finishing the first two rounds of the 5th annual Gopher Invitational within striking distance of first place, the Gophers men finished the event on Monday in third at 8-over par . Southern Methodist University came into the day leading by two strokes only added to that margin, ending at 9-under par for a 10-stroke victory and a Gopher Invitational team record. Arkansas edged Minnesota for second place after going into MondayâÄôs third and final round tied with the Gophers at 1-over par. On Monday, SMU Junior Kelly Kraft broke Gopher Ben PisaniâÄôs course record for a single round by shooting a 64, one less than the Gopher senior. Kraft, who won the Conference USA freshman of the year in 2008, entered the third round at 7-under par, one stroke behind the Pisani. But then Kraft put together a course-record, 8-under 64 that included back-to-back eagles and ran away with medalist honors, finishing at 15-under par. KraftâÄôs 54-hole 201 was a Gopher Invitational record as well. Although PisaniâÄôs individual achievement may have been overshadowed, he continued to lead the Gophers by shooting a 71 and 73 in the second and third rounds, respectively, and ended in second place at 7-under par. âÄúBen is indeed one of the best players in the country,âÄù golf director Brad James said, âÄúI think he proved that this weekend.âÄù On Monday, freshman Robert Bell followed an impressive second-round 70 with a 76 to finish 20th overall. Sophomore Derek Chang, meanwhile, rebounded from a first round 88 âÄî the worst score of the tournament âÄî with a pair of even-par 72s. Associate head coach Andrew Tank said that DerekâÄôs comeback demonstrates a lot about his character. âÄúIt was one of those things that you just kind of forget it happened and move on,âÄù Tank said, âÄúHe did that well and came and played really solid golf.âÄù Because of some standout performances over the weekend, the coaches will have difficulty choosing a lineup for their upcoming tournaments. âÄúI think Ben Pisani has solidified his spot,âÄù James said, âÄúAnd because the lineup is so deep, the last four spots are really up for grabs.âÄù Andrew Tank said that this depth could be both good and bad for himself and James. âÄúItâÄôs a good thing because weâÄôve got that many players that are competing and have a chance to play, so that competition will make everyone better,âÄù Tank said, âÄúBut it does make it harder to get that lineup of five determined.âÄù James hopes that this weekendâÄôs finish serves as a learning experience for his players. âÄúI think our guys got a little caught up after getting off to such a great start today and didnâÄôt make some good decisions out there,âÄù he said, âÄúSo there is still some learning there.âÄù