U clerical workers: ‘Chop from the top’

The AFSCME union held a rally on campus Thursday to protest layoffs and possible furloughs. 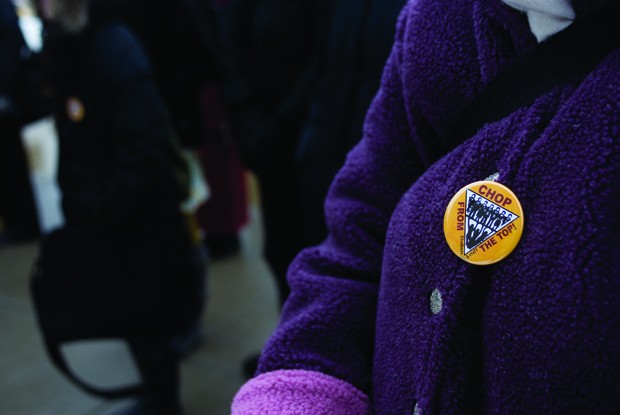 About 60 people gathered in front of Morrill Hall on Thursday to make their opinions about budget solutions heard by administrators. AFSCME Local 3800 , the University of Minnesota clerical workers union, led a rally to protest the UniversityâÄôs response to the budget crisis, including layoffs, pay cuts, tuition increases and rumors of furloughs. âÄúWe want to send a loud and clear message to the University administration: Stop balancing the budget on the backs of staff and students,âÄù said Cherrene Horazuk, AFSCME 3800 chief steward. The theme of the rally was âÄúchop from the top,âÄù and AFSCME members advocated University administrators taking pay cuts rather than implementing furloughs and tuition increases. Horazuk said more than 250 people at the University make salaries of at least $200,000, while frontline staff make an average of $35,000 a year. The UniversityâÄôs budget was reduced by more than $154 million by the state for 2010-2011, and additional cuts are likely, according to University spokesman Dan Wolter . No final budget decisions have been made yet, he said, but President Bob Bruininks plans to send a message to members of the University community next week explaining possible budget solutions. Opposing furloughs for clerical workers was the main issue AFSCME members brought up at the rally. AFSCME members said Bruininks is likely to require staff to take 10 furlough days next year. âÄúFrontline staff live paycheck to paycheck,âÄù Horazuk said. âÄúLosing a paycheck means not being able to pay our mortgage or rent or electric bill.âÄù Administrators have discussed the possibility of furloughs, Wolter said, but no final decisions have been made. AFSCME members will be meeting with University Employee & Labor Relations on Friday, according to Horazuk. Because AFSCME contracts are negotiated by the union, members would have to consent to these furlough days, which the union would not agree to, AFSCME 3800 President Phyllis Walker said. Representatives from Students for a Democratic Society , Graduate Student Workers United , AFSCME Local 3937 Technical Workers, and the Minnesota Coalition for a PeopleâÄôs Bailout were also present at the rally and offered their support for AFSCMEâÄôs efforts. âÄúWe want to offer our full support to AFSCME, because this affects us too,âÄù said Andrew Somers of SDS. âÄúWeâÄôre going to do whatâÄôs right, and the administrators are going to listen.âÄù AFSCME 3800 members are also planning a âÄúDay on the Hill âÄù at the state Capitol on Feb.17 to speak with legislators about the budget issues at the University.