Dinkytown church holds on to hope

An old agreement will buy the congregation time in the efforts to save its property. 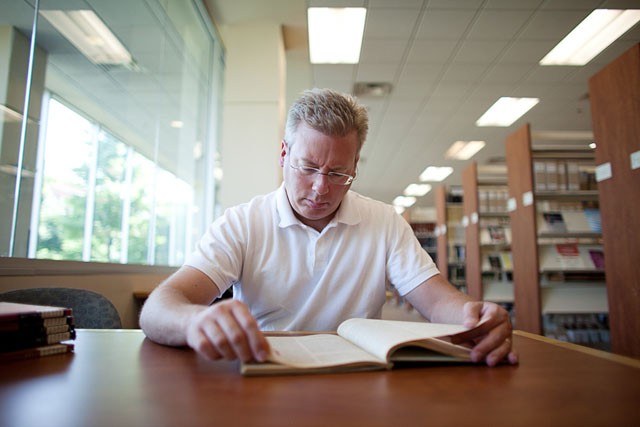 Pastor David Kind spends hours going through district documents Monday in the Concordia University Library. Kind tries to gather all the documents to convince the district not to sell the property to the campus ministry.

The congregation of DinkytownâÄôs University Lutheran Chapel, at risk of being sold by its overseeing district, has more to be faithful in with recent findings.

The Minnesota South District of the Lutheran Church Missouri Synod, the owner of the church, wants to sell it. But the churchâÄôs pastor is using two resolutions âÄî one from 1963 and one from last month âÄî to buy the congregation more time.

Church members âÄúare cautiously hopeful,âÄù said Pastor David Kind, who spent hours digging through archives and found the 1963 resolution that appears to prohibit the South District from selling the property without the North DistrictâÄôs approval.

Nearly 50 years later at its May 17 meeting, the South District board of directors created another resolution compelling its treasurer to hire a real estate broker to find the true market value of the property. It encourages the congregation to buy the property at fair market value.

At the meeting, Kind also gave a presentation about why itâÄôs important not to sell the campus ministry.

âÄúIf we disappear, our students wonâÄôt have anywhere to go,âÄù Kind previously told the Minnesota Daily. About 100 students regularly visit the University Lutheran Chapel, making up nearly half of the congregationâÄôs 219 members.

The boardâÄôs May resolution also stops any further action until the treasurer reports back. Under the resolution, campus pastors will be able to attend the board meeting when the report is made. Previously, the meetings were closed to the public. The South District didnâÄôt comment on the issue.

In search of any document that could help, Kind spent hours going through district documents in recent weeks in the Concordia University Library, where archives are stored. The resolution he found will give the ULC time as it fundraises in case it has to buy the property.

Before 1963, the North and South Districts were one. When they split, the University Lutheran Chapel was not definitively assigned to one or the other, according to a document Kind found.

The campus ministry was to serve both districts, with the South District holding the title and âÄúassuming control and cost of operating.âÄù

ItâÄôs still unclear whether the South District can legally sell the property without the North DistrictâÄôs say. The North District plans to hire a legal expert to explain what the resolution means, said its president, the Rev. Don Fondow.

The North District is also reviewing minutes of conventions since 1963 in search of anything related to ULC, Fondow said.

Aside from sending letters, making calls and updating the situation on a Facebook page dedicated to saving the church, the ULC congregation started a campaign to raise money, should they have to buy the property.

Working with church alumni, about 100 âÄúcottage meetingsâÄù are expected to take place nationally beginning this fall, Kind said. At these meetings, alumni will explain the issue and friends and family can donate.

Kind estimated the property is worth about $1 million to $2 million.

The campus ministry plans to hire its own real estate broker within the next month to find the propertyâÄôs value, since the South District wonâÄôt release its findings until the board meeting in September, Kind said.

At that meeting, the board will review information and present a proposal for the churchâÄôs fate.

The South District tried to sell the property in 2008, but failed because of the bad housing market.

Unlike that attempt to sell, the new endeavor, which started in September, does not involve anyone from the campus ministry. The purpose of selling now would be to make money to open more campus ministries across the state.

âÄúThe most frustrating thing is that we want a seat at the table,âÄù Kind said, adding that the proposal was shocking since it was not an open discussion.

âÄúChurches are supposed to treat each other as brothers and sisters.âÄù