Both gymnasts competed at the NCAA Championships in 2018 and improved on their finishes this season. 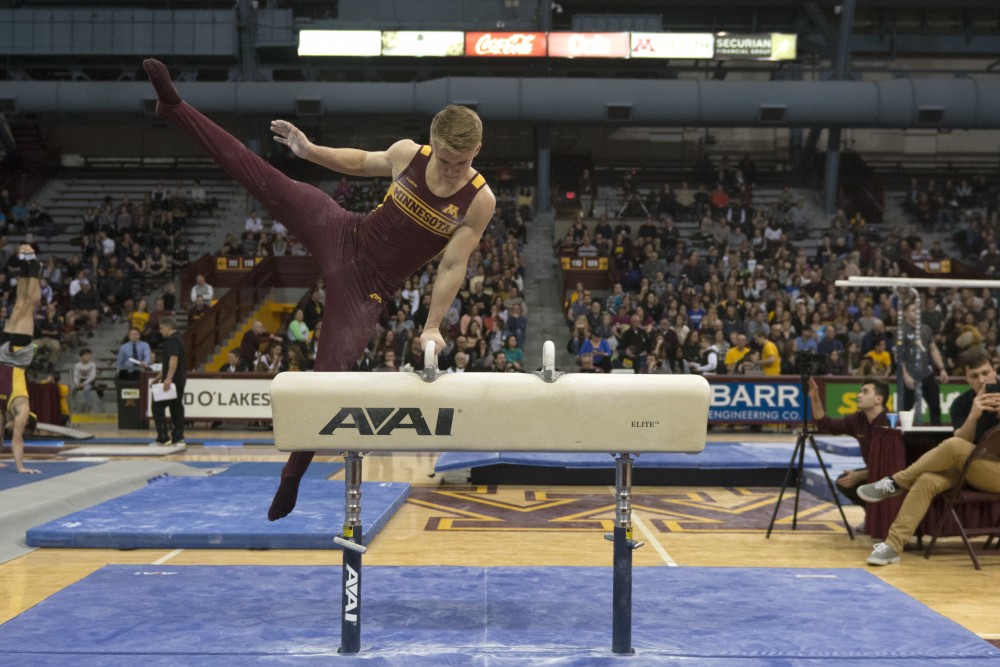 Freshman gymnast Shane Wiskus performs on the pommel horse during a meet on Jan. 27, 2018 at Maturi Pavilion.

This weekend had been on Shane Wiskus’ mind since last year.

He got his first taste of the NCAA Championships as a freshman in 2018, when he played an integral part in the team’s second-place finish. This year, he added to his personal trophy case.

In addition to his showing on parallel bars, he finished second in the all-around for the second consecutive year. Wiskus finished with three All-American honors in total, bringing the sophomore’s career total to six.

Wiskus wasn’t the only Gophers’ gymnast to grab honors for his performance. Senior Justin Karstadt’s 13.800 score on pommel horse was good enough to grab sixth-place overall, which earned him his fourth All-American honors overall and his third on the event.

Surging freshman Ben Eyles saved his best performance for the brightest stage, grabbing his first All-American honor on the vault. Eyles’ 14.800 score is a career-high, and it earned him a fifth-place finish.

“We’re able to bring home some hardware, and I think that’s important in a meet like this,” head coach Mike Burns told Gopher Sports. “It means you’re competitive, it means you’re striving and achieving excellence, and that’s what we did today.”

The finishes by Wiskus, Karstadt and Eyles were the bright spots of an otherwise disappointing weekend. The Gophers failed to qualify as a team for the finals on Saturday. The team finished fourth among their pool of sixth. They needed a top-three finish to secure a spot in the finals.

Lexy Ramler started her Friday morning like any other University of Minnesota student: with a chemistry test. But by the end of the night, Ramler was in a class of her own.

The sophomore, competing as an individual, took to the highest stage in college gymnastics and found herself right at home. She finished the night as the first Gophers’ gymnast in program history to earn first-team All-American in all four events.

Ramler competed as an individual for the second consecutive year and bested her score on every event from 2018.

In Ramler’s final event of the night, she stuck her dismount on bars and let all the emotion of the season come out.

“It hit me at that point that all my hard work I’ve put in the entire season and my past experiences was paying off,” Ramler said. “I’m extremely proud and excited. … I knew I competed really well.”