Tensions within undergrad student government cause concerns for future advocacy 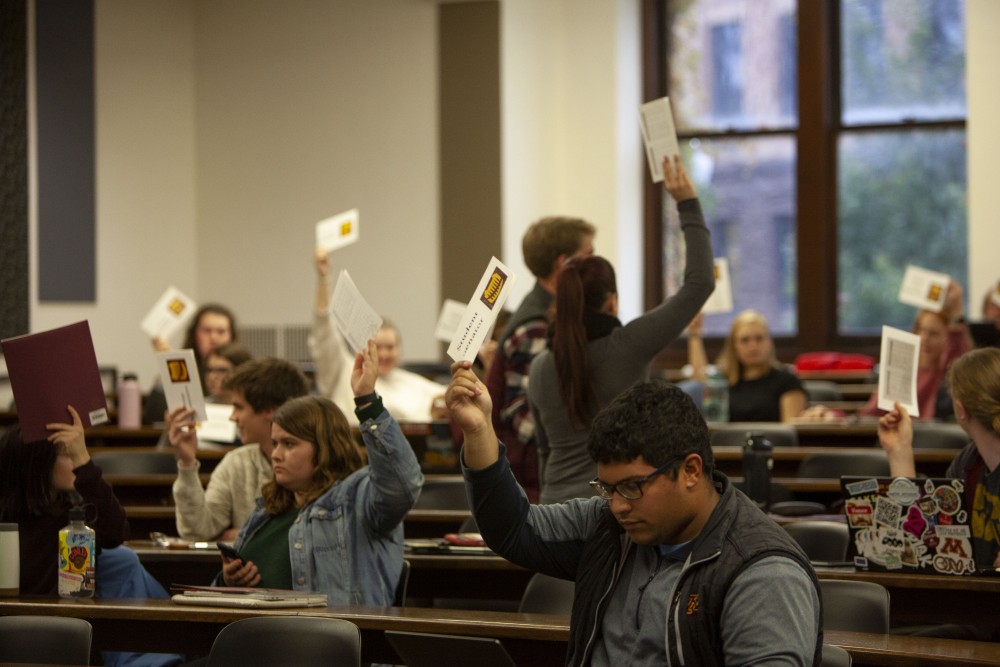 Student senators and representatives vote to move the forum to a closed session in Fraser Hall on Tuesday, Oct. 22. The vote passed, leaving only voting members and press for the remainder of the session.

The Minnesota Student Association, which represents more than 30,000 undergraduate students at the University of Minnesota, is currently in discussion over what some call a lack of direction, leadership and accomplished advocacy inside the organization.

Since the summer, some members say MSA leadership has been inadequate, leading to increased internal conflict throughout the organization. This tension has brought the undergraduate student government to a standstill, lessening the time the group has to advocate for student issues.

At a forum on Oct. 22, MSA members motioned for a closed session. Some members said they did this in order to have a “transparent conversation” about these concerns and allow voting members to voice their opinions about internal conflict freely, especially direct conflict with MSA leadership.

“[T]he President of the Minnesota Student Association has denied repeated and sustained requests to have a meaningful and respectful conversation around organizational culture and organizational portfolio,” the bill states. It also states that “the President’s behavior is largely responsible for the creation of a difficult work environment.” The session, which excluded staff and leadership, follows the resignation of six high-ranking MSA members since July 2019. Some members discussed the possibility of student body president Mina Kian’s resignation.

“MSA is meant to be a check and balance in favor of students … so that if they have ideas on how to make the campus around them better, they have space to go to. When MSA is not functioning, it’s a disservice to students because they can’t enact their vision for our campus,” said former MSA representative Austin Berger, who resigned Oct. 22. Berger called for Kian’s resignation during the closed session.

“People are afraid of retaliation. There is a culture of a fear to speak up,” Berger said at the session. “I think we need someone to just say it like it is.”

“Organizational culture is extremely important and I am more than open to hearing feedback and collaboratively finding solutions that provide better support for student leaders and stronger pathways to advocacy,” Vice President Jael Kerandi said in a statement.

When voting to have the closed session, some members of the forum proposed an action to remove the Minnesota Daily from the meeting. It did not pass.

The general direction of MSA’s current advocacy priorities is a common concern among some who have resigned.

“MSA obviously isn’t the real government, but we still have the ability to effect change on campus. We have relationships with administrators, our voice matters, we were elected to do this,” former Ranking At-Large Representative Andrew Knuppel said.

Addison Scufsa, current MSA student group representative for UMN College Republicans, said most conservative groups aren’t interested in having representatives in a student government, and that this year’s leadership has not addressed issues the groups have been having.