General Mills will no longer clean up TCE pollution in Como

The company says remaining pollution is coming from other sites. 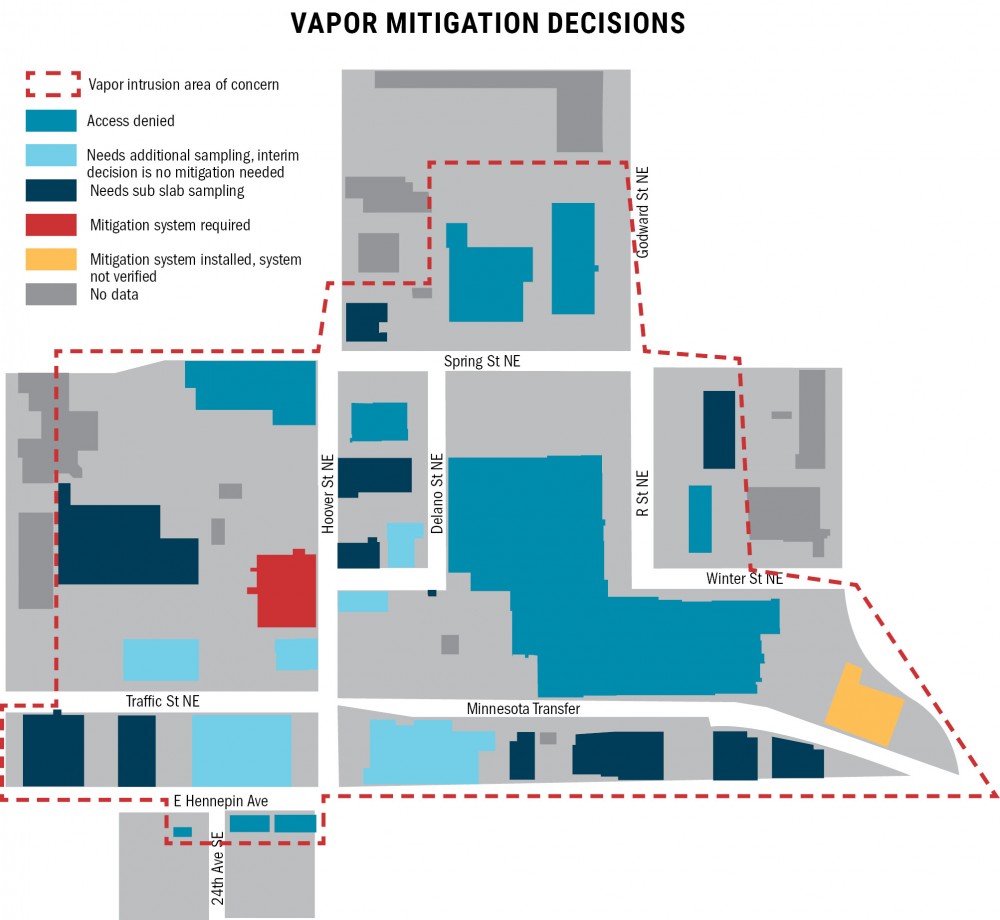 General Mills helped implement systems to reduce the amount of TCE in rising vapor in the Como neighborhood.

General Mills will end efforts to mitigate contamination it left in the Southeast Como neighborhood following the dismissal of a class action lawsuit against the company.

Last month — as more Trichloroethylene, or TCE has been found throughout the neighborhood — the company told the Minnesota Pollution Control Agency it had fulfilled its obligations for its share of the pollution in the neighborhood and claimed remaining pollution is from other sources.

General Mills also demanded the Southeast Como site be unclassified as a state superfund site, which designated it as a polluted area that merits state money for cleanup.

However, the MPCA is working to add the site to the federal version of this list, said Hans Neve, MPCA superfund program supervisor.

Decades ago, General Mills dumped TCE at its site at 2010 East Hennepin Avenue. The TCE has since been found in groundwater throughout the neighborhood.

TCE can increase risk of kidney cancer and has been linked to an increased risk of non-Hodgkin’s lymphoma.

The pollution can last for hundreds of years, Neve said, but its effects can be reduced.

The company has worked with state officials to reduce the chemical’s effects. General Mills also currently faces a lawsuit from residents, though the class-action status was dismissed in 2016.

Previously, General Mills went “above and beyond [in efforts] to mitigate vapor in the neighborhoods,” Neve said.

The company helped implement systems that reduce the amount of TCE in rising vapor and paid to maintain them, he said.

But when MPCA asked them for a plan for further cleanup efforts, General Mills asked for two extensions before announcing this month that it is ending its commitment, Neve said. The letter states that the company will no longer reimburse costs to run the vapor mitigation systems.

“General Mills’ remediation efforts have fully cleaned up the site. Accordingly, no further response actions are necessary,” the letter states.

MPCA is in the process of proposing the addition of the South East Hennepin site as a federal Superfund site, which could force General Mills to pay for cleanup costs, Neve said.

“One of the principles of the superfund is that polluters pay, which works great as long as the polluters can pay and we can find them,” Neve said.

In 2016, the MPCA found additional contamination, which appears to be coming from north of the former General Mills site. Researchers are still confirming the new pollution’s sources and are examining the neighborhood for additional pollution.