Both the men and women had names on the leaderboard in multiple events. 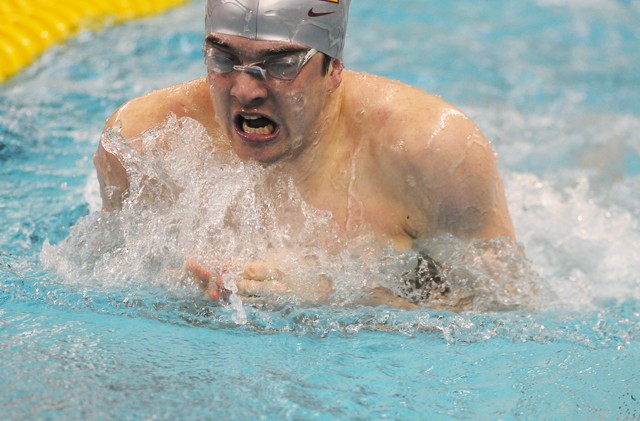 Both the menâÄôs and womenâÄôs swimming teams competed in the Minnesota Grand Prix this weekend, a leg in the series of competitions sponsored by USA Swimming in an extremely competitive environment composed of Olympic-caliber talent. On the womenâÄôs side of the pool, Minnesota had a strong showing, including numerous top-eight finishes throughout the weekend. âÄúWe were very happy we had some very, very good swims and some great performances from some of our underclassmen, again getting some good experience. Overall, I think we were pretty happy with it,âÄù co-head coach Terry Nieszner said of the teamâÄôs performance. Friday, the first in the three days of competition, saw the Gophers win an event. The 800-freestyle relay team composed of sophomore Kristen Steenvoorden , sophomore Hannah Whitehead , sophomore Ashley Steenvoorden and sophomore Marissa Davies won the event in 7:21.36. With a 7:29.76 finish, MinnesotaâÄôs B squad including freshman Lauren Weis , junior Megan Braun , junior Alison Eggers and freshman Loren Brandon took third giving the Gophers two of the top three spots. The menâÄôs team also had some early success at the Grand Prix, including a second place finish in the 1000-free by freshman Michael McBroom in 9:15.88. Two other strong events for the menâÄôs team included the 100-breaststroke, which saw junior Ivan Gutesa finish third in 55.91. On Saturday, MinnesotaâÄôs A squad composed of Whitehead, junior Jillian Tyler , junior Kaylee Jamison and Davies won the 400-medley relay. The B squad finished third with senior Castina Wabeke , freshman Haley Spencer , Braun and Eggers. Meanwhile, the menâÄôs team placed four swimmers in the top 15 of the 50-free, including junior Curt Carlson finishing fourth in 20.26, junior Michael Richards taking sixth in 20.48, junior Kevin Baseheart placing ninth in 20.99 and sophomore Zach Bolin capturing 11th in 21.20. Gutesa continued his strong start to the season, taking fourth place in the 200-breast. A strong 400-medley relay showing for the Gophers men capped a long day of swimming, with the A squad finishing second in 3:18.12 and the B squad taking third. The closing day of the Grand Prix saw both Gophers squads close strong. Whitehead finished third in the 200-back. Eggers added a second place finish in the 100 free in 50:53, losing by just four one hundredths of a second. The 200-butterfly saw four Gophers women place in the top eight, including junior Molly Belk taking second. In the final event of the night, the 4×100-free relay, the womenâÄôs A team finished second as the B Squad took fifth. âÄúThis definitely gives us a feel for what it is to race for six sessions in a row. You got to be up and ready to go every single session and every single race is important,âÄù Nieszner said. The men also had strong appearances in several events. Carlson took second place in the 100-free in 44.04. The 200-fly included three Minnesota swimmers in the top eight with Baseheart taking second, Wold placing third and Kochavi finishing seventh. In the last two events, McBroom outlasted MichiganâÄôs Adam DeJong to place second in the 1650-free and two relay teams placed in the 4×100-free, including the A squad in second (2:59.50) and the B squad claiming fourth (3:07.86). Both teams will not compete again until the Ohio State Invitational in Columbus from Dec. 4 through Dec. 6.