Minnesota hadn't tallied a loss in the Big Ten prior to falling in overtime. 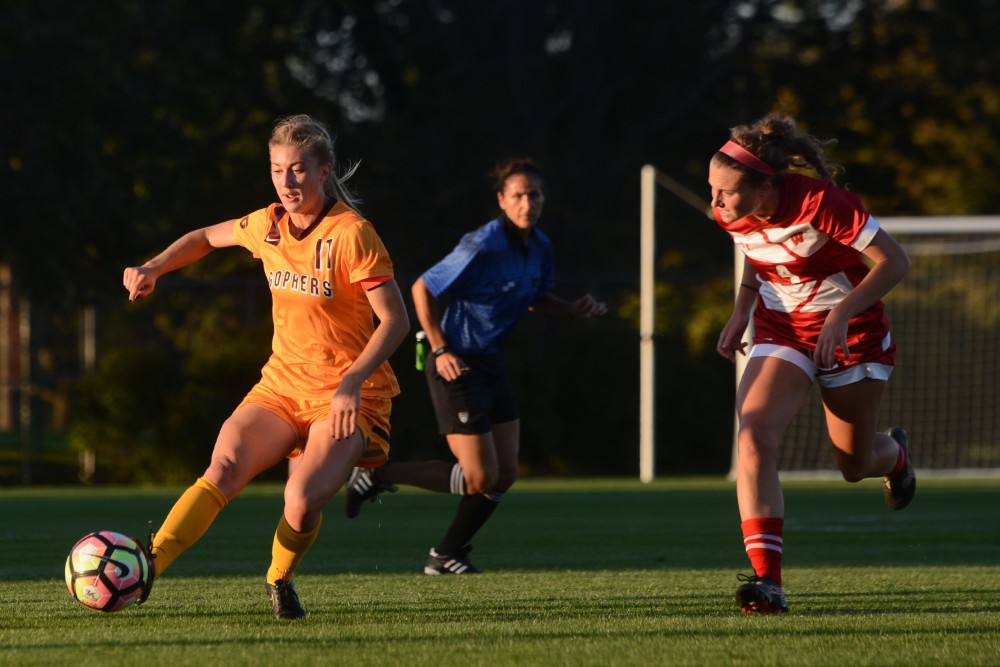 Senior midfielder Josee Stiever rushes for the ball against Wisconsin on Saturday, Oct. 1, 2016 at Elizabeth Lyle Robbie Stadium in St. Paul. Minnesota lost to Wisconsin in overtime 1-0 after both teams went scoreless through the game.

No. 8 Minnesota suffered its first defeat in conference play against Wisconsin in overtime Saturday.

Neither team was able to score in regulation as they headed to overtime level at 0-0.

As the first overtime period was nearing an end, freshman forward Dani Rhodes converted a loose ball off a set piece to steal the victory for the Badgers.

“Set pieces are always difficult, right? Because the ball is bouncing around, and it’s about grit and organization,” said associate head coach Krystle Seidel. “We struggled on the organizational piece of it, and we didn’t see a kid coming, and she put it in the back of the net, and that’s how this game goes. Against the run of play, a set piece can do it for you.”

“This being our fifth game in the Big Ten, I think a lot of our players are used to that physicality, and they’re ready,” senior midfielder and captain Josee Stiever said. “I don’t think you see them getting pushed around. They hold their own ground, and they’re really aggressive, and that’s something that we are real proud of.”

Minnesota found opportunities by making threatening passes. They couldn’t get the final pass or shot right to put away any of their chances.

Wisconsin’s defense, adjusted to Minnesota’s style of play slowed down the Gophers for parts of the game.

“Their defense is very, very aggressive, and they played kind of a high line,” senior forward and captain Simone Kolander said. “For us as attackers, we had to figure out new ways to get in behind them.”

The play was stopped many times due to the number of fouls committed by each team, so the game was often played at a slower pace than the Gophers would have liked.

“The biggest thing during the game was to keep everybody calm,” Kolander said.

Though physical, the game only saw two yellow cards total, both from the Wisconsin side.

Mistakes were made, but staying positive and encouraging each other kept the Gophers in the match.

Minnesota now focuses its attention on the last six games of the regular season, in which they hope to do well enough to make the NCAA tournament.