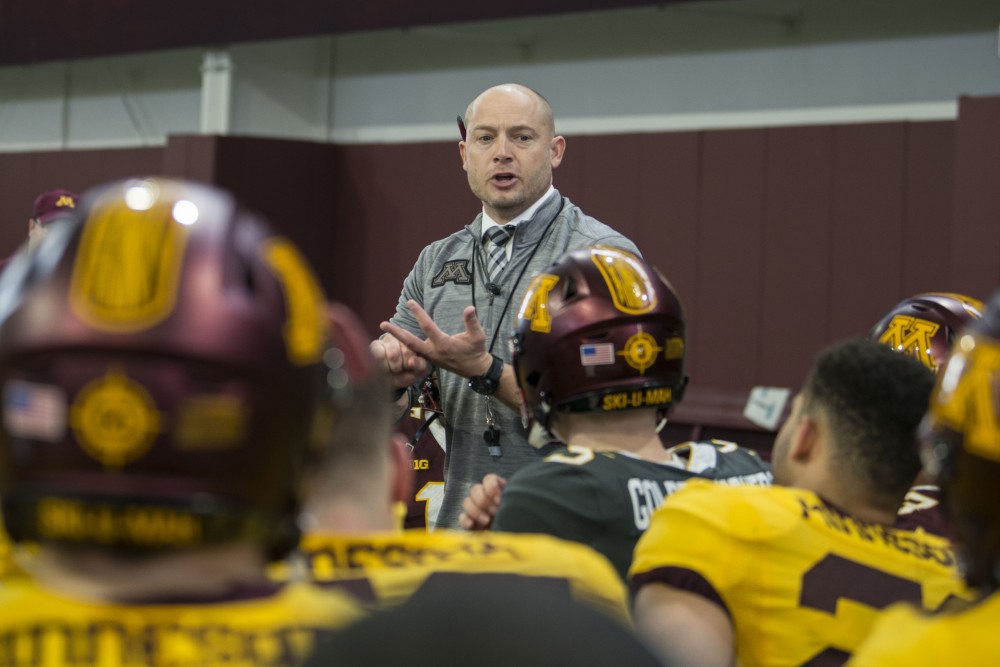 Head coach P.J. Fleck talks to the team on April 13, 2019 in the indoor football practice facility in Athlete's Village.

P.J. Fleck and his coaching staff continue to stay hot on the recruiting trail for their 2020 class.

On Tuesday June 18 the Gophers received a commitment from offensive lineman Martes Lewis. On Thursday, the program received two commitments from defensive lineman Ali Saad and Gage Keys. All three lineman are three-star recruits, according to 247 Sports.

Fleck has seemed to be keen on finding large-bodied offensive linemen since arriving in Minnesota. Lewis, who stands at 6-foot-7, 320 pounds, is just the latest example; the Gophers will also be returning the 6-foot-9, 400-pound sophomore offensive lineman Daniel Faalele. Lewis plays for Merrillville High School in Indiana. He had 10 scholarship offers from schools including Cincinnati, Indiana and Kansas before committing to Minnesota.

Saad is a 6-foot-4, 255-pound defensive tackle out of Dearborn, Michigan. Saad gave his verbal commitment to the Gophers, choosing the University over schools such as Boston College, Illinois, Indiana and Northwestern. In his junior season for Dearborn High School, Saad accumulated 52 total tackles, 13 tackles for loss and eight sacks, according to Max Preps.

Keys, a Hilliard, Ohio native, had 14 scholarship offers, including Cincinnati, Maryland and Rutgers before deciding to commit to the Gophers. The Hilliard Davidson High School defensive end measures in at 6-foot-5, 240 pounds.

Fleck continued to add to his roster as safety Abner Dubar committed on Monday and Itayvion Brown chose the Gophers on Tuesday.

Dubar is a three-star safety, originally from Robbinsdale, Minnesota but played high school football in Texas. Dubar visited Minnesota earlier in June and chose the Gophers over 14 other offers, including Baylor and Washington State, according to 247 Sports.

Brown is a three-star recruit from St. Louis, Missouri. The 6-foot-3, 210-pound outside linebacker ran a 4.83 forty-yard dash at the Opening Regionals in April. Brown is the latest of the five new commits and marks the 21st addition to the 2020 class.