Starting next semester, the school will offer a course that focuses on business in Cuba. 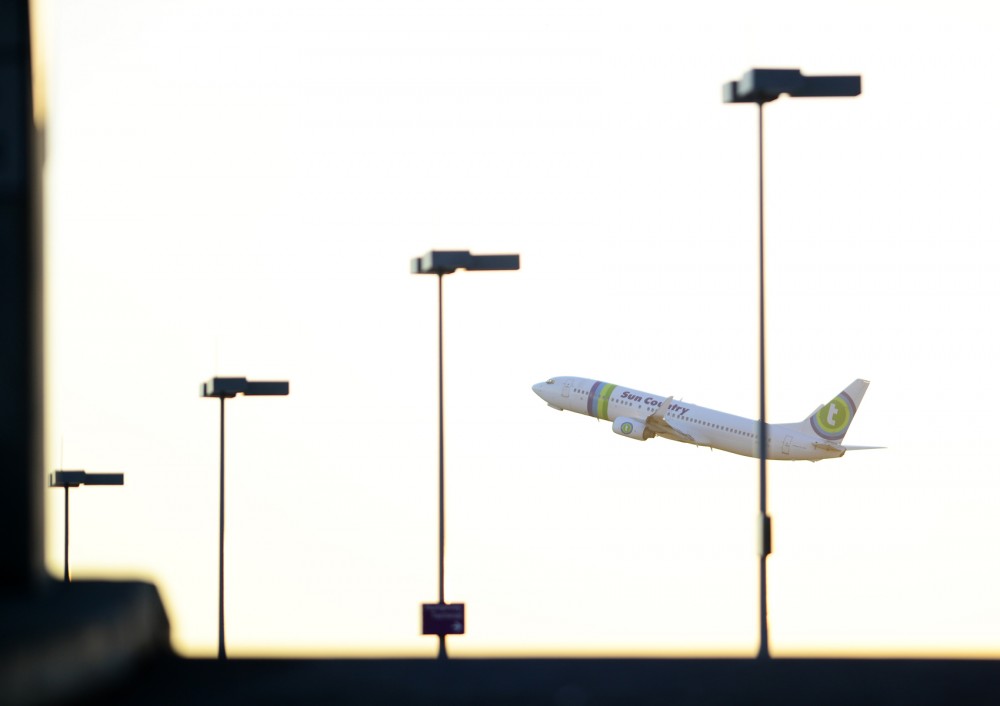 A Sun Country Airlines plane takes off from the Minneapolis-St. Paul International Airport on Saturday. Sun Country is one of many businesses positively affected by the lifting of the United States embargo against Cuba, whose planes are now open to transport customers to and from the country.

Nick Wicker
The United States might lift 50-year-old sanctions on trade with Cuba, and the University of Minnesota is using the change as a teaching opportunity.
U.S. Rep. Tom Emmer, R-Minn., spoke at the University’s Carlson School of Management Tuesday about the Cuba Trade Act, which could partially lift the nation’s embargo.
Now, the Carlson School will shift its Introduction to Global Entrepreneurship course next semester to focus on Cuba.
Minnesota-based international companies Cargill, Medtronic and Sun Country Airlines joined Emmer Tuesday to discuss how the legislation could affect  medical, food and travel industries.
“The question is no longer if the Cuban embargo will be lifted but when,” Emmer said at the event.
Each of the speakers at Tuesday’s talk recently returned from trips to Cuba and discussed the different issues they encountered there such as false notions about America embedded in Cuban culture.
The talk complemented a management course, which will shift its curriculum from Chinese to Cuban business starting next semester, said Jennifer Hawkins, Carlson global
corporate and alumni relations program director and the event’s organizer.
Students enrolled in the Introduction to Entrepreneurship course will study Cuban business practices biweekly, culminating in a week-long spring break trip to the country and three weeks of discussion afterward, Carlson Senior Lecturer and the course instructor, Steve Spruth said.
Spruth said he took advantage of United States’ changing relationship with Cuba to rewrite the course’s curriculum to focus on the country.
“What I’m most excited about is taking students there now when it’s just unfolding,” he said. “If you go to Cuba now, you’re going to see history being made. How many chances do we get to do things like that?”
In order to successfully trade with Cuba, Spruth said it’s important to teach students which business strategies will and won’t work, based off of tactics used by other countries.
“There’s all this research that shows it isn’t just having the experience; it’s processing the experience. It’s making sense out of it,” he said.
Though the class isn’t the first of its kind, Spruth said, few universities have similar programs.
“I guess you could call us fast followers,” he said.
Increases in tourism, along with cigar and rum sales have laid the foundation for Cuba’s future trade practices, Spruth said.
Entrepreneurial Management freshman Isabella Thor attended the event Tuesday and said the discussion convinced her to sign up for the class.
“I think globalization is such an important part of businesses expanding,” she said. “The message I took away was you really go to Cuba with an open mind.”
Delete Image
Align Left
Align Center
Align Right
Align Left
Align Center
Delete Heading