Black U athletes young and old reunite on campus

The event was organized to honor the athletes and help connect younger generations of alumni athletes with their predecessors. 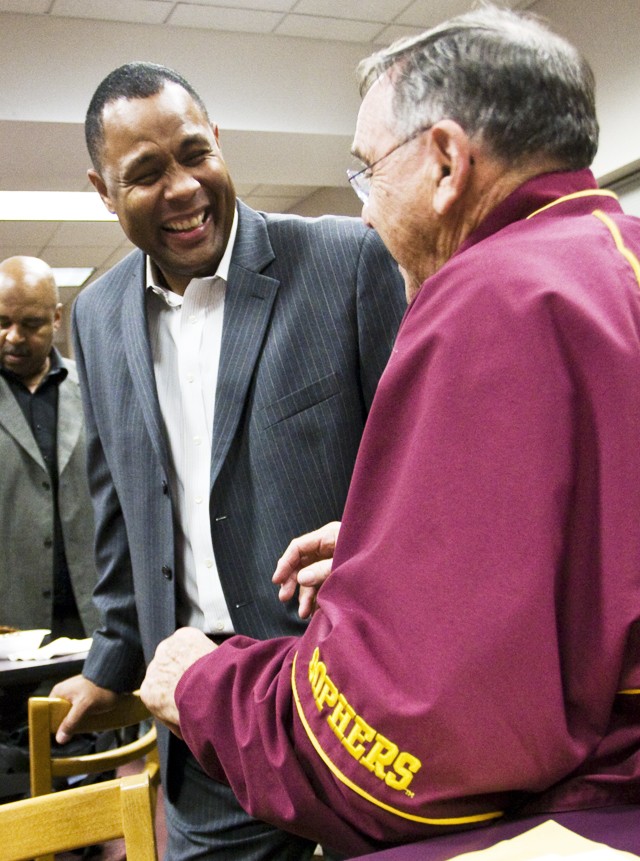 Former U of M athletes reunite for a banquet

It has been more than 50 years since Dick Blakely played football at the University of Minnesota, and when he returned to campus this weekend for a reunion of black Gopher athletes, changes to campus over the years left him struggling to find his destination. âÄúI drove up and down University [Avenue] twice âÄ¦ I went up, came back down, went up, came back down,âÄù he said. Blakely eventually found his way to the Williams ArenaâÄôs Club , where he joined about 50 other black alumni athletes in a celebration of their contributions to the University. The alumni ranged in age, from the 74-year-old Blakely , who played football from 1953 to 1954, to football players who missed playing in the new TCF Bank Stadium by only one or two seasons. âÄúThey should let us play just one game,âÄù said Johnathon Richmond , who played Gopher football from 2000-2005. The event, the first of its kind in recent University history, is meant to honor the athletes and help connect younger generations of alumni athletes with their predecessors, University Athletics Event Coordinator Linda Robert s said. âÄúThese [newer] football players need to know that there are the gentlemen that got it all started,âÄù she said. Duane Dutrieuille, III , who played football from 1983 to 1986, appreciated the gesture of the reunion. âÄú[This] tells us that the University of Minnesota is serious about recognizing our contributions,âÄù he said. Dutrieuille and Dwayne McMullen , who scored the first touchdown in the Metrodome during his 1981-1984 career with the Gophers, hope the reunion will become an annual event. Blakely wasnâÄôt the only alumnus turned around by changes to campus âÄî attendees who played for the University during the 1980s were surprised as well. Basketball player Cynthia Wilson , who played for the Gophers from 1983 to 1987, said while campus staples such as restaurants Stub and Herb âÄòs, Campus Pizza and The Big 10 have remained, a lot of street names have changed. âÄúItâÄôs kind of amazing,âÄù she said. Wilson, like many alumni at the event, made Minnesota her home after her time at the University. FridayâÄôs personal stadium tour and dinner were precursors to a nostalgic pre-game meal Saturday, Roberts said. Planning for the reunion began in September, Roberts said, with a small committee that met weekly. One committee member, Conrad Jones , worked at the University from 1970 until he retired nine years ago. âÄúWhatâÄôs nice about this is people see each other when they havenâÄôt seen each other in 10 [or] 15 years,âÄù Jones said.