A predicted 80,000 participated in similar protests around the world. 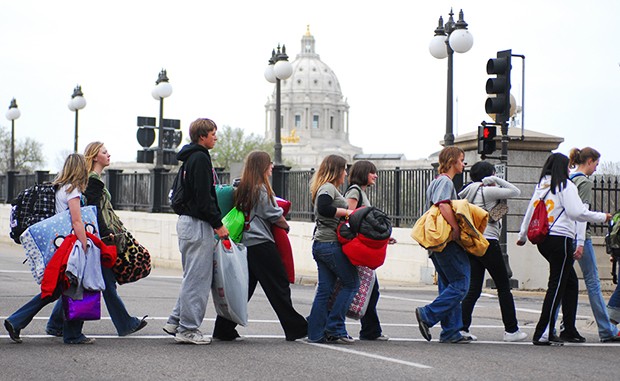 In effort to raise awareness of child soldiers in Uganda, the Invisible Children organization held a nationwide event where participants from various cities “abducted” themselves waiting to be rescued by the media and local legislators.

Hundreds of people of all ages gathered on Saturday evening in Rice Park in downtown St. Paul to speak out for millions of child soldiers of Uganda abducted by Joseph KonyâÄôs rebel army, Lord’s Resistance Army. Invisible Children, a non-profit group, organized the event, âÄúRescue,âÄù to raise awareness of the longest-running war in Uganda and to urge the United States government to bring peaceful resolution to the injustice Kony is causing, said event coordinator Lindsay Luczkowiak. The protest was one of hundreds that took place in 10 countries across the globe. âÄúOver 80,000 people participated to support and they are coming out today,âÄù Luckkowiak said on Saturday of the protests worldwide. The protesters arrived at Rice Park around 3 p.m. Many planned to stay in front of the Capitol overnight and others until they were âÄúrescued.âÄù A successful âÄúrescueâÄù required media coverage and the presence of a prominent political figure. It was not certain when the protestors were going to be âÄúrescued.âÄù Several media outlets, including the Star Tribune, WWCO and KSTP, were present at the protest. One of KlobucharâÄôs aids arrived with a letter from Klobuchar shortly before 9 p.m. Many groups of protestors stood and prayed together on behalf of the child soldiers. Many came fully prepared with blankets and food. A martial artist, Tarah Michilot, laid under her blanket on the grass outside of the state Capitol. She said she was going to stay there âÄúas long as it takes to make a change.âÄù The protesters also simulated the lives of child soldiers in Uganda. The Capitol represented the LRA camp while the protesters represented the children waiting to be rescued. They gathered outside of the Capitol to write letters to President Barack Obama and Sen. Amy Klobuchar, D-Minn. âÄúItâÄôs our responsibility to step in when things get out of hand,âÄù Michilot said. In her letter, Michilot said she asked leaders to pay more attention to what is happening outside U.S. walls. âÄúI am asking for some plan of actions. Anything we can do to get the children out of there and capture Kony or whatever it has to take,âÄù Michilot said. Hundreds of University of Minnesota students participated in the protest. Leah Oliver, child psychology major, said she chose to be there to raise awareness for child maltreatment. Siad Ali, constituent advocate, showed up at 8:40 p.m. to speak to the crowd on behalf of Klobuchar to rescue the protestors. Ali thanked the protestors for abducting themselves. âÄúYour dedication has got my attention and I am inspired for your sacrifice on behalf of the invisible children,âÄù Ali read in a letter from Klobuchar. âÄúAbduction of children by any party or any person or any government cannot be tolerated,âÄù he added. The crowd broke out screaming and many shed tears for joy. The protestors were officially rescued. But many still spent the night in front of the Capitol. The event lasted until 10 a.m. on Sunday.