The Gophers last faced the team in the 2014 Frozen Four semifinal. 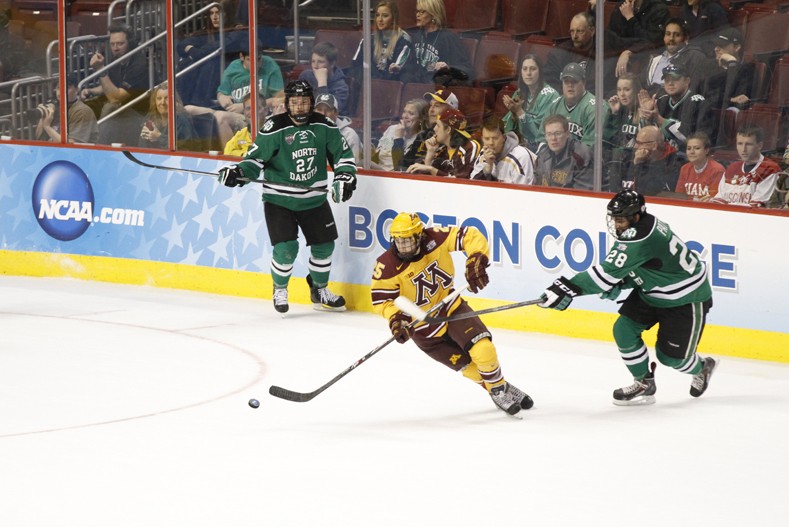 Two of the most accomplished college hockey programs heat up a historic rivlary once again after a long hiatus.

“It’s one of the best rivalries in college hockey,” said senior captain Connor Reilly. “There’s so much history and tradition that makes it so fun and exciting. Fans on both sides are so passionate, its makes for a very memorable weekend.”

Reilly, a redshirt senior, has played against North Dakota before, one of the four players on this roster that have.

Reilly said that this was his favorite series to watch as a kid. The competitiveness and grit of the game was something that he enjoyed watching growing up.

Fans and former players alike will remember matchups like the 1979 national championship game — a team that had current Gophers forward Jack Ramsey’s father Mike on the roster — or Blake Wheeler’s diving goal in overtime in the 2007 WCHA Final Five.

Other than Reilly, Minnesota senior forwards Vinni Lettieri, Taylor Cammarata and captain Justin Kloos have experienced the rivalry firsthand. All were part of the team when Justin Holl’s last-second goal sent the Gophers to the National Championship game in 2014.

The teams stopped playing regular series with each other since both left the Western Collegiate Hockey Association in 2013, so none of the current players have seen a regular-season series with North Dakota yet.

Kloos said he doesn’t want to get in the habit of going down and having to come back against North Dakota like the team has done in recent games.

Players and coaches said that they are nervous and excited for the rivalry to be renewed, but it won’t detract from the “business” aspect of the game.

The Gophers have their toughest challenge of the season so far in North Dakota.

The Fighting Hawks have two of the top-20 scorers in all of college hockey, both Minnesota natives — forwards Brock Boeser and Shane Gersich.

“Your preparation shouldn’t change no matter who you’re playing,” said head coach Don Lucia. “I don’t think you amp up any more for one series versus another. You don’t have to really put in a video of North Dakota to know how they’re going to play … They’re the defending national champions.”

Minnesota has a slight advantage with a 145-130-15 record against North Dakota in all-time meetings. The last came in the 2014 Frozen Four semifinal.

Lucia also said that over the years the rivalry is interesting because the series remains pretty even, and fans can walk into the rink with no idea of what the outcome will be.

“I think everyone has [missed the rivalry],” Kloos said. “I was probably a little shy in my first game, maybe a little nervous. Hopefully I’ve gotten over that stage and I’m ready to go to battle.”